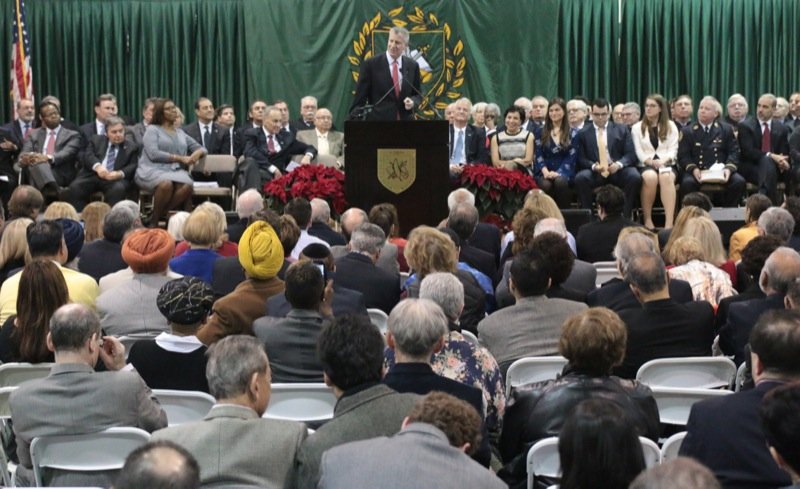 An enthusiastic crowd of over 900 people celebrated on Sunday afternoon with Richmond County district attorney-elect Michael McMahon and his family, in what was billed as an "inauguration ceremony" in the packed gymnasium of the Spiro Sports Center at Wagner College on Grymes Hill.

"He has an open door and an old friend at City Hall." -- Mayor Bill de Blasio.

McMahon will begin duties as district attorney on January 1, 2016.

Mayor de Blasio, who received a standing ovation when he took the mic, recalled that he and McMahon served together on the City Council.

"I saw him so many times ahead of the curve," said de Blasio. "He had the ability to see what's needed and look over the horizon and do something about it."

De Blasio also cited the Island's "heroin scourge," terming it "a challenge we have to take on."

And then came this pledge from the mayor to McMahon: "He has an open door and an old friend at City Hall."

In McMahon's inaugural address, he declared: "We proved the press and pundits wrong and the people right."

Explaining his agenda as incoming district attorney, McMahon pledged to "stop the mindless death of young people to the scourge of drugs," and prosecute the dealers.

He also pledged to "put an end to the shootings and get the illegal guns off the streets," and "bring safety to the battered," among other issues.

Then, turning to de Blasio, McMahon said this:

"Mr. Mayor, let us resolve that Staten Island gets it fair share of resources."