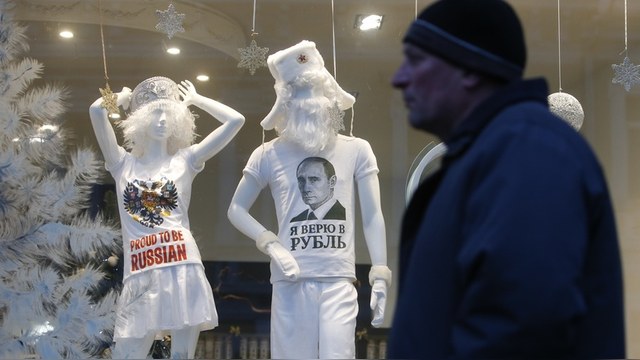 Paula J. Dobriansky was undersecretary of state for global affairs from 2001 to 2009 and is a fellow at the Harvard Kennedy School’s Belfer Center for Science and International Affairs. David B. Rivkin Jr. is a constitutional lawyer who served in the Justice Department and the White House under Presidents Ronald Reagan and George H.W. Bush.

Although international relations are not conducted under Marquess of Queensberry rules and political satire can be expected from one’s foes, intensely personal attacks on foreign leaders are uncommon except in wartime. While Soviet-era anti-American propaganda could be sharp, it did not employ slurs. But in recent years racist and scatological salvos against foreign leaders have become a staple of official Russian discourse.

Turkish, German and Ukrainian officials are cast as sycophantic stooges of the United States. While slamming Ankara at a December news conference for shooting down a Russian plane that violated Turkish airspace, Russian President Vladimir Putin opined that “the Turks decided to lick the Americans in a certain place.” Sergey Glaziev, a senior adviser to Putin, has called Ukrainian President Petro Poroshenko “a Nazi Frankenstein,” and Deputy Prime Minister Dmitry Rogozin compared Ukrainian Prime Minister Arseniy Yatsenyuk to “a rubber doll from a sex shop.”

The ugliest vilification campaign, however, has been reserved for President Obama. Anti-Obama tweets come openly from government officials. Rogozin, while commenting on Obama’s 2015 State of the Union address, compared Obama to a Tuzik, Russian slang for a pathetic small dog. Irina Rodnina , a well-known Duma member, tweeted doctored images of Barack and Michelle Obama staring longingly at a banana.

Nobody in Russia gets to freelance propaganda-wise. Thus, anti-Obama rants, even when coming from prominent individuals outside government, have Putin’s imprimatur. Russian media personalities, including Dmitry Kiselyov, the host of the widely viewed “News of the Week” TV roundup, often deliver racist slurs, as compiled by Mikhail Klikushin on the Observer Web magazine. Evgeniy Satanovskiy, a Russian academic and frequent guest on Kiselyov’s program, recently also referred to Obama as a “monkey,” prompting derisive laughter and applause from the audience. Meanwhile, the famous nationalist comedian Mikhail Zadornov regularly deploys the term “schmoe” — a slang Russian prison acronym for a person who is so debased he deserves to be defecated upon — alongside Obama’s name. “Obama schmoe” has become ubiquitous enough to be scrawled on the runway of Russia’s Latakia air base in Syria.

Russia’s print and electronic media channels carry stories depicting Obama as lazy and incompetent. Shops sell bumper stickers, posters, T-shirts and cardboard cut-outs with images of Obama as an ape and a chimney sweep. One Russian city held a contest inviting children to kick Obama’s cardboard image. Obama has been burned in effigy on numerous occasions, and zoo animals have been named after him, including a black piglet at the Volgograd zoo.

This despicable onslaught is not just the random venting of a narcissistic Kremlin leader but also an indispensable component of Putin’s efforts to mobilize domestic support for his policies and enhance his standing. The fact that this propaganda campaign is working — Putin and his policies remain popular — is attributable to several factors.

First, the Kremlin controls the news and entertainment media. Journalists who have refused to toe the official line have been fired, jailed or killed. This state monopoly, particularly when combined with the palpable failure by the West to communicate effective rebuttals to Russian audiences, has enabled the regime to mold Russian perceptions on every major policy issue.

Second, these propaganda themes skillfully capitalize on nostalgia felt by the Russian people about Moscow’s imperial past, which is often perceived in a highly idealized light. The repression of the Soviet and Czarist periods has been played down, and a key related theme is that Russia has always been the victim of foreign machinations and intrigue.

But Putin’s propaganda campaign also bespeaks of certain desperation. The Russian economy is in free fall, buffeted by both falling oil prices and Western sanctions. Fuel shortages and the resulting disruption of deliveries of key commodities pose a particular challenge to the Kremlin. Corruption and mismanagement are rampant and have drawn the ire of the Russian people.

There is widespread labor unrest in cities where private-sector workers have not been paid for months at a time. There also have been months of strikes by long-distance truckers protesting extortionist road fees and corruption. Even fire and rescue first responders employed by the federal Ministry of Emergency Situations have not been paid in months. That emergency personnel in such major cities (and places where revolutions have started in Russia’s past) as St. Petersburg and Moscow, with responsibilities for handling public protests, have gone without pay underscores the precariousness of Russia’s finances and the risks it is forced to incur.

Against this backdrop, and lacking either democratic or ideological legitimacy, Putin’s government is increasingly brittle. As the Kremlin doubles down on its aggressive foreign policy and increases domestic repression, it has also intensified its global propaganda efforts. Moscow has heavily invested in its broadcasting assets, with the satellite network RT being the pivotal component, giving it an unprecedented ability to reach domestic and foreign audiences.

All Americans should be outraged by the Kremlin’s messaging campaign and support a robust U.S. response. To present such a response effectively to global audiences, Congress should promptly enact bipartisan legislation proposed by House Foreign Affairs Committee Chairman Edward R. Royce (R-Calif.) and ranking Democrat Eliot L. Engel (N.Y.) to revitalize America’s public diplomacy infrastructure. Winning the global battle of ideas is an essential part of fostering a stable democratic world order. Consistent with our core values, the United States must lead in challenging Moscow’s racist propaganda and highlighting the moral narrative of democracy, tolerance, human rights and rule of law.