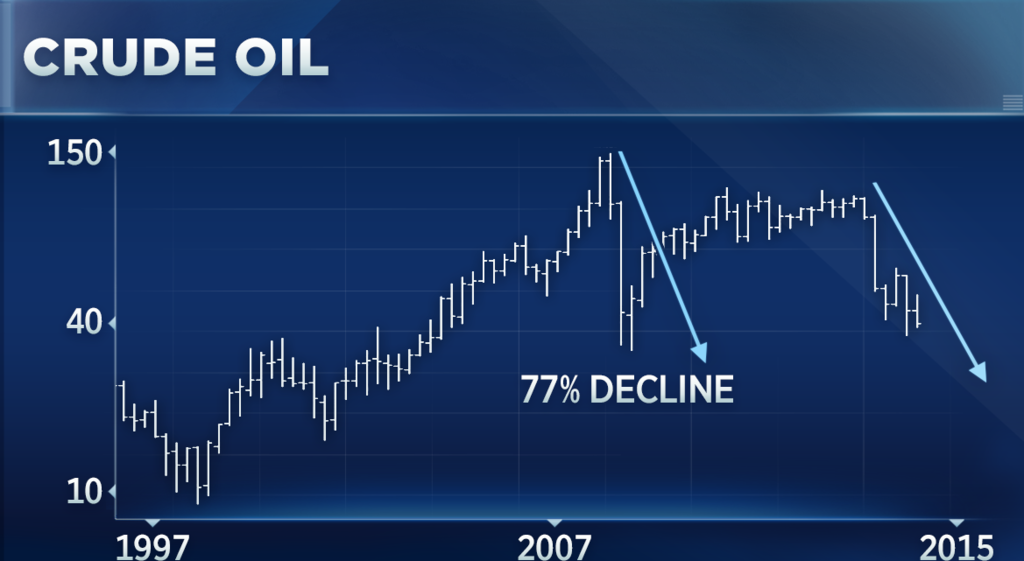 Crude oil futures (New York Mercantile Exchange: @CL16F) briefly dipped below $40 a barrel on Wednesday, as crude's November drop continues. And one technical analyst sees oil falling much lower even from these levels.

Todd Gordon of TradingAnalysis.com begins by noting that in the financial crisis, crude oil fell 77 percent from its highs.

"Technicals say that in a good, solid pullback we should see an equal-leg push in the current move lower," Gordon said Wednesday on CNBC's " Power Lunch ." "A 77 percent drop from the reactionary high up at about $114 puts us at $26 in the crude oil market."

A $26 print on crude "is entirely possible in this environment in strengthening dollar, in a potentially falling stock market in the near future," Gordon added.

A further 35 percent decline in crude is not as far-fetched as investors might think, said Stephen Schork, the editor of the Schork Report.

"At $40, we already know we're at a level that's not economical," Schork said, meaning that the price of oil is lower than the supply and demand environment would suggest.

While that would mean higher oil in the long term, it also means that in the short term, oil could "absolutely" fall even lower to a level that would be even further out of whack.

Read More Oil: The case for low for longer prices

In fact, Goldman Sachs said in a September report that the heavy supply of crude oil could potentially drive the commodity down to $20 per barrel in a bear-case scenario.

Still, traders aren't exactly playing for that outcome. The options market imply a mere 4 percent chance that oil will find itself below $27 in March.