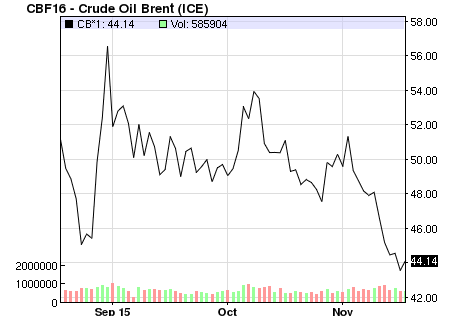 Crude oil futures settled down more than 2 percent on Tuesday, resuming their slide after a one-day pause, on bets U.S. inventories rose for an eight straight week.

Before the API report, a Reuters poll of analysts forecast a build of almost 2 million barrels in U.S. inventories for the week ended Nov. 13, bringing crude stockpiles to near April's record highs above 490 million barrels.[EIA/S]

The poll came ahead of official inventory data due on Wednesday from the U.S. government's Energy Information Administration (EIA).

Most traders and analysts expect the two benchmarks to fall further in anticipation of higher crude builds in the coming weeks.

WTI futures have been under $50 longer now than they were during the height of the financial crisis in 2008/2009.

Options on U.S. crude expired on Tuesday, with open interest mostly gathered around put options, which give the seller the right, but not the obligation, to sell WTI at both $40 and $45 a barrel. <0#CLc1>

Brent's premium over U.S. crude CL-LCO1=R narrowed to below $2 a barrel, versus the nearly $4 level at the start of November. A narrower spread between the two tends to encourage a greater flow of oil from abroad into the U.S. market, as crude grades pegged to the pricier Brent become more affordable.