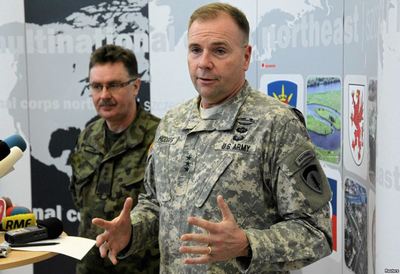 Hodges also said some 29,000 Russian troops are in Crimea, which Moscow annexed from Ukraine last year.

Hodges said in Berlin on March 3 that helping Ukraine with weapons would increase the stakes for Russian President Vladimir Putin at home.

He added that "when mothers start seeing sons come home dead, when that price goes up, then that domestic support begins to shrink."

Hodges said what Ukraine wants "is intelligence, counterfire capability and something that can stop a Russian tank."

The White House still hasn't decided whether to send arms to Ukraine, and Hodges reiterated Washington wanted a diplomatic solution.

Hodges also said U.S. plans to train three Ukrainian battalions had been put on hold to see if a cease-fire deal forged last month in the Belarusian capital Minsk will be fully implemented.

Meanwhile, U.S. President Barack Obama and European leaders have agreed that a "strong reaction" would be necessary if the Minsk cease-fire agrement is violated.

French President Francois Hollande's office said that in a March 3 video conference, the leaders underscored their support for the Minsk agreement.

"They have agreed that a strong reaction from the international community would be necessary in case of a major breach of the process put in place in Minsk," it said in a statement.

White House spokesman Josh Earnest said Obama used the call to condemn Russia for not following through on its agreements.

"It was an opportunity ... for the president to condemn the continuing failure of Russia and the separatists it backs to abide by the commitments to which they agreed," Earnest said.

The leaders of Britain, Germany, and Italy also participated in the conference, as did European Council President Donald Tusk of Poland.

The French statement also said the parties wanted to bolster the resources of monitors from the Organization for Security and Cooperation in Europe (OSCE).

European leaders on March 2 said they agreed that the OSCE needed a broader role as observers of the cease-fire agreement and of the removal of heavy weapons.

Ukraine and Western governments have accused Russia of sending troops and weapons to support separatists in eastern Ukraine in violation of the Minsk agreement.

Later this week, Ukraine's parliament is expected to back Ukrainian President Petro Poroshenko's request for international peacekeepers to monitor the conflict.