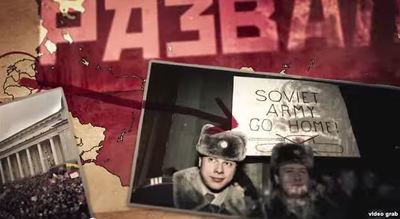 Abellicose video gushing over Russia's invasion of its neighbors is making the rounds online, describing Russia as a civilizing force and warning the world not to "mess" with Moscow.

The clip, explicitly titled I'm A Russian Occupier, has been viewed almost 3 million times since being posted on February 27.

It was first uploaded to social networks by a blogger named Yevgeny Zhurovin the Siberian city of Novosibirsk but gained wide attention after Dmitry Rogozin, a Russian deputy prime minister and former ambassador to NATO known for his harsh anti-Western rhetoric, promoted the video on his Twitter account.

Led by the United States and European Union, a number of countries have imposed sanctions against Russia over its actions in Ukraine, where Vladimir Putin's government annexed the Crimean peninsula and critics accuse it of continuing to foment, arm, and support pro-Russian separatism.

Russian officials have aggressively employed nationalism and anti-Western sentiment in public statements and within state-dominated media to rally support for the Kremlin's foreign-policy goals. They have also long stoked nostalgia for some aspects of the former Soviet order, in which Russian politics and culture held primacy.

The 2 1/2-minute film, which uses computer animation and graphics, defends Russia's Soviet-era occupation of neighboring countries by trying to demonstrate that these nations are far worse off since breaking out of Moscow's orbit:

Citizens of the Baltic states, it claims, are now "cleaning toilets in Europe" while Central Asia allegedly lives off U.S. credits and the sale of marijuana.

It accuses Ukraine of destroying the industries painstakingly built by Russians and installing a "dictatorship" -- a jibe at the Western-friendly government that came to power in Kyiv following the protests that ousted pro-Russian President Viktor Yanukovych.

"Yes, I'm an occupant and I'm tired of apologizing for it," the video says. "I'm an occupier by birthright."

It goes on to reject Western democracy and values, including gay rights, and warn Russia's critics.

"I'll politely warn you for the last time: Do not mess with me! I build peace, I love peace, but more than anyone, I know how to fight."

The film ends with that message appearing to be sent to U.S. President Barack Obama.