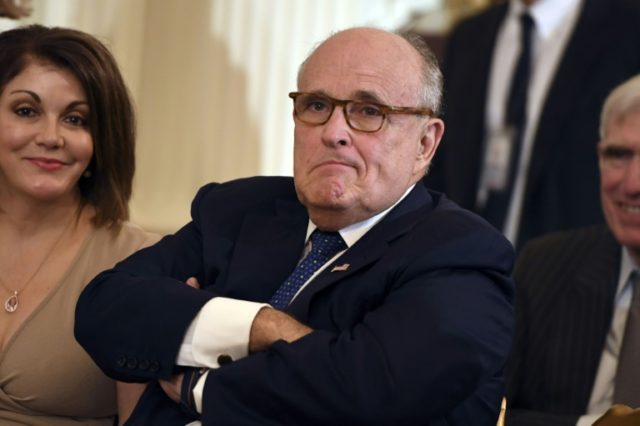 Attorney for President Donald Trump, Rudy Giuliani called Sunday for an investigation into where and who originated claims that the Trump campaign colluded with Russians to influence the 2016 election.

“I say this is complete and absolute victory,” Giuliani told Fox News Sunday afternoon, calling the victory “way beyond anybody could have expected a year ago with all this crazy fake news that’s going on.” His comments came just following news that special counsel Robert Mueller’s investigation into Russian meddling in the 2016 election found that there was no collusion between Russians and Donald Trump or Trump campaign associates.'

“Absolutely no collusion by anyone in the Trump campaign so you have to wonder why did this investigation start in the first place and why did we waste $40 billion,” he questioned. “Second, no obstruction.”

Giuliani’s reaction was briefly interrupted for comments by President Donald Trump on the Mueller findings as he stood on the tarmac just before taking off from Florida to return to the White House. “There was no collusion with Russia, the most ridiculous thing I’ve ever heard,” Trump said, adding that there was no obstruction. “It’s a shame the country had to go through this,” said Trump, adding that it’s a shame he had to go through this as president. He expressed hope that the “other side” would be looked in to.

“President is absolutely correct to be very, very upset,” Giuliani said after the president’s statement to reporters. “It is absolutely definitive that he was being investigated for a crime that never happened. There was never any collusion. I can tell you that because I was on that campaign.”

“One of the reasons I’ve been so passionate is I know there was no collusion. I’ve known this was a phony charge from the very beginning,” he asserted. “And we put the United States through this?” he pressed calling out Democrats for making “exaggerated statements” claiming they had evidence that the president colluded.

“I think there has to be a full and complete investigation with at least as much enthusiasm as this one to figure out where did this charge emanate, who started it, who paid for it,” Giuliani proposed. He suggested the Justice Department could run that investigation and saw no reason to drag the country through another special counsel investigation.