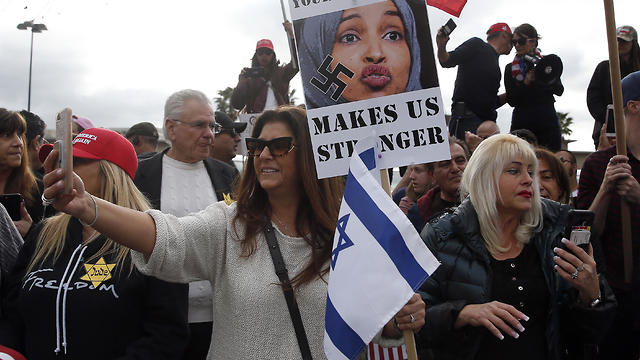 Hundreds of protesters rallied outside an event where a congresswoman spoke to a Muslim-American civil rights group.
The demonstrators were protesting the presence Saturday of US Rep. Ilhan Omar of Minnesota at the fundraising event for the Council of American-Islamic Relations of Greater Los Angeles.
Omar has drawn criticism for her recent remarks on Israel, including comments that American supporters of Israel are pushing people to have “allegiance to a foreign country.” Omar later apologized, saying “anti-Semitism is real and I am grateful for Jewish allies and colleagues who are educating me on the painful history of anti-Semitic tropes.”
The Los Angeles Daily News reports that the protesters lined a sidewalk area outside the Hilton hotel in Woodland Hills, waving Israeli flags. A smaller group of counter-protesters held up signs in support of Omar.

A draft of the resolution does not rebuke Omar, a Somali-American and one of two Muslim women in Congress. But it sets out the history of anti-Semitism and bigotry in America, including anti-Jewish tropes about divided loyalties. The document also rejects bigotry directed against Muslims after the September 11, 2001, attacks.

It says the House “rejects anti-Semitism as hateful expressions of intolerance that are contradictory to the values that define the people of the United States.”