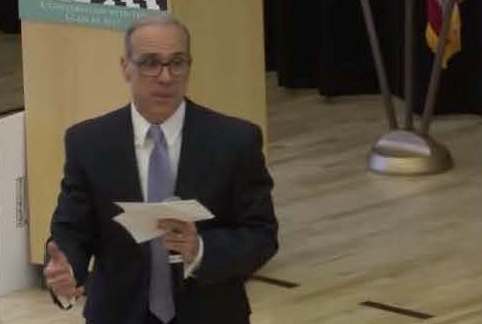 On Wednesday, BP Oddo hosted "A Conversation with the Class of 2017" at P.S. 48. At the event, student reporters from Island high schools asked BP Oddo about quality-of-life issues affecting Staten Island, which opened up a back-and-forth dialogue between BP Oddo and the students.

It's an annual discussion where he invites high school seniors throughout the borough to discuss issues they're currently facing. Some of the issues discussed include substance abuse in schools, litter control and immigration. One student from India said she's worried she won't qualify for certain scholarships because she's an immigrant.

"For a little old borough president and a young high school student, it was a candid conversation, maybe a more honest conversation, that is happening in the halls of government somewhere else. But I think it demonstrates the complexity of the issue," said Oddo.

Also  students were interested in were varied and ranged from the education to transportation.

In addition, Chris Pansini of the YMCA Counseling Service spoke to the students about his own battle with addiction and emphasized the importance of treatment.

The "Conversation" concept was born in 2015 and has become an annual event.