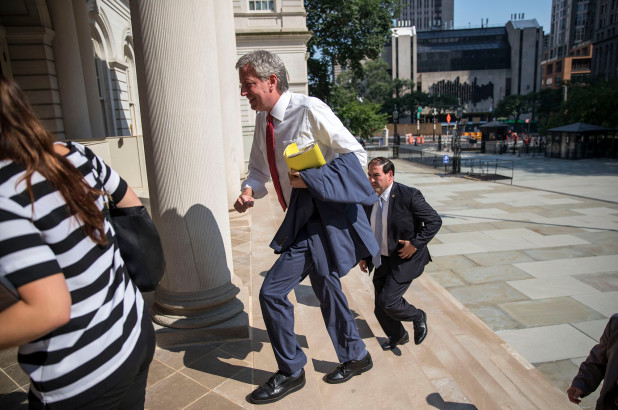 If this keeps up, Mayor Bill de Blasio won’t even be able to get into City Hall without having to show some ID.

As The New York Times reported Wed­nesday, de Blasio’s public schedules show he’s been spending ever less time at the office. His first year, he made it to City Hall an average of 19 days a month. But his attendance has dropped steadily ever since; he’s now down to just 10 days a month.

He has shifted ever-more meetings to Gracie Mansion, which he calls “a very productive place to get work done.” City Hall, he complains, is “filled with a lot of interruptions and distractions.”

“Distractions.” Let that one sink in.

No wonder the mayor has time and again protested that he first learned about one or another administration scandal from the newspapers.

De Blasio insists he’s focused on his job “every hour, every day” no matter where he is, but his schedules show that, in the past 12 months, he hasn’t met with his heads of Buildings, Parks, City Planning, Youth and Community Development or scandal-scarred Children’s Services.

And his two meetings Monday on the way to firing Emergency Management Commissioner Joe Esposito — one of his most vital execs — were their first one-on-ones in two and a half years.

Then, too, in what sure seems a sign he likes long weekends, he’s been absent from City Hall for 35 of the first 39 Fridays of 2018.

Hey, it makes travel easier — and de Blasio has been spending more and more time away from the city while trying to raise his national profile.

City Hall is the seat of government; it’s impossible to be hands-on if you’re never there. Sorry, Mr. Mayor, but showing up to work goes with the job.