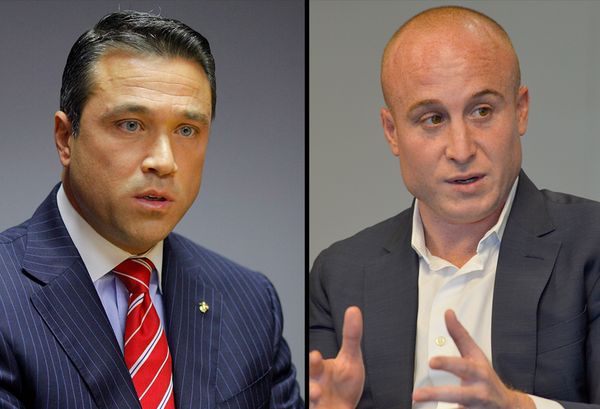 CITY HALL -- Members of the newly elected Congress are still waiting to be sworn in, but it looks like a 2020 battle is already heating up in Staten Island’s congressional district.

Congressman-elect Max Rose recently sent an email urging constituents to donate to his campaign, warning his base they needed to gear up because former Republican Congressman Michael Grimm, who once held Rose’s seat, is planning to challenge him in 2020.

“We’re less than a month past election day and Michael Grimm is already talking about potentially challenging Max in 2020,” Rose’s email to constituents read. “Max hasn’t even been sworn in and the Republicans and special interests are already lining up to take him out. It truly speaks volumes about the absurdity of our broken campaign finance system that we have to get right back to asking folks like you to step up with a donation.”

Grimm, who has since gone back to consulting, said the door to taking back his congressional seat in 2020 isn’t just open -- it’s “wide open.”

‘IF HE SURPRISES ME’

If Rose does a good job and passes legislation that helps constituents in the 11th district, Grimm said he will leave the Democrat alone.

But he said if Rose does not do a good job in his opinion, and only tells constituents what they want to hear, he plans to challenge the Army veteran.

“It’s just a matter of the type of job he does,” Grimm said. “If he surprises me, does a stellar job, then why would I want to challenge him?”

In the weeks following the Nov. 6 election, Grimm said constituents, members of the Staten Island Republican Party and representatives from Congressman Daniel Donovan’s campaign “blew up” his phone to tell him he would have beaten Rose if he ran against him. Some also encouraged Grimm to run against Rose in 2020, Grimm said.

Recalling his experience getting the Homeowner Flood Insurance Affordability Act of 2013 through Congress and to the former President Barack Obama’s desk as well as helping secure $60 billion in aid for Superstorm Sandy victims -- Grimm said both feats made him a lot of enemies.

‘YOU MAKE SOME ENEMIES’

If Rose is not willing to go up against members of his own party and put the needs of 11th district constituents first, Grimm said he won’t just run against Rose, but he will beat him too.

”I pushed and I fought and again sometimes you make some enemies doing that, but that’s being an effective leader and being an effective representative,” Grimm said. “If he does some of the things like that I’ve done, then I wouldn’t run against him, but if he ends up being the empty suit that just tells you all the platitudes and the things that you want to hear, which is what I think he’s been doing, then … I won’t just run I’ll beat him.”

Grimm lost to Donovan on June 26 by nearly 30 points in a Republican primary where the two candidates were constantly jockeying to align each other with President Donald Trump.

Grimm spent eight months in federal prison beginning in 2015 after pleading guilty to a single count of tax fraud related to a Manhattan health food restaurant he co-owned before taking office.

While under indictment, Grimm won re-election in November 2014.

“I know Michael has a lot of free time on his hands, but it’s a shame that he and others won’t even wait for Max to be sworn in before trying to take him out,” Rose campaign spokesman Kevin Elkins said. “It’s exactly what’s wrong with our politics. Max refuses to take money from federal lobbyists and corporate PACs and that’s pissed off a lot of people in Washington. That means we need to build an operation that will overcome everything Washington’s special interests and Republicans throw at him - and that’s exactly we are doing.”

Rose joined a wave of Democrats who took back the House of Representatives when he won New York’s 11th congressional district on Nov. 6. The district voted overwhelmingly for Trump in 2016. Rose beat Donovan, a three-year incumbent, by 6 percentage points.