Graveyard of emperors: Putin should heed the fates of Russia’s leaders 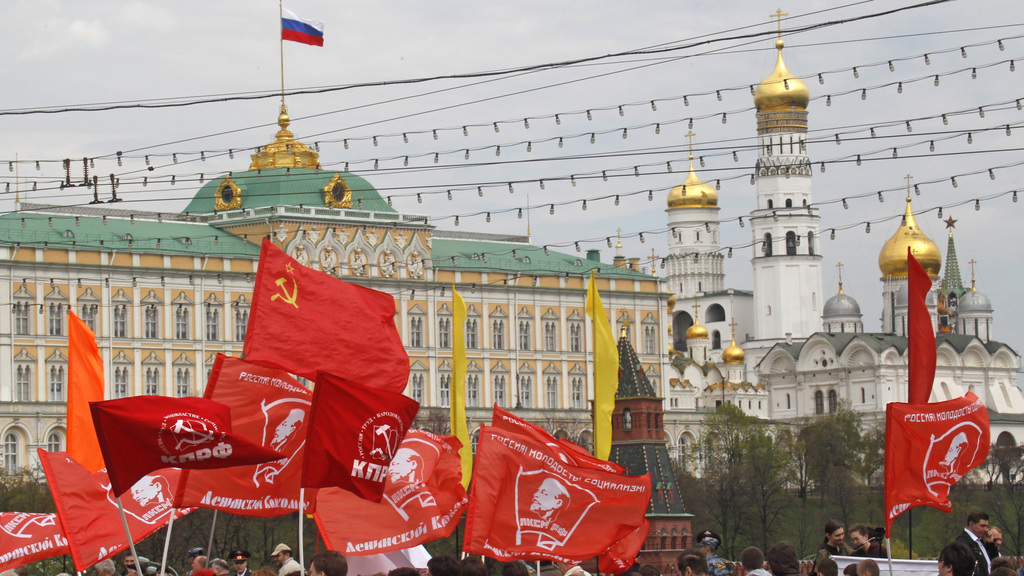 “Whom do we plan to invade?” Nikita Khrushchev asked during his inspection of a Moscow military base in Sep. 1964. “Nobody,” the Soviet leader, and my great-grandfather, said, answering his own question. He stared disapprovingly at the rows of tanks and rocket launchers.

“These are costly weapons, while people are losing their pants,” he grumbled. A few years prior, he had appointed a new KGB minister, Vladimir Semichastny. Semichastny was a civilian—a first in Soviet history.

The following month, Khrushchev lost his own pants. He was forced into retirement, essentially for an attempt, however imperfect and impulsive, to decentralize the communist monolith. The army generals and the KGB (civilian Semichastny quickly turned into a secret policeman) didn’t want to relinquish influence over the military industrial-complex, which kept a firm grip on Russian politics for centuries.

After Joseph Stalin’s death in 1953, Khrushchev thought the unquestioned rule of the security forces was gone for good, but he underestimated how strong a chokehold the isolationist tradition has on Russia. Mikhail Gorbachev, another reformer who, through perestroika, wanted to move Russia towards a less militant future, had Soviet hardliners turn on him in 1991. Even if, at the time, the coup failed to revive conservative communism, Gorbachev—accused of being a Western stooge—still lost his post as a result.

Learning from the fates of his predecessors, Vladimir Putin, a retired KGB operative, knows who to side with in order to stay in power, and whom to fight with to keep his strongman-image alive. Hence Putin’s continuous, and rather mercurial, escalation of the Ukraine crisis—he insists on peaceful solutions, yet his military assists the anti-Kyiv rebels in eastern Ukraine.

Russia, of course, denies the engagement, instead accusing the West of stirring protests in Kyiv last year. Crippling economic sanctions imposed on Russia as a result of Putin’s annexation of Crimea aren’t seen as punishment for flouting international law. They are seen as a Western plot to undermine the Russian state.

Putin is resolute that “such tricks do not work with Russia, have never worked before, and will not work in the future.” Adding fuel to a blazing fire, his security chief, Nikolai Patrushev, morbidly asserted the revival of Nazism in Ukraine last month—with “the full connivance of Europe and even incitement from the United States.” Conveniently conflating Westernism with the 1940s Nazi invasion, Russia has been escalating not just the conflict in eastern Ukraine, but also its clandestine operations and military exercises abroad.

We should remember, however, that in 1998, Putin—by then a KGB retiree—became a new chairman of the FSB (the KGB’s Russian successor), but didn’t reinstate his formal rank. Thus, he became a civilian-in-charge—the first time since Semichastny’s appointment. Moreover, a presidential contender in 2000, he insisted that NATO was not Russia’s enemy.

Yet just a few years into his presidency, he chose not the road that Khrushchev and Gorbachev had contemplated—of political cooperation, economic prosperity and military cutbacks—but the mindset of most Russian leaders: animosity, militancy and isolation. And this is where our friend Vladimir should tread lightly. There is a precedent for the fantastic failure of overconfident Russian leaders he would be wise to learn from.

Russia, a geographical oxymoron—neither Europe nor Asia, though it stretches from Germany to Japan—has defined itself for centuries as distinctive, self-sufficient, and eternally of the “spirit” that sets it apart from Europe. Protecting this kind of uniqueness, Russians think, requires constant and often aggressive vigilance, which harks back to the Middle Ages when Russia began to emerge as a unified Moscow-centric state.

The historical hero of today’s Kremlin, Putin’s 16th century doppelganger Ivan the Terrible, has been recently rebranded as a caring father of the nation. He is now celebrated for conquering surrounding lands while brutally prosecuting opponents in the name of patriotism and national security. In an overt reference to Putin’s own rule, Ivan is lauded for craftily overcoming threats to Russian sovereignty from the west (Poles and Lithuanians), the east (Mongols), and the south (Crimean Tatars).

What Putin shortsightedly forgets is that dictators’ exits from power are rarely peaceful. The more oppressive the rule, the more dramatic the demise. Fast forward a few centuries, during which even the Westernizers Peter the Great and his granddaughter-in-law Catherine, also the Great, ruled ruthlessly and with suspicion of anyone with alternate views. This, of course, was the way of all monarchs—but while other countries drove toward enlightenment over the years, rejecting (for the most part) outright dictatorship and bellicose rhetoric, and welcoming cooperation, Russia’s state of animosity grew unchecked.

Communist Stalin was weary of outside threats, belligerent against what he considered an imperialist goal to keep Russia down. And while that was partially the case during the Cold War, Putin’s stand against the “menacing” West is overly histrionic. Stalin was more brutal and deadly in his tactics, yet his goal was to better the future for humanity. By contrast, Putin’s “actions with respect to Ukraine … seek[s] to ensure the survival of autocratic rule by restoring militarism and a fortress mentality in Russia,” as Lilia Shevtsova writes for The American Interest.

What Putin shortsightedly forgets is that dictators’ exits from power are rarely peaceful. The more oppressive the rule, the more dramatic the demise.

Ivan the Terrible, who tired his subjects with an increasingly oppressive 50-year governance, instituted policies of political centralization. According to some historical sources, he was eliminated to give way to another czarist dynasty, that of Boris Godunov.

Then there was the 18th-century death of Paul I, the meek son of Catherine. His reign, like Putin’s, began as non-expansionist—even to his mother Paul didn’t seem to be, as the Russians say, “imperial material.” Yet he quickly turned aggressive in order to prove to France and Britain that Russia’s own great-power ambitions couldn’t be overlooked. Paul even planned to take over India in order to curtail Britain’s influence. For this unpredictable foreign policy as well as for his haphazard sacking of courtiers, Paul’s own officers killed him with a gold snuffbox.

Stalin fought against international imperialism, looking for enemies in all corners of society, and employed security services to create foes out of regular folks. By 1953, he became so paranoid in his hunt for adversaries that he had a stroke—though it’s unclear whether this contributed to his death shortly thereafter. There are persistent rumors that his entourage couldn’t wait for him to leave power, and facilitated a speedier demise.

February’s murder of the opposition leader Boris Nemtsov has revealed secret frictions in the bastion of Putinism. Following Stalin’s death, his dreaded secret-police chief, Lavrenty Beria, who operated the Soviet machinery of repression, was executed by the arbitrary system of justice that he helped create. Providing no proof, the Kremlin functionaries, Khrushchev included, accused him of being a Western spy.

Beria’s bloody fall—death by firing squad—should be a warning to Putin. In his 15 years in power, he has strengthened the security forces, intimidated and jailed opponents, and muzzled the media and courts; now his own methods may be turned against him.

February’s murder of the opposition leader Boris Nemtsov has revealed secret frictions in the bastion of Putinism. Moscow was awash with speculation as to who might have done the shooting in stunning proximity to the red-brick walls of the Kremlin.

One theory suggests that it was the handiwork of Putin’s protégé, Chechnya’s autocratic president, Ramzan Kadyrov. Feeling, perhaps, that the current power is weakening, the assassination was Kadyrov’s salvo to any Kremlin occupant: if he doesn’t pay attention to Chechen interests, Moscow will face more discord.

To make matters worse, after Nemtsov’s shocking murder, the Russian leader mysteriously disappeared for 10 days, only furthering rumors that his days were numbered. And although Putin reappeared as suddenly as he vanished, and with a joke no less, the jittery mood and endless theories of his demise have exposed Russia’s readiness for a palace coup.

After all, besides Kadyrov, there are hardliners like Patrushev who have been unhappy with what they see as the president’s lenient response to the West—taking just Crimea is a far cry from marching onwards to “fascist” Kyiv.

Then there are the Sergei Ivanov types. Ivanov, himself a KGB man and a chief of the presidential administration, must be weary of the Western rebukes and Putin’s increasingly irregular behavior. Ivanov is no Gorbachev, but sanctions allegedly don’t sit well with him. Believing in Russia’s might, as he does, is one thing; being unable to travel abroad to show off this might is another.

Putin’s plan to stay in power for yet another six-year presidential term, ending in 2024, will only increase the possibility of rising tensions between these and other combative camps—let alone the inevitability of public discontent, when people do lose their pants as a result of sanctions-driven economic collapse.

Therefore, a word of caution to the president: The non-violent model of Khrushchev and Gorbachev’s ousting might be the one to follow, not to reject.