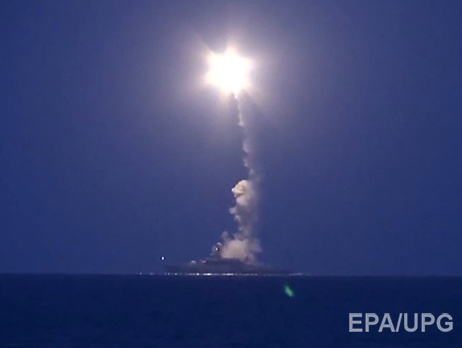 Monitoring by U.S. military and intelligence assets has concluded that at least four missiles crashed as they flew over Iran. One official said there may be casualties, but another official said this is not yet known.

It's unclear where in Iran the missiles landed. The Russian ships have been positioned in the south Caspian Sea, meaning the likely flight path for missiles into Syria would cross over both Iran and Iraq.

The Russians have been firing a relatively new cruise missile called "Kaliber," using it for the first time in combat.

Iran's semi-official FARS news agency, however, said that neither Russian nor Iranian authorities have confirmed the U.S. officials' information at this point.

On Wednesday, Russian Defense Minister Sergey Shoigu told President Vladimir Putin on Russian television that all 26 missiles launched from four missile ships struck their targets, with no civilian facilities hit. Putin then congratulated him on the performance of the weapons.

It was not clear, however, whether Shoigu was referring to the same missiles as the U.S. officials, as the latter may have been describing ones launched after the TV appearance.

The assessment came as Defense Secretary Ashton Carter warned Thursday at NATO headquarters in Brussels that Russia would likely suffer casualties "within the coming days" as it deepens its military involvement in Syria.

Carter also took rhetorical aim at Moscow Thursday, calling out Russia for "increasingly unprofessional behavior" after a Russian fighter jet violated Turkish airspace earlier this week and after Russia launched missiles into Syria from the Caspian Sea "without warning."

While Carter again pointed to the need for an agreement on "professional safety procedures" to avoid accidents in Syrian skies between Russian and U.S.-led sorties, which are taking aim at ISIS, he stressed that the U.S. would not cooperate militarily at a strategic level with Russia.

"We have not and will not agree to cooperate with Russia so long as they continue to pursue this misguided strategy," he said earlier in the week. "It remains our hope that Russia will see that tethering itself to a sinking ship is a losing strategy because Russia has the opportunity to change course and do the right thing. I don't know if they will."

In Rome earlier in his trip, Carter described to a "tragically flawed" Russian strategy in Syria, where Russian military actions appear increasingly aimed at bolstering the Syrian regime of President Bashar al-Assad in his struggle against rebel forces and less at fighting ISIS.

U.S. and Russian military officials have yet to establish a reliable communication channel to avoid potentially tragic accidents between Russian and U.S.-led forces operating in Syrian airspace.

Separately, a U.S. defense official told CNN that there have been at least two incidents in which Russian fighter jets flew in close proximity to U.S. drones. The first incident was not believed to be deliberate. However, the U.S. assessment is that the second encounter was a deliberate attempt to shadow the unmanned aircraft.

Unlike the recent encounters with manned U.S. fighter jets, the drones did not turn away, since no pilots were at risk.