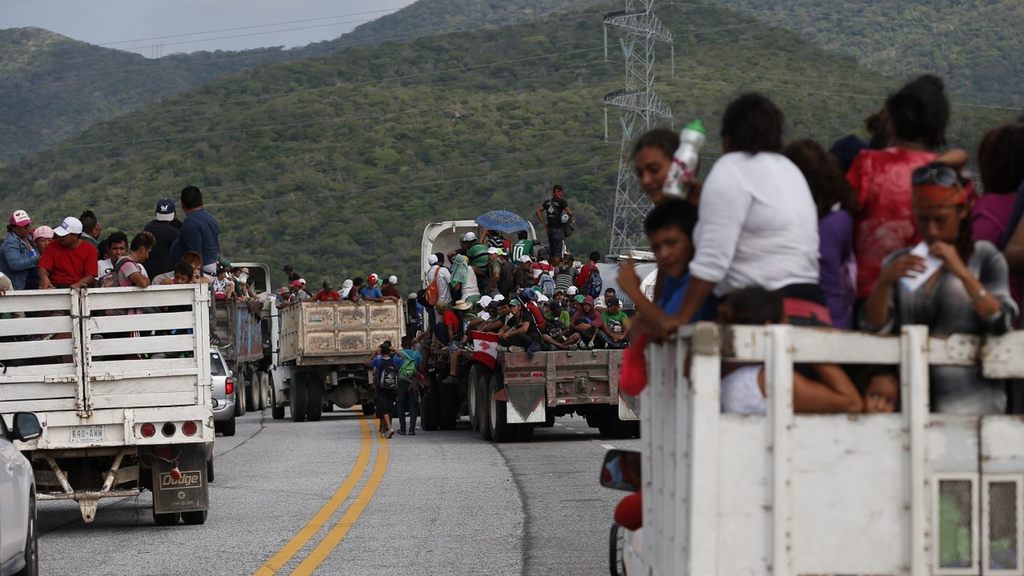 The Department of Homeland Security claimed Thursday people from at least 20 countries make up the two caravan groups, not just citizens of Guatemala and Honduras.

In a release called "Myth vs. Fact: Caravan," the department also states more than 270 people in the caravans are either known gang members or have criminal backgrounds.

DHS did not cite its sources for the information and a department spokesperson said that information is law enforcement sensitive.

"We continue to be concerned about individuals along the caravan route. In fact, over 270 individuals along the caravan route have criminal histories, including known gang membership," the statement said. "Those include a number of violent criminals – examples include aggravated assault with a deadly weapon, armed robbery, sexual assault on a child, and assault on a female."

A DHS spokesperson told the Washington Examiner the 270 had previously been convicted, not just charged.

"We also continue to see individuals from over 20 countries in this flow from countries such as Somalia, India, Haiti, Afghanistan, and Bangladesh. There is a large segment of this population that we know nothing about and we must be prepared to defend our border and enforce our laws to protect the citizens of our country," the department said.

Officials put the number of people in the two caravans from Central American countries at 6,500 total. Both caravans are making their way north through Mexico.

Last week, President Trump stated "unknown Middle Easterners" were among migrants in a caravan fleeing Central America for the U.S. DHS had defended Trump's claim but not shared details of who was in the group until now.

Mexican officials have previously said known criminals were a part of the caravan.

“I have videos from Guatemala that show men dressed in identical clothing, sporting the same haircuts, handing out money to women to persuade them to move to the front of the caravan," Mexican Interior Minister Navarrete Prida said Tuesday during a radio interview. "We know, for a fact, that some members of the caravan threatened [Mexican] Migration Institute personnel and we have images showing many of them preparing Molotov cocktails.”

DHS estimates put half of the group as single adults. A senior Border Patrol official based in San Diego, Calif., recently told the Washington Examiner only 20 to 30 percent of the first caravan were children and families.

Citing the Guatemalan intelligence minister, DHS said the "caravan is employing tactics to push women and children to the front to act as human shields as the caravan pushes against its military forces."

The first of the two caravans could arrive by Nov. 3 and as late as Nov. 12, though it depends on if the members walk or drive.

[Related: Here's how long it takes to walk from Mexico's southern border to the US]

Homeland Security officials said those seeking work or to reunite with family members will not be granted asylum unless they can prove they meet the criteria.

DHS Secretary Kirstjen Nielsen said in May that 4 in 5 asylum seekers at the southwest border have their asylum claims denied.