AP Reads its Own Story on “Kenyan-Born” Obama 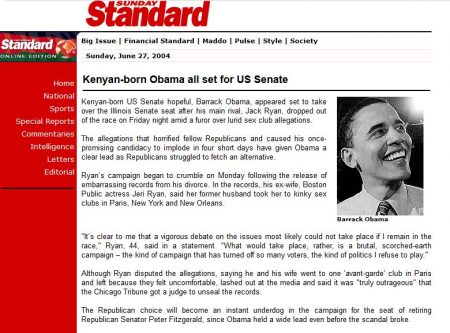 (Sep. 17, 2019) — On Tuesday afternoon, a reader accessing The Post & Email from an “Associated Press” IP opened our article about a 2004 article attributed to the AP describing Barack Hussein Obama II, who was then running for the U.S. Senate from Illinois, as “Kenyan-born.”

As Charlton referenced, the source article, marked “—AP” at the bottom, appeared in Kenya’s Sunday Standard on June 27, 2004 and began, “Kenyan-born US Senate hopeful, Barrack Obama, appeared set to take over the Illinois Senate seat after his main rival, Jack Ryan, dropped out of the race on Friday night…”

The AP was among a number of media sources which reported prior to Obama’s presidential run that Obama was born in Kenya or Indonesia rather than Hawaii, as he now claims.  Another source, Obama’s then-literary agent, in 1991 published a promotional pamphlet which included Obama’s biography and stated that the nascent author was “born in Kenya and raised in Indonesia and Hawaii.”

In April 2007, two months after Obama announced he would seek the U.S. presidency, the biography was altered to say that he was “born in Hawaii.”

On April 27, 2011, an image purported to represent Obama’s “long-form” birth certificate held by the Hawaii Department of Health (HDOH) was posted on the White House website.  Within days, it was analyzed by experts who declared it problematic.  A five-year criminal investigation launched in August that year commissioned by the Maricopa County Sheriff’s Office (MCSO) affirmed those early findings in an initial press conference on March 1, 2012.

At a third and final presser on December 15, 2016, lead investigator Mike Zullo reported that two outside forensic analysts, one from Hawaii and one from Italy, reached the same conclusion that the birth certificate image cannot be considered authentic.

In 2012, he said the investigation revealed that there was probable cause to believe Obama’s long-form birth certificate was a computer-generated forgery and that the selective service card completed by Obama in 1980 was likely a fraud.

AP Reads its Own Story on “Kenyan-Born” Obama added on Tuesday, September 17, 2019

Sharon Rondeau has operated The Post & Email since April 2010, focusing on the Obama birth certificate investigation and other government corruption news.  She has reported prolifically on constitutional violations within Tennessee’s prison and judicial systems.