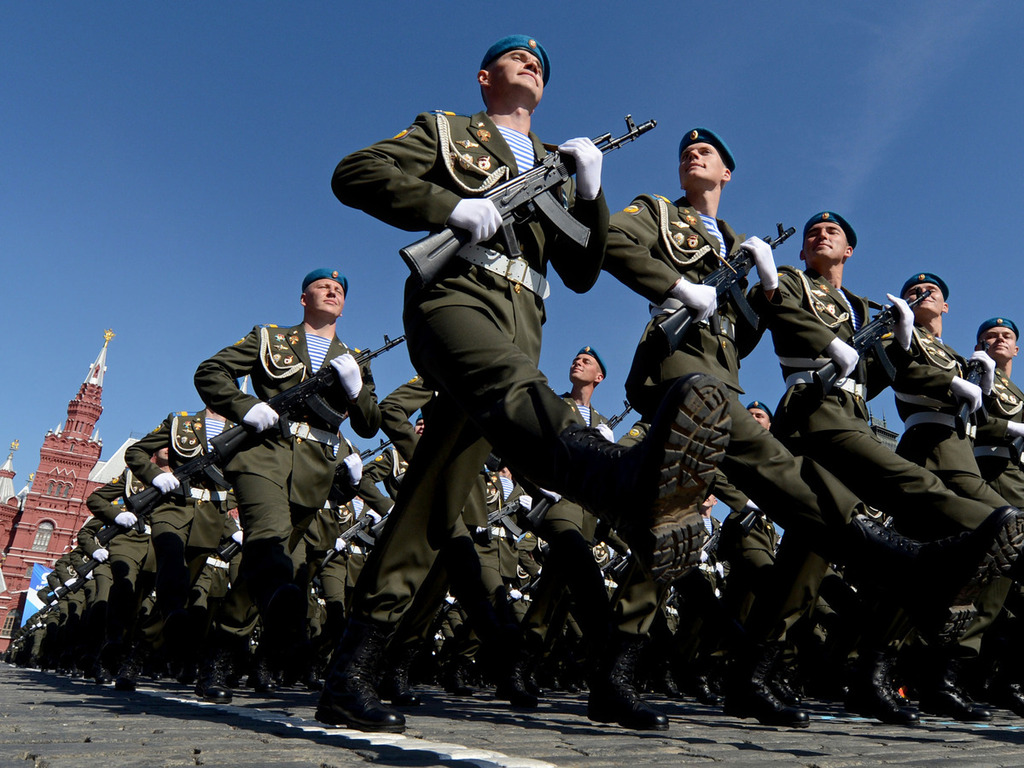 If Vladimir Putin’s ends remain mysterious, so do the means.

Putin is allocating unprecedented amounts of secret funds to accelerate Russia’s largest military buildup since the Cold War, according to data compiled by Bloomberg. The part of the federal budget that is so-called black -- authorized but not itemized -- has doubled since 2010 to 21 percent and now totals 3.2 trillion rubles ($60 billion), the Gaidar Institute, an independent think tank in Moscow, estimates.

Stung by sanctions over Ukraine and oil’s plunge, Putin is turning to defense spending to revive a shrinking economy. The outlays on new tanks, missiles and uniforms highlight the growing militarization that is swelling the deficit and crowding out services such as health care. Thousands of army conscripts will be moved into commercial enterprises for the first time to aid in the rearmament effort.

“The government has two urgent tasks: strengthening security at all levels of society and promoting innovation to end the macroeconomic stagnation,” said Ruslan Pukhov, director of the Center for Analysis of Strategies and Technologies and an adviser to the Defense Ministry in Moscow. “The solution to both problems is to intensify the development of the military-industrial complex.”

Since bringing the country back from the brink of bankruptcy a decade and a half ago, Putin has increased defense spending more than 20-fold in ruble terms. In dollars, it exceeded $84 billion last year, more than any other nation except the U.S. and China, according to the Stockholm International Peace Research Institute.

Defense and the related category of national security and law enforcement now eat up 34 percent of the budget, more than double the ratio in 2010. The U.S., by comparison, spent 18 percent, or $615 billion, of its budget last year on defense and international security, according to the Washington-based Center on Budget and Policy Priorities.

After studying Putin’s actions in Ukraine, including his seizure of Crimea, the National Defense Academy of Latvia, a former Soviet satellite that is now part of NATO and the European Union, concluded that Russia’s ultimate aim is to introduce “a state of permanent war as the natural condition in national life.”

“We can and must do for the defense industry what we did for Sochi,” Putin told generals and executives near the Black Sea resort on May 12, referring to the $50 billion Russia spent to host the 2014 Winter Olympics there. “All questions relating to adequate resource allocation have been resolved.”

That same day, Putin signed documents creating what he called the “industrial battalions” program, which will give thousands of draftees the option of working in defense enterprises instead of joining the regular military.

After years of chronic funding problems for weapons makers, Russia has started to prepay for the goods and services it buys from the more than 1,300 organizations and 2.5 million people that make up the defense industry. About half of this year’s defense budget was dispensed in just the first quarter, though most of what was paid for is classified.

The secret share of Russia’s budget may rise to 25 percent in 2016 as the military buildup continues and “more agencies and activities (such as border protection) are classified as national security,” the International Monetary Fund said in a report last year. Many of Russia’s fellow Group of 20 members cloak less than 1 percent of their spending, the IMF said.

One thing that isn’t being hidden from the public is the number of people in uniform, which is “perhaps the most palpable sign of Russia’s military transformation,” according to Igor Sutyagin, senior research fellow at the Royal United Services Institute in London.

“While uniformed manpower has declined in every Western nation since 2011, the number of Russian personnel increased by 25 percent to 850,000 between 2011 and mid-2014 -- although this was still short of the 1-million manpower target set in 2010,” Sutyagin said in a research note.

Russia also has about 2.5 million active reservists out of a total population of 143 million, according to Global Firepower, which studies the conventional warmaking capabilities of 129 countries. It ranks Russia No. 2, after the U.S. and ahead of China, India and the U.K.

Russia is already the main challenger to the U.S. when it comes to selling arms. It delivered some $16 billion of fighter jets, missiles and other weapons around the world last year, accounting for about 3.2 percent of the country’s exports, according to Pukhov of the Center for Analysis.

The North Atlantic Treaty Organization, created in 1949 to contain the Soviet Union, said it’s not sure what Putin is trying to achieve with either his actions in Ukraine or his weapons program.

“We cannot fully grasp Putin’s intent,” the alliance’s top military commander, U.S. Air Force General Philip Breedlove, told Congress in April, according to the Defense Department’s website. “What we can do is learn from his actions, and what we see suggests growing Russian capabilities, significant military modernization and an ambitious strategic intent.”