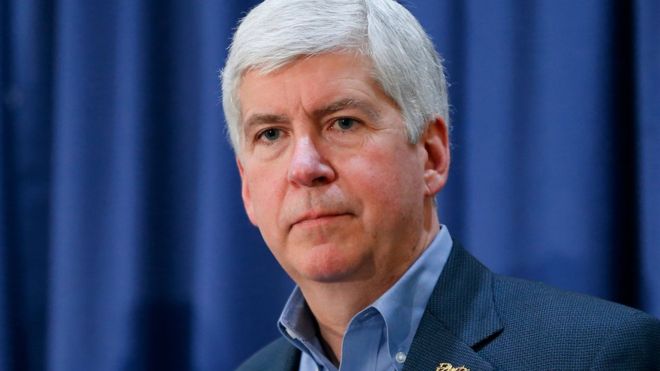 Mr Snyder, a Republican, has rejected claims of inefficiency as thousands of people were left without safe tap water and at risk of lead poisoning.

He has described the crisis as a "massive error of bureaucracy".

Meanwhile, seven families have filed a lawsuit against authorities.

The city's water became contaminated when lead leached from old pipes after a change in supplier in 2014. Some 100,000 people were affected.

Living one bottle of water at a time

The issue came up as the Democratic candidates took part in a televised debate in Flint on Sunday. Both Ms Clinton and Mr Sanders criticised Mr Snyder's response to the crisis and called for him to step down.

The governor took to Twitter to reject the allegations. In a series of messages posted during the debate, he defended his administration's actions, including aid delivery and cleanup efforts.

"I'm taking responsibility as our value system says we should. My track record is getting things done, and I want to get this done," he said.

The switch to a river water source was a money-saving move when the city was under state financial management.

Mr Snyder, however, dismissed allegations that the decision was based on savings, and blamed all levels of government for the crisis.

The water from Flint River stripped lead from the pipes and contaminated the supply. Lead exposure can cause learning disabilities and behavioural problems in children.

Lawyers will ask the courts to certify a class action that would cover any Flint children who were poisoned by drinking the contaminated water, NBC News reported.

Authorities have not commented.