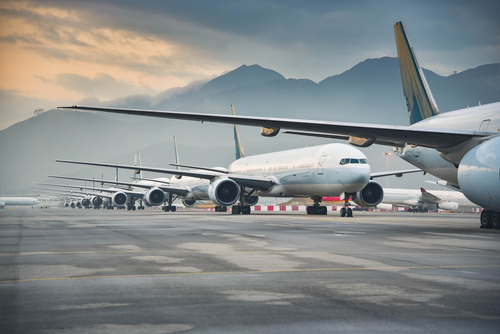 Russia is in its third week of invading Ukraine and it’s not going well for them. They reportedly lost over 12,000 members of their military and a massive amount of equipment.

The country’s Central Bank has been sanctioned. Russians are fighting over even basic products in grocery stores, as NATO and the US sanctions the country into the ground.

Leader Vladimir Putin is one of the richest men in the world, with sources of black market wealth and connections all over the world; so he doesn’t much care about the suffering of ordinary Russians.

Nonetheless, he’s concerned about the impact these sanctions could have on his war effort and power. That’s why, on Monday, he put through a new law and stole $10 billion of foreign aircraft.

What is the New Law?

The new law by Putin is quite clever in a way, but at heart, it’s still just basic theft.

Back when he worked in a high position in the office of the mayor of St. Petersburg in the 1990s, Putin was investigated.

Then, he was convicted for stealing huge shipments of food from Europe to line his own pockets in return for trading away Russian precious metals.

The man is a basic thief and criminal who rose to power by allying with other thieves and criminals. Even those who support Putin in Russia would admit he doesn’t exactly play by the rules.

You don’t become the head of a criminal-run country like Russia by being a nice person.

Putin’s new airplane law is just a more bureaucratic version of the big theft that got him started in the 1990s. In this version, Putin declared Russia’s airlines can seize foreign-owned planes being leased inside Russia.

Officially, this is to keep flights running smoothly despite sanctions. Unofficially, it means he just stole $10 billion of aircraft from foreign companies like Boeing and Airbus inside Russia.

How Many Aircraft Will Be Affected?

At this time, Russian airlines are leasing 780 aircraft.

Of those 780 aircraft, 515 are being leased from foreign countries. Most of them are under the jurisdiction of Ireland and Bermuda, due to tax savings.

Irish and Bermuda authorities said they are cutting off the authorization for those planes and their permission to fly abroad.

This means Russia is now in possession of a huge amount of aircraft it can only fly inside Russia and can’t insure.

If the planes are registered fresh inside Russia, as Putin’s new law provides, then they will technically be able to be flown inside Russia, but this is still all about hitting back against sanctions.

Moscow’s strategy is clear regarding this new law from Putin. It is holding planes hostage in order to get revenge on the West, essentially.

But in the absence of spare parts, the planes will soon begin to fall, and then Putin will face new protests at home.

Watching the collapse of a once significant empire.