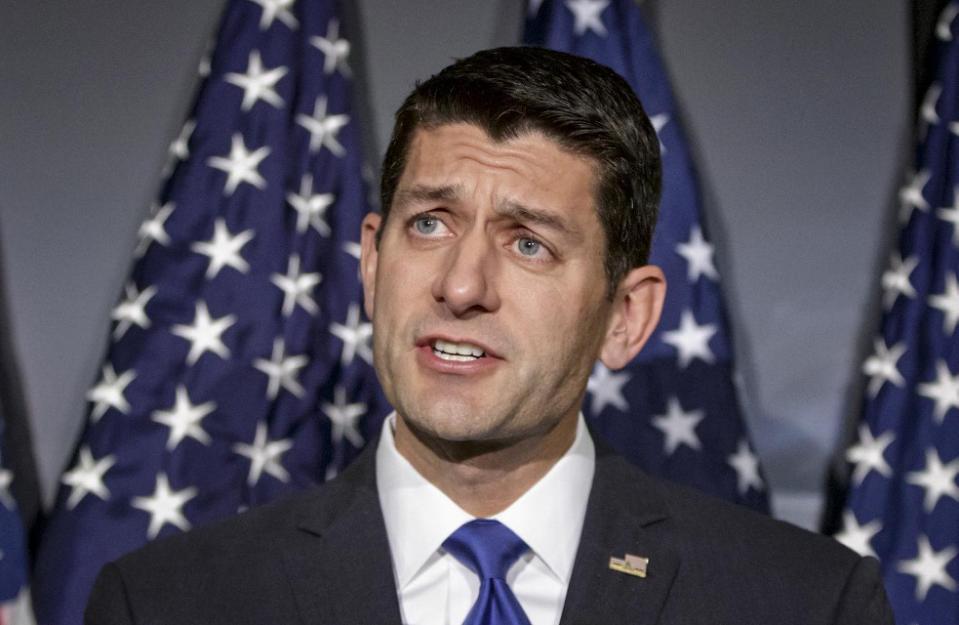 WASHINGTON (AP) — House Speaker Paul Ryan's national stature is such that he had to call a news conference to deny he wants to be president. Back on Capitol Hill, he's about to blow through a statutory deadline to pass an annual budget, a major embarrassment for him and House Republicans.

Under the government's arcane budget law, the House is supposed to produce a budget by this Friday, April 15. But a tea party revolt over Ryan's embrace of last year's bipartisan deal with President Barack Obama to increase spending has left him well short of the votes he needs.

"It would appear that we're not going to have a budget," the No. 2 House Democrat, Steny Hoyer of Maryland, told reporters Tuesday. "They made it a big deal. Hypocrisy is part of it," he added. "They're in deep disarray."

House Republicans met the budget deadline each of the five years they controlled the House under the leadership of John Boehner, who was ousted as speaker last fall under conservative pressure. Ryan himself, his party's 2012 vice presidential nominee, chaired the House Budget Committee for much of that time and guided the "Ryan Budget" that slashed entitlement spending. But he also cut a deal with Senate Democrats and the White House that enhanced his profile as a charismatic, policy-focused conservative.

The Wisconsin Republican has repeatedly lambasted Democrats when they didn't get budgets done while in congressional control, even backing a law that would have cut off the paychecks of lawmakers if they failed to pass a budget.

Ryan's own inability to deliver now that he's speaker raises questions about his stewardship of the House, and whether his repeated promises to return power to rank-and-file lawmakers can produce results, given how unwilling some of them are to compromise. And amid an angry GOP presidential campaign that's exposed deep divisions in the party, Ryan's honeymoon in the House may be coming to an end if he's unable to bridge the same divide between hard-core conservatives and more pragmatic-minded lawmakers that defeated his predecessor.

"There was a lot of excitement last fall when newly elected Speaker Ryan was talking about 2016 being a year of policy and passing a robust policy agenda," said Dan Holler, spokesman at Heritage Action for America. "It's been pretty underwhelming."

Ryan's spokeswoman, AshLee Strong, disputed the suggestion that the budget was dead. "Member discussions continue regarding the best path forward for the budget," she said.

The budget is not the only area where House Republicans are faltering under Ryan's leadership. Very little significant legislation has been moving, and negotiations over a bill to address Puerto Rico's fiscal crisis have proceeded in fits and starts, an area where Boehner's ability to cut deals with Democrats might have come in handy. It's unclear whether a just-released Puerto Rico bill backed by Ryan will attract the needed support.

But Ryan has aimed his sights higher than the nitty-gritty of legislating, putting committees to work on developing policies on issues from health care to national security to poverty that can serve as a "governing agenda" for the GOP. He's pledged to release the proposals ahead of the GOP convention in July, giving his Republicans a program to run on should they want to distance themselves from the eventual GOP nominee.

Ryan is ensuring that they have the campaign cash to get elected. He raised $17.2 million in the first three months of 2016 and transferred more than $11 million to the National Republican Congressional Committee.

Ryan made clear Tuesday that he will not be that nominee, hastily calling a news conference to try to shut down rampant speculation that he could emerge as his party's standard-bearer if front-runner Donald Trump or the other candidates — Texas Sen. Ted Cruz and Ohio Gov. John Kasich — flame out at a contested convention. Party leaders fear both Trump and top challenger Cruz could spell certain defeat in November, costing the GOP not only the White House but control of the Senate too.

"Let me say again, I'm not going to be our party's nominee," Ryan said. "But I'll also be clear about something else: not running does not mean I'm going to disappear," he said. Ryan pledged to unveil "a policy agenda and offer a clear choice to the American people."

On the budget, Boehner confronted a comparable situation in 2014 to where Ryan is now. It was the second year of a budget deal with Obama — negotiated by Ryan — and some conservatives were reluctant to go along with higher agency budget levels. Boehner was working with a smaller GOP majority but had an advantage since conservatives were relatively sheepish after the 2013 government shutdown that they sparked.