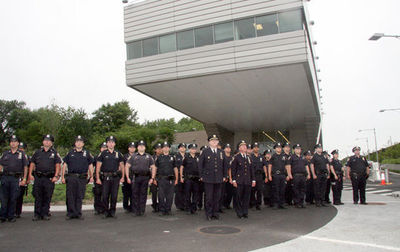 Staten Island’s first new stationhouse in more than 50 years is open for business on the at GRANITEVILLE.

The 121st Precinct and its two-story, stapler-shaped building went active on Monday with 200 personnel, including about 160 police officers, detectives and supervisors, as well as Deputy Inspector Terence Hurson, a Brooklyn native and Richmond resident who previously headed the 94th Precinct, in Brooklyn’s Greenpoint section.

The NYPD’s new digs mean the closure and dismantling of the temporary 122nd Precinct satellite office across from the Staten Island Mall.

The new station is located at , not far from the intersection of . It’s directly across from the ShopRite on . The building is set back from the street and has a circular parking lot for civilians. Police vehicles will be parked behind the building.

The building is being hailed as the city’s first “green” cop shop – it was built to Leadership in Energy and Environmental Design (LEED) Silver standards, and will use 25 percent less energy and 30 percent less water than a comparable building.

(R-Mid-Island) said the best part of the new precinct is that is helps shrink the ground covered by the 120th and 122nd Precincts.

Residents shared their opinions on the new police quarters.