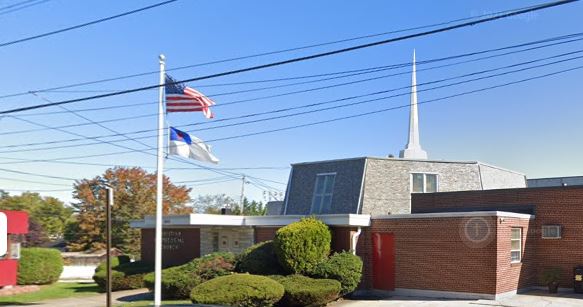 How can you ruin a good cause and turn it into a war, ask Dr. Rev. John Rocco Carlo  Senior Pastor Christian Pentecostal Church located at 900 Richmond Rd Staten Island, NY

Next year will be 100 years since this church has served the people.

"1923 and God has allowed us to grow into a large multi-cultural congregation" - Said at https://www.cpc900.org/about-us

But today, several hundred people who stand for hours in front of the church are not sure that this church is multi-cultural.

Unfortunately, the pandemic has affected our lives. Or maybe we just didn’t notice something in Peacetime, and now it appeared during the tragedy.

Many people who were not previously parishioners of the church came to its doors today to receive food assistance.

Almost from the beginning of the pandemic, the church began to receive food and distribute it to those in need.

Those in need are those who have lost their jobs, the   seniors and the disabled. They lined up in a long line and waited for hours for the doors to the courtyard of the church to be opened for them. This went on for a long time, until the cold began. The kind heart of the pastor took pity on the two Italian-speaking tribesmen. Those in the queue knew these people well - for almost a year they met every week and waited for their turn.

And when the pastor explained to people from the queue that he gave the right to two disabled people not to stand for hours, but to come directly to the courtyard from the side of the parking lot, no one objected.

The problem began when more and more new people began to be added to these two Italians. And gradually the queue in the courtyard grew to 20 people and continues to grow.

And then it became incomprehensible: why these people discriminate against those who stand in the cold for hours, Especially since they did not have any signs of disability: they easily lifted 50 pound sacks of potatoes and loaded them into their cars - this is a different story: the distribution of products in huge packages attracted the owners of small shops and restaurants - mostly Chinese.

Why do they come and stand in line that the Pastor has arranged in the courtyard?

Seeing that the tension was growing, the pastor stopped going out to people and events began to develop spontaneously.

It got to the point that people from the main line tried to stand up as a wall in order to prevent impostors.

But these people went ahead and it came to brawls so much that the police intervened.

But there was no pastor...

It so happened that the queue on the street spoke Russian, Uranian and Chinese.

And people on the street, standing for hours in the cold, began to discuss among themselves that they were discriminated against on a racial basis.

They wanted to talk to the pastor, but the pastor still didn't show up.

Would these people be willing to come into the fold of the church if they were made clear that they were second-class people?

Because the first grade does not stand in lines.

So the pastor decided

Line of people outside the Church: