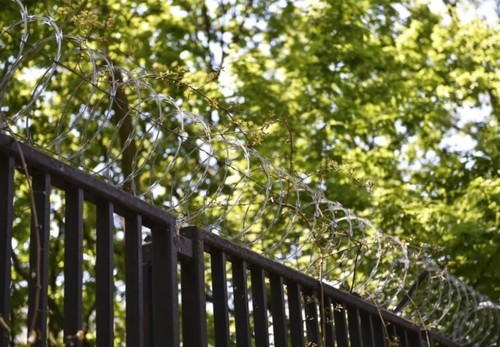 A razor wire addition is seen on the fencing that surrounds the Embassy of Russia at the end of 38th Street NW on May 4, 2015 in Washington, D.C. (Ricky Carioti/The Washington Post)

Beside a tony, tree-lined northwest Washington neighborhood near the National Cathedral, at one of the highest points in the district, sits the massive Russian compound. It’s heavily secured, surrounded by tall iron fencing on all sides.

But at the back of the embassy tucked away off Fulton Street, on the side unseen to people beyond the residents of the neighborhood, the Russians have added another layer of security: razor wire.

Joyce Winslow, who lives a block away, said she believes it’s only gone up in the last several weeks. On an unseasonably warm April day, she’d taken a walk and hadn’t seen it. But over the weekend it was there. The image of the grotesque and dangerous blades in her genteel neighborhood was “shocking,” she said.

We know relations between the United States and Russia are strained, but why now? Threats from pro-Ukrainian activists? Propaganda to show Russians back home? To keep out squirrels? Paranoia?

We went several rounds with the Russian embassy media shop via e-mail, but have yet to receive an answer to our pressing inquires about the razor wire, primarily confirmation that the wire is a new edition to the facade and the rationale for it.

Maybe they’re simply taking a cue from the White House, which will add spikes to its fence to keep out future jumpers.

Of course those are designed to still look appealing. This Russian fence has all the aesthetic appeal of a New Jersey junk car lot.