Why do Vladimir Putin and his Kremlin cronies look so nervous? 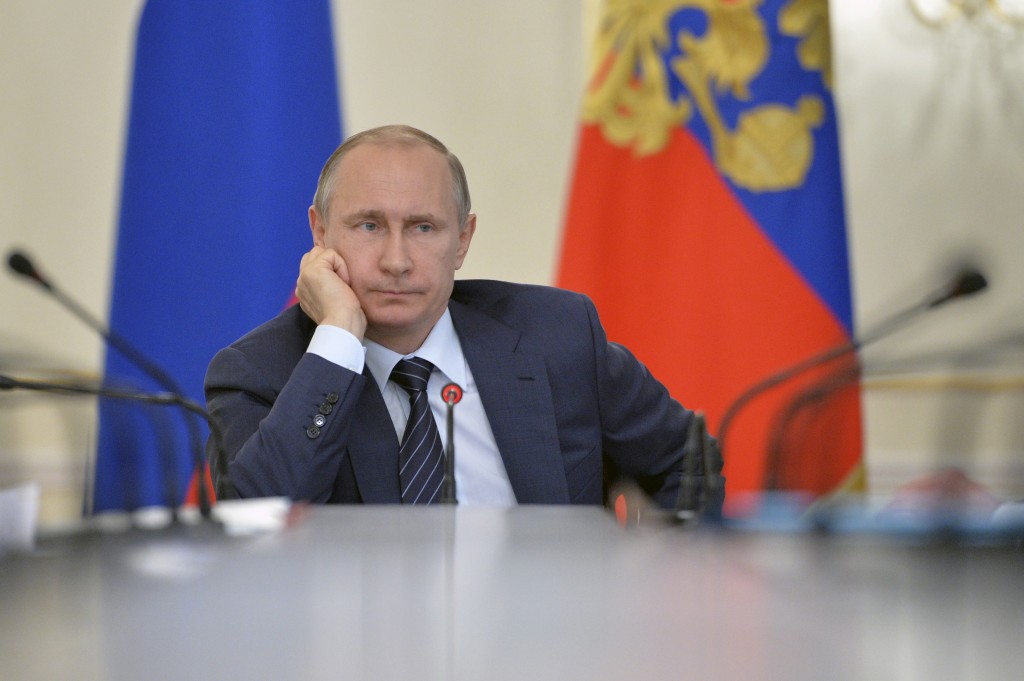 Russia’s three-year electoral cycle has gotten started with a bang.

One of Russian President Vladimir Putin’s closest KGB cronies from his St. Petersburg days and a co-founder of the exclusive Ozero dacha housing cooperative was recently dumped from his cushy post as head of the state railway monopoly. This raised yet more speculation that Putin feels he needs to reshuffle his inner circle. The next day, Putin staged another of his trademark photo ops — piloting a mini-sub off the coast of Crimea. The Kremlin propaganda machine continues in overdrive, celebrating the destruction of banned (and allegedly toxic) foodstuffs smuggled in from the West.

Putin’s resort to theatrics clearly indicates he is gearing up to run for re-election in 2018. The annexation of Crimea and surge in Russian patriotism have pushed his approval rating to levels no Western leader can hope to replicate. The only place they can really go is down. Yet despite having no serious domestic political opponents, Putin’s path to re-election may prove complicated.

At the top of his agenda is how to manage Russia’s elites. The Kremlin has sent a clear message that it needs the elites to help manage the fallout from the current economic crisis — though the threat of public discontent with the regime or significant street protests looks manageable. That helps explain, however, the endless barrage of aggressive anti-Western rhetoric and initiatives, which resonates with a patriotically inclined electorate.

The large Moscow street protests of 2011 and 2012 illustrated the connection between economic growth and demands for greater political participation by the chief beneficiaries of Russia’s then-prosperity. Now, as the collapse in oil prices and Western sanctions undermine the economy, the mood inside Russia could hardly be more different. The creative class in big cities like Moscow is depressed and increasingly disengaged from political life. Some have given up and are just leaving the country. The combination of economic crisis, heavy propaganda, patriotic mobilization and hybrid war inside Ukraine have produced conformism, passivity and insensitivity.

Average Russians, who represent Putin’s political base, likely believe that they are again living in a besieged medieval fortress. Why should they protest against Putin who, according to the official narrative, is defending them against the West’s evil plots to destroy Russia?

It doesn’t hurt that Putin is also responsible for the distribution of social benefits. Far better to wait for handouts, money and food from your leaders — and to keep your eyes peeled for foreign agents and fifth columnists inside Russia.

The average Russian has now absorbed most of the impact of Western sanctions. It’s a far tougher situation, however, for Russian businesses abruptly cut off from the international financial system. Yet Russian companies can also turn to the Kremlin for handouts and subsidies from the state budget. Unluckily for most of them, the size of those handouts depends largely on their connections to the Putin entourage and the price of one commodity — oil.

The political reality is different. Soaring inflation and painful budget cuts contradict what average Russians see on their television sets. For the moment, though, the luridly jingoistic TV programming is an effective substitute for high quality, moderately priced food.

The Kremlin’s political team believes, for the time being at least, that this new social contract — let’s call it, “Crimea and patriotism in exchange for freedom” — works. They believe it will continue to pay off through the end of Putin’s presidential term in 2018.

Then why do Putin and the ruling elite seem so worried and insecure? They probably sense that they are in a vision trap. During the 2000s and 2010s, the ruling elites became complacent — thanks to high oil prices, steady economic growth and an all-too-easy-to-manipulate domestic political system. While the elites initially cheered Moscow’s aggression against Ukraine, they know that the war is costing Russia dearly and that all of the Kremlin’s options to resolve the crisis are unpalatable to Putin and his war cabinet.

So today, the elite is basically at a loss when it comes to strategic thinking.

What exactly will Putin’s 2018 re-election platform be? Will he drape himself in patriotism, the xenophobia of the Russian Orthodox Church and the mythology of the Stalin era? That may not do the trick.

Adding new territories in the Arctic, as the Kremlin apparently hopes to do with its recent claim to the United Nations, would be a pale imitation of the recent triumph in Crimea.

What else is there? An economic rebound seems improbable in the absence of high energy and commodities prices, new sources of growth or the return of the external factors that benefited Russia’s middle class during most of Putin’s time in office. Investment has declined, and this is Russia’s first post-Soviet crisis in which consumption is contracting even faster than investment.

So, even though his poll numbers remain astronomically high, Putin looks increasingly vulnerable. Western sanctions and the end of his on-again, off-again romance with the West have left him isolated internationally.

The Kremlin’s successful campaign to build a besieged fortress has imprisoned its chief architect.