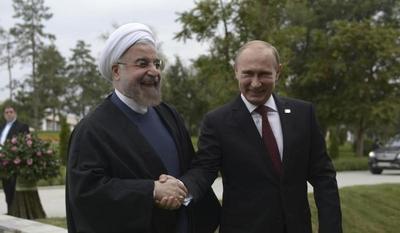 Russian President Vladimir Putin shakes hands with his Iranian counterpart, Hassan Rouhani, at a welcoming ceremony during a summit of Caspian Sea regional leaders in the southern Russian city of Astrakhan on September 29, 2014. Alexei Nikolsky/RIA Novosti/Kremlin/Reuters

Over the past several years, President Vladimir Putin has consolidated power in Russia by marshaling an assertive nationalist ideology, creating an alternative reality through total media dominance and prosecuting a hybrid war in Ukraine.

Yet for a leader who speaks boldly, his preferred mode of action is clandestine—a style shaped by his years in the USSR’s state security service, the KGB.

Secrecy, however, is a problematic mode of behavior for his propaganda-driven regime. And clandestinity is not the best way to burnish an image of a strong, pitiless leader—a tough guy, ready to use force to advance Russia’s influence in the world. Hanging with motorcycle gangs, riding horses bare-chested and taking part in judo exhibitions simply won’t cut it.

To deal with this discrepancy, Putin has developed a highly articulated set of signals used in communicating with Russia’s public and its elites, as well as the international community. This Putin code was on display in several notable ways in Moscow in recent weeks.

On March 25, the Novaya Gazeta newspaper, one of Russia’s few independent news outlets, reported that the president had issued a decree honoring three Russian military units for “heroism in combat.” The three units came from Ussuriysk, north of Vladivostok in Russia’s East; from Ula Ude, in Russian Mongolia; and from the Moscow region.

None of the units honored has officially been acknowledged as having deployed in a combat zone in recent years. The decree was a tacit signal of gratitude for soldiers who likely were deployed in action clandestinely in eastern Ukraine.

Putin sent another powerful coded message to Russians and the world on March 15 when he appeared as the central persona in a behind-the-scenes documentary on Russian state TV Channel 1, titled “The Road Home.” The film tells the true story of the occupation and annexation of Crimea in February and March 2014.

In the documentary, Putin makes clear that he decided to wrench Crimea from Ukraine without any consultation with Crimean leaders and minus any discussion with Russia’s legislators. It makes a mockery of Putin’s claim that the citizens of Crimea were driven to seek unification with Russia because they feared a “nationalist” Ukrainian government that gained power after the toppling of President Viktor Yanukovych.

And it should be remembered that Putin initially had vehemently denied that his armed forces were involved at all in the military operations that accompanied the Russian takeover.

Though Putin initially distanced himself from the assassination of opposition leader Boris Nemtsov, his later public signals hinted at a far different reality. On March 9, a day after a group of Chechens were arrested for killing Nemtsov, and after Chechnya’s ruthless leader Ramzan Kadyrov praised the self-confessed killer Zaur Dadaev as a “Russian patriot,” Putin honored Kadyrov with the “Order of Honor,” a high state award.

On March 10, Russian media sent a further signal indicating what had really happened in the Nemtsov case. It was revealed that Dadaev had resigned his commission as a Russian Internal Ministry soldier a day after he and his colleagues put four bullets into Nemtsov. In other words, Netmsov’s killer was on the Russian government payroll as he planned and executed his murder.

The tactic of people resigning their military commissions to engage in clandestine acts—officially denied by the Kremlin—is the way Russian soldiers, including Chechen fighters, are dispatched to the front in eastern Ukraine. Russian experts suggest that such documents are pro forma and are held in the event fighters are captured by Ukrainian forces, to maintain the illusion of Russian noninvolvement in the conflict.

In December, Kadyrov, the highly honored Kremlin satrap of Chechnya, hosted a rally of 15,000 of his special forces in the city of Grozny, where he declared personal fealty to Putin. Kadyrov indicated the willingness of his fighters to perform tasks that “can only be solved by volunteers” and cannot be handled officially by the regular army and security services. “[C]onsider us a volunteer special detachment of the supreme commander, ready to defend Russia,” he declared.

The Kadyrovtsy (Kadyrov’s men), as they are known, are proving their loyalty as something akin to Putin’s Praetorian guard by fighting in Ukraine in large numbers. Now one from their rank has eliminated Putin’s most prominent critic.

A second March 9 presidential honor sent another signal, this time to the international community. A “Service to the Motherland” award was conferred on Andrey Lugovoy, a former Russian intelligence operative wanted in Britain for involvement in the plutonium poisoning of Aleksandr Litvinenko.

A former security service officer who investigated and documented Kremlin complicity in an alleged “terrorist” bombing, Litvinenko was murdered in 2006 in London. While the Kremlin has denied complicity, it has also prevented Lugovoy from facing the British justice system, despite significant evidence of radioactive contamination in a hotel room he occupied before the assassination. Now the award signals the esteem in which the agent is held.

All these are object lessons in Putin’s modus operandi. Their real message is this: I am working secretly with my security services to advance Russian power. Sometimes I will need to dissemble in order to achieve advance Russian aims. In the end, all will be revealed if you carefully listen to what I tell you.

This is not a case of doublespeak. It is something entirely new. It is a case of partial-speak: conveying crucial information over the course of time in a way that at first dissimulates or makes dark hints, but later makes clear to the initiated the full intent of Putin’s actions.

This partial-speak, this intimation of a Russian hand (tempered by half-hearted denial), is dictated both by the needs of Putin’s internal propaganda machine and his need to string along Western leaders. It is also a sign of Putin’s aversion to risk and of his fear of setbacks or defeat.

By merely hinting at involvement until an operation is successfully completed, Putin not only leaves the door open to retreat but also allows him to sidestep blame in the event of failure. Moreover, it gives him options to retreat in the face of difficulty.

For a multiplicity of reasons, the Putin code will be with us as long as he is in power. It is time for us to master its meaning and be attentive to its dark message.

Adrian Karatnycky is a senior fellow with the Atlantic Council and co-director of its Ukraine in Europe initiative.