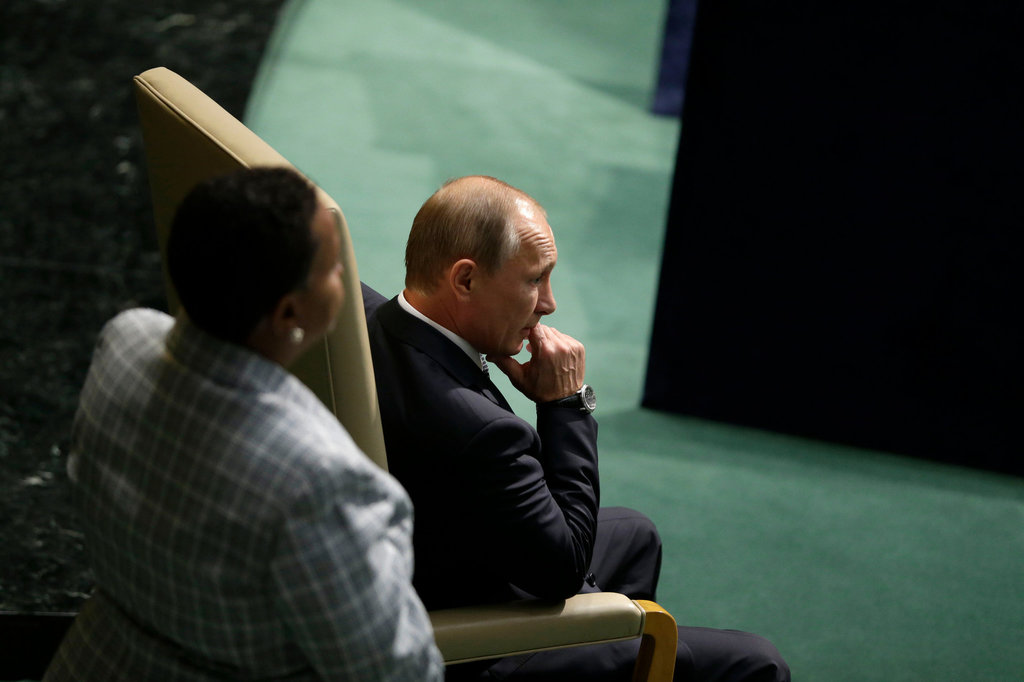 Vladimir V. Putin came to the United Nations General Assembly on Monday to demand that Russia be taken seriously and treated as an equal partner by the world’s great powers. In preparation for his visit, Russia in recent weeks has expanded its military presence in Syria, kept quiet in Ukraine, and even stepped back from its domestic antigay campaign — all in the hopes of reclaiming its place at the table.

The Kremlin ultimately succeeded in convincing President Obama to meet with Mr. Putin. But more than anything else, the Russian president succeeded in New York in laying out his worldview for all to hear. He did so earnestly, rarely raising his eyes from his prepared text. After speaking for over 20 minutes, he sat down, his legs uncharacteristically close together. As he waited for the customary round of handshakes to commence, he bit his lip and fidgeted with his watch.

The biggest and most dangerous enemy in Mr. Putin’s world is the United States. So sinister is this enemy that its name cannot be uttered: His speech criticized U.S. behavior without naming the country, referring to the Americans as “those who created the situation” in Syria, and as outsiders who provoked an armed coup in Ukraine.

According to Mr. Putin’s reading of history — in which Russia was instrumental in creating a participatory world order that the United States subsequently flouted — these descriptions make sense. He claimed that the United Nations was founded at the 1945 Yalta Conference, a momentous event that occurred “in our country,” on the Crimean Peninsula. This is a highly selective version of events: the United Nations actually traces its founding to an agreement signed by representatives of 14 governments on June 12, 1941, when the Soviet Union was still an ally of Nazi Germany. In any event, the United Nations does not recognize Russia’s 2014 annexation of Crimea, so Mr. Putin’s reference to “our country” was off base — unless he meant to position himself as a representative of the Soviet Union.

Continuing in this vein, the Russian president criticized the lopsided geopolitics that emerged with the end of the Cold War, when a certain country came to think itself all-powerful. Without naming names, Mr. Putin pointed a finger at “those who wound up at the top,” who thought that because they were “strong and exceptional” they “knew better” than anyone else and could ignore the U.N., which just “gets in the way.”

In his view, America’s sense of exceptionalism, and its resulting export of “so-called democratic” revolutions that cause chaos and violence, threatens the U.N.-protected world order. True, the Soviet Union made similar mistakes, Mr. Putin noted — but the (still unnamed) United States should have learned from the Soviet past. Sadly, he concludes, it has not.

Here Mr. Putin drew a rare distinction between contemporary Russia and the Soviet Union. Though Russia has bitten off territory from two of its neighbors — Ukraine and Georgia — and actively supported radical opposition in several European countries, Russia does not view itself as expansionist, according to Mr. Putin. Its ideology is grounded in the idea of a clash of civilizations — one of “traditional values” vs. the West — and Russia merely strives to protect the former.

In his interpretation, the United States is the expansionist power. “First they pursued the policy of expanding NATO,” Mr. Putin said, now referring to the enemy as “our colleagues.” He said it was this “logic of confrontation” that produced “a major geopolitical crisis” in Ukraine, where “the fact that a large part of the population was unhappy with the current administration” was exploited to incite an armed struggle. Ultimately, he said, that crisis — which he termed a “civil war” — was the result of a coup “orchestrated from outside.”

As Mr. Putin sees it, that’s what happened in Syria as well: America sided with the protesters who took to the streets in 2011, and this inevitably led to chaos. “I almost want to ask those who started it, ‘Now do you understand what you’ve done?”’ said Mr. Putin. “But I’m afraid this question will go unanswered because they are sticking with a politics based on overconfidence, exceptionalism and the certainty of impunity.”

The way to deal with Syria and the refugee crisis, he said, is to support “the legitimate government of Syria,” by which he meant the Assad regime. Here again he was articulating his own position in the approaching negotiations with Mr. Obama. Mr. Putin firmly believes that the United States was behind both the 2011 Syrian uprising and the months of protests that erupted in Ukraine in late 2013, and that this has led to catastrophe. He also believes that America backed those who protested in Moscow and elsewhere in Russia in the winter of 2011, and that only his own firm hand has averted a similar fate in his country.

In the end, Mr. Putin proposed creating an international antiterrorist coalition that could, “like the anti-Hitler coalition, bring together a broad range” of forces — including the Syrian government — to fight the Islamic State. This return to the World War II theme served not only to remind the General Assembly of the U.N.’s origins, but underlined the fact that, historically, the fight against a greater evil has compelled nations to set aside their differences. In his scenario, the fight against ISIS is a good reason to stop talking about Ukraine.

Before joining the anti-Hitler coalition in 1941, the Soviet Union had annexed parts of Finland and Poland, and all of Latvia, Lithuania and Estonia. At Yalta, the world’s leaders agreed to let Stalin keep all that and exercise his dominance over Eastern Europe. For its part in defeating Hitler, the Soviet Union’s reward was becoming a superpower. Mr. Putin is determined to have Russia again acknowledged as a superpower, at least equal to America in deciding the fate of a country like Syria. In the name of fighting ISIS, Russia wants the West to let it continue carving up Ukraine and flex its muscles over much of Eurasia. In Mr. Putin’s speech, and in his mind, this would be not only logical but plainly right.