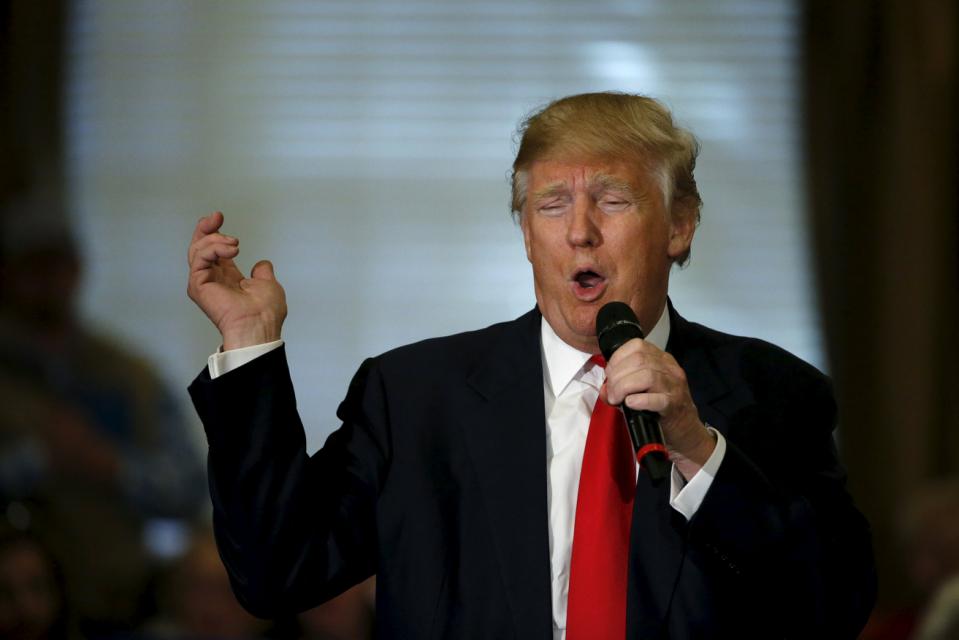 Can the 2016 election get any more rambunctious? To the delight of journalists—and the chagrin of Serious People everywhere—the answer is yes.

Republican bomb-thrower Donald Trump has upped the ante on his insult-everybody campaign by calling for a boycott of Apple (AAPL). That’s right, the world’s most valuable company, and a beloved one, besides. Trump—fresh off a spat with the Pope—apparently feels he can poke anybody or anything at this point, and emerge victorious.

The underlying issue is a serious one. Apple is embroiled in a dispute with the Justice Department over an encrypted iPhone belonging to one of the shooters in the San Bernardino massacre of Dec. 2. The FBI is demanding that Apple develop technology to unlock the phone, so they can investigate information the shooter may have stored there. Apple CEO Tim Cook says that’s no easy task and doing so would set a precedent allowing hackers and crooks easier access to iPhones worldwide. Apple is contesting the FBI order in court, with an appeal set for Feb. 26. But further appeals could keep the matter in court for months.

Trump, with his genius for publicity, is playing the law-and-order card, in calling for Apple to do what the FBI wants. “Boycott Apple until such time as they give that information,” Trump said recently at a rally in South Carolina. “Apple should give up.” Trump, of course, also took to Twitter to affirm his position:

I use both iPhone & Samsung. If Apple doesn’t give info to authorities on the terrorists I’ll only be using Samsung until they give info.— Donald J. Trump (@realDonaldTrump) February 19, 2016 Boycott all Apple products until such time as Apple gives cellphone info to authorities regarding radical Islamic terrorist couple from Cal— Donald J. Trump (@realDonaldTrump) February 19, 2016

Now, this is fascinating. Rarely does one famous brand confront another so pugnaciously, so we get to see how both of them shadowbox in the limelight. In Apple’s corner: The world’s most revered tech company, according to the latest annual rankings by Harris, with a “reputational” score of excellent. In Trump’s corner: a 38% favorable rating and the lead, for now, in the race for the Republican presidential nomination.

Those circumstances seem to favor Apple in a toe-to-toe matchup with Trump, especially since a boycott of Apple is sort of an absurd premise. There are something like 1 billion devices in consumer pockets running on Apple’s iOS software, and most people can’t live without their phone or tablet for more than a few moments. Besides, Cook says he’s sticking up for consumers by stiff-arming the feds (though not everybody believes that).

But public opinion seems split on the issue of whether Apple should comply with the FBI, especially since nobody really cares about the privacy of a terrorist sympathetic to ISIS who murdered 14 civilians at an office party. The FBI also seems to be banking that public opinion will swing around to its view; it bypassed many other chances to challenge Apple on encryption on phones used by alleged criminals, apparently waiting for an ideal case. The stars may have aligned, making the San Bernardino case the strongest the FBI could have hoped for.

Trump has called for boycotts before. He tried to gin up a Macy’s (M) boycott after the retailer dropped his product line last year. And he tried to round up conservatives last year to boycott Starbucks (SBUX) when the coffee chain wasn’t sufficiently reverent toward the religious origins of Christmas. Both efforts fizzled.

His criticism of Apple may land harder, because it’s a much bigger issue. Here’s my prediction: Apple is going to cave, and find a way to unlock the San Bernardino phone so the FBI can have a look. Not because Trump said they should, but because public opinion is going to shift in favor of the FBI as the case gains more notoriety and more people realize what’s at stake. The company will also decide a long series of legal appeals are more trouble than they’re worth, especially if there’s a chance of losing in the end. Apple, after all, is a consumer products company, and it has edged away from hard-line policies before when consumers have edged it along. That’s one reason it tightened up the security of its phones in the first place.

Trump will undoubtedly claim credit if Apple accedes to the FBI. He won’t deserve it. But we should acknowledge his deft ability to sense where public opinion is heading before it actually gets there. Apple should, too.