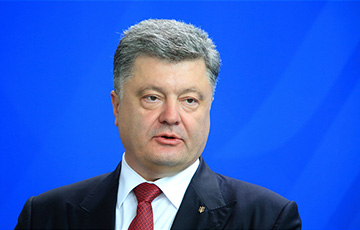 Ukrainian President Petro Poroshenko urged top-level talks over a $3 billion Russian loan to his country, labeling the cash a “bribe” sealed by his ousted predecessor.

Poroshenko said the money was provided to keep Ukraine in Russia’s orbit and out of a European Union trade pact, though he stopped short of saying his government won’t repay it. He blamed Vladimir Putin for destabilizing Ukraine, saying the Russian leader lives in “a different universe.”

“That was a bribe,” Poroshenko said Monday in an interview with Bloomberg Television in his office in Kiev. Even so, “Ukraine will demonstrate responsible behavior. This is the responsibility of the Finance Ministry and the government.”

Poroshenko, elected in 2014 after protests toppled pro-Russian leader Viktor Yanukovych, is juggling a shrinking economy, the world’s second-worst-performing currency and a tense truce in Ukraine’s eastern insurgency. Russia has declined to join its neighbor’s talks to restructure $15 billion of debt, saying it wants the Eurobond repaid on time at year-end.

“Putin never raised the question of the $3 billion,” Poroshenko said. He called the cash “a commercial Eurobond,” though said its status is still under discussion. Russia should be treated the same as other creditors he said.

Ukrainian debt fell after the International Monetary Fund backed Ukraine’s rejection of a creditor proposal to avoid write-downs. Government bonds due 2017 declined 0.40 cent to 47.45 cents on the dollar after sliding 4.4 cents last week.

The hryvnia, which has plunged 27 percent to the dollar in 2015, better only than Belarus’s ruble, weakened 3 percent.

As debt talks continue before a June deadline, Poroshenko said February’s German- and Russian-brokered truce hasn’t stamped out violence. Not a day goes by without rebel shelling, while Ukraine only returns fire, he said.

The more-than-yearlong conflict has driven a wedge between Russia and its former Cold War foes, stoking military tension across the region. Russia denies accusations from Ukraine and its allies in the U.S. and Europe that it’s fueling the unrest.

European security has been shaken since Putin annexed the Black Sea peninsula of Crimea, according to Poroshenko. No one is gaining from the conflict, he said.

There’s “no winner,” he said. “Russia understands that it’s impossible to win this war because of Ukraine’s very strong spirit, because the Ukrainian nation is united as never before, because of global solidarity with Ukraine.”