Speech to the American Chamber of Commerce in Russia Ambassador John F. Tefft 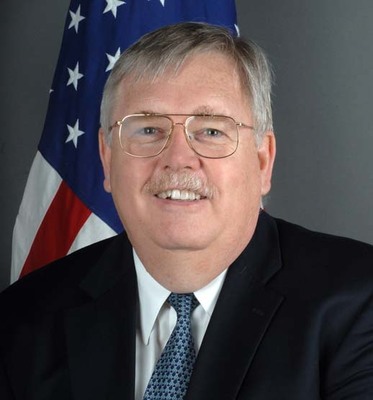 I am grateful for this opportunity to speak to members of the American Chamber of Commerce in Russia.

I am sure you already know them and work closely with them, but let me start by introducing my team.  First, there is Deputy Chief of Mission Lynne Tracy who has been here for six months already.  You also know the head of our Economic Section, Douglas Kramer, the head of our Commercial Section, Keith Kirkham, and the head of our Agricultural Section, Holly Higgins, all of whom work closely with the AmCham and its members.  Our Consul General, Julie Kavanagh, is also here in case you have any questions on those issues.

When I arrived here as Ambassador, one of my first meetings was with the AmCham Board of Directors.  That is because I feel strongly, and I say this personally, that the AmCham and U.S. economic activities in Russia are very important.  I am really proud that American companies in Russia are proven leaders in good corporate governance, business ethics, environmental practices, worker safety, and community involvement.  I want to encourage you to continue upholding these high standards.  You are helping to improve the overall business climate and acquainting Russians with international business values.  I also regard the welfare of U.S. citizens in Russia as one of my highest priorities.  This is another reason why our Consul General is here today. You and your teams matter to me personally.

When President Obama nominated me to be ambassador, he asked me to open channels of communication in Russia to ensure that Russians are made aware of the U.S. Government’s perspective and – just as importantly – to keep our government in Washington informed of the Russian perspective.  As many of you already know from previous conversations I have had with you, I might not always have good news but I will always be straight forward and share our position.  I am also interested in hearing your viewpoints and, when appropriate, will add the Embassy’s voice to advocate on issues that the AmCham cares about.

We agree with the statement Prime Minister Medvedev made at the Gaidar Forum last week that Russia has traveled an enormous journey from a half-ruined post-Soviet economy and it would be a mistake to return to the past by abandoning Russia’s role as an active player in the global economy.  As President Obama said at the G20 summit in Brisbane, our long-term interest is in “a Russia that is fully integrated with the global economy, that is thriving on behalf of its people, [and] can once again engage with us in cooperative efforts around global challenges.  But we’re also very firm on the need to uphold core international principles.”

Unfortunately, Russia violated those principles last year.  The occupation of Crimea and efforts to destabilize eastern Ukraine have halted some areas of potential cooperation and made other areas of ongoing cooperation more difficult.  In light of our interests and responsibilities, we continue to work with Russia where we can to tackle global challenges; however, we cannot turn a blind eye to the events in Ukraine.  As you know, the United States, Europe, and other countries have imposed targeted economic sanctions as the most appropriate response.

We initially focused on certain senior officials and other figures who were leaders in Russia’s illegal actions in Ukraine.  In July and September, as the situation on the ground in Ukraine failed to show significant improvement, we and our allies expanded sanctions to affect key economic sectors such as finance and future energy production.  In December, we prohibited many American and European economic activities in Crimea.  The goal of these sanctions was to demonstrate that Russian aggression in Ukraine would entail a cost in terms of Russia’s broader interests.  We have been clear that the sole purpose of sanctions is to restore Ukraine’s sovereignty and territorial integrity.

As former Finance Minister Alexei Kudrin has noted, the economic slowdown in Russia started well before Russia’s occupation of Crimea.  But the consequences of Russia’s actions in Ukraine have led to greater uncertainty and greater obstacles which have intensified the Russian economy’s downward trajectory.  Even the Russian government now expects a recession this year.  The self-inflicted counter-sanctions which Russia announced in August on imported food resulted in increased inflation and a more direct impact on the Russian people than anything caused by Western sanctions.  This is not to say that the food ban did not impact some of your activities.

Although no one predicted the steep decline in the price of oil to levels not seen since the 2008 Global Financial Crisis, the extent of the impact on Russia lies in the Russian authorities’ failure to take concerted efforts to address well-known structural deficiencies to improve its investment and business climate.  I know the dramatic drop in the value of the ruble inevitably affected your supply chain and bottom lines.  And the sharp increase in interest rates and continued decrease in credit will further suppress investment and growth.  As many analysts have noted, a more open, more diverse economy, in which private interests were empowered to make commercially sound decisions protected by the legal system, would have been much better equipped to confront these fallouts.

Sberbank Chairman German Gref said at last week’s Gaidar Forum that the Russian investment climate is horrible.  I do not think my Russian counterparts are insincere when they say they want investment by Russians and by foreigner investors.  However, the government appears to be unwilling to allow space for business and that undermines that goal.  I share your concerns about recent steps the Russian government has taken that harm the business and investment climate.  Many of you have expressed these concerns to me, and your representatives in the United States have also informed officials in Washington.  One example is the vague “data on-shoring” law, which could make compliance difficult and expensive for U.S., foreign, and Russian firms to implement in the timeframe permitted.  Another example is the decision to once again allow police and prosecutors to file tax cases, even when the tax administration has not found a violation.  As a result, through both its actions in some areas and inaction in others, Russia now faces economic challenges largely of its own making.

What are the prospects for 2015?  When I traveled to the United States for the holidays, I met with family and friends as well as senior officials from the Executive Branch, Congress, and other entities.  It is clear that taking a principled stand on sanctions requires calibrating national security and commercial interests.  Officials in Washington understand the need for this balance.  I believe that Washington has heard the message from American businesses about the importance of protecting the competitiveness of U.S. firms in Russia.  The United States, the EU, and others work together not only because we share values but because the business communities on both sides of the Atlantic want coordinated action.

We expect firms to comply with the sanctions which are in place.  We also support trade endeavors by U.S. firms and their investments in Russia. Within this changed landscape, we want to continue to work with you, to understand your needs, and to advocate for an improved business climate in Russia whenever we can.

Nevertheless, I have to say to you that there continues to be strong bipartisan consensus in Washington that we must respond resolutely to Russia’s illegal and destabilizing actions in Ukraine, even if that stance is costly to some of our other interests. We are not seeking to change Russia’s government but to change its policies.  We are working hard with our allies to allow Russia the opportunity to change its policies, to respect the sovereignty of its neighbors, and to once again become a full partner in securing peace and prosperity – not only in Europe but around the world.  Unfortunately, there is continued bipartisan skepticism that the Russian government is ready to resume such a course.

We understand that there are some things we can do to assist.  The U.S. Government continues to actively encourage Russians to visit the United States, whether for tourism, study abroad, business, or other legitimate reasons.  We want Russians to see America for themselves.  The vast majority of visa applications in Russia are approved, and most applicants receive three-year multiple entry visas.  We also continue to advocate on behalf of U.S. firms for market access and fair treatment in Russia.  We rely on the information you provide to us, whether it is for reports on specific trade issues or for advocacy on a specific issue.

I cannot predict what will happen next, mainly because those decisions lie out of my control and many will be made by senior officials in the Kremlin.  We will continue working closely with the EU on a coordinated approach toward sanctions.  Our main goal for 2015 is for Russia to implement the commitments it already agreed to in the Minsk Protocol.  This includes stopping the fighting, removing all weapons and fighters from Ukraine, releasing all hostages, and returning control of Ukraine’s international border to Kyiv.

We condemn the continued increase of separatist violence, including the recent shelling of a passenger bus waiting at a checkpoint and the renewed attacks on Donetsk airport, and separatist attempts to encroach on territory past the agreed ceasefire line under the terms of the Minsk agreements.  Russian progress on fulfilling its Minsk commitments is the key to rolling back sanctions.

In conclusion, let me reiterate, and I want to say this as clearly as I can:  The United States would prefer to collaborate with Russia to address the challenges of this world.  For example, we worked long and hard to bring Russia into the World Trade Organization because we believed then – and we still believe– that an economically successful Russia is better for the world, as well as for its citizens.  However, we can only collaborate in a manner which upholds core international principles – principles which Russia already has agreed to uphold.

Thank you once again for inviting me here today. I look forward to keeping in touch with you, and I am open to any questions you might have.