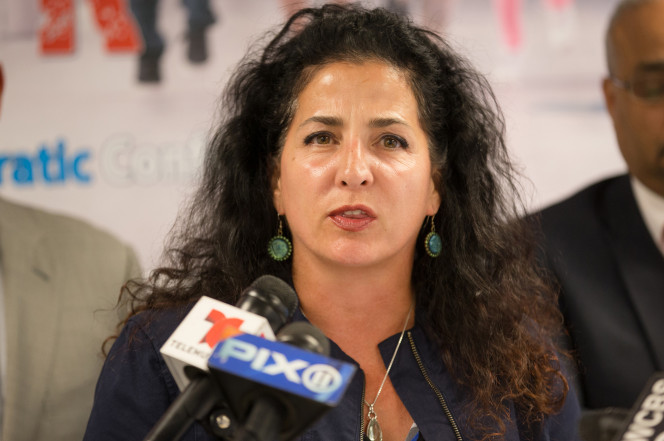 A Democratic state lawmaker praised Moscow — and took a swipe at the Big Apple — in remarks published by a Russian Web site that the FBI believes is a front for the Kremlin.

Shortly after arriving in the cradle of communism with a contingent of Albany pols, state Sen. Diane Savino marveled at the city’s efficiency, according to Sputnik News.

“We were really quite surprised to see how well the city of Moscow is run,” Savino said. “So we are hoping that we can learn some stuff and bring it back to NYC and maybe implement some of really smart stuff that they have done here in the past few years.”

Savino, who represents parts of Staten Island and Brooklyn, also suggested Moscow’s leaders had an edge over their fiscally inept counterparts in New York when it came to spurring development, according to Sputnik News.

“The challenges that the city here is facing are similar to what New York City is facing, but they [Moscow] are able to do it in a way we can’t right now. And it is largely because they don’t have this debt that we carry,” she said.

Savino didn’t return a message seeking comment, but her chief of staff acknowledged she had made the comments.

In an ironic twist, Savino’s colleagues in the state Legislature couldn’t read her remarks, because the Capitol building’s computer servers block access to the controversial Sputnik Web site.

Savino, a member of the turncoat Democratic delegation that shares power with the Senate’s Republicans, is touring Russia on a trip arranged by Anton Konev, a Russian native who is chief of staff to Democratic Bronx Assemblyman Luis Sepulveda.

The legislators have said they were personally paying $2,000 each for airfare and lodging during the eight-day excursion.

News reports earlier this week also revealed the feds are investigating whether Sputnik and Russia’s English-language cable TV station, RT, should be required to register in the US as foreign agents on grounds that they’re spreading Kremlin propaganda.

As part of the probe, the FBI Justice Department questioned former Sputnik White House correspondent Andrew Feinberg, who told Yahoo! News: “They wanted to know where did my orders come from and if I ever got any direction from Moscow.”

A spokeswoman claimed Savino didn’t speak directly to Sputnik, but that the Web site cribbed her comments from a Russian-language report without attribution.

Savino’s chief of staff, Robert Cataldo, also said she had answered a question “which was specific to Moscow’s experiments with congestion pricing and bringing an 800 year old city into the modern age.” Sputnik didn’t return a request for comment.