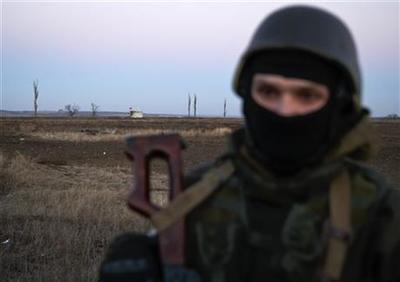 The man — almost certainly a Russian military officer — became alarmed when he saw two journalists approach. His entourage shielded him from all sides, warning that photos were forbidden, and the group soon sped off in a four-car motorcade, with the "general" safely inside a black Toyota SUV with no license plates.

Nearly a year into the conflict in Ukraine, the extent of Moscow's direct involvement has become clear: They may wear camouflage, but the Russians' presence in eastern Ukraine is hardly invisible.

At the same time, there has been a recent shift in tactics that appears aimed at minimizing Russia's military presence as part of an effort to persuade the West to lift its punishing economic sanctions.

Visits by The Associated Press to training grounds like those near Yenakiyeve and interviews with dozens of rebels reveal that Russian armed forces spearheaded some of the major separatist offensives, then withdrew quickly before they could be widely noticed.

More recently, as a shaky cease-fire has taken hold, Russia has kept fewer troops in Ukraine but has increased its training of rebels to make sure they are capable of operating sophisticated Russian weaponry and defending the territory they control. NATO and an independent London-based Russian scholar estimate that Russia has several hundred military trainers in eastern Ukraine.

Since hostilities began around mid-April of last year, the Ukrainian government and the West have accused Moscow of waging an undeclared war in Ukraine by sending thousands of Russian troops to fight on the side of the separatists and providing the weapons to drive back the Ukrainian military. At least 6,000 people have been killed on both sides.

While the Kremlin acknowledges that many Russians have fought in Ukraine as volunteers, and such volunteers are regularly seen at checkpoints in rebel-held areas, Russia firmly denies sending its troops across the border or arming the rebels.

Throughout the conflict and often a few days before a new flashpoint of fighting would erupt, AP reporters would see as many as 80 armored vehicles a day, mostly coming from the direction of the Russian border, carrying troops and towing artillery. Their ultimate origin was impossible to establish, and the rebels strongly discouraged reporters from photographing such convoys or following them.

While rebel commanders avoid talking to journalists about Russia's role in the conflict, separatist fighters routinely confirm that clothing and ammunition are among supplies they receive from Russia.

"Yes, our brothers are supplying us — you know who," one fighter who goes by the nom de guerre Taicha said in November at a checkpoint in the crossroads town of Krasny Luch. Most rebels won't reveal their full names for fear of retaliation against their families.

Months later, on the front line west of Donetsk, a sniper who goes by the name of Kvadrat, or "Square," showed off his new rifle from Russia. "Uncle Vovka is helping us," he said, using a nickname for Russian President Vladimir Putin.

Rebel fighters often casually thank Russia for the weapons they use, and two of them expressed gratitude to Russian troops for joining them in battles that they said they would not have been won without Russia's help.

When the town of Debaltseve finally fell to the separatists on Feb. 19 after weeks of fighting over the strategic railroad hub, the true victors were long gone.

"Our friends helped us," Andrei, a fighter who fought in Debaltseve and is based outside Luhansk, said with a shy smile. Unlike his platoon, which had nothing newer than a T-72 tank, he said the Russians had modern T-90s.

"They had everything, of course," said Andrei, who like other rebels would not give his last name because his family lives in an area controlled by Ukraine's government. "If they hadn't gone in (to Debaltseve), I don't know what we would have done."

Andrei and another fighter, Alexei, said Russian troops specifically stormed a fortified area outside Debaltseve that the rebels had been trying to capture for weeks.

Alexei, who was still based in Debaltseve in March, also saw fighting last summer in Ilovaysk, another major battle where the involvement of Russian troops was strongly suspected.

He was flippant about the Russian presence in Ilovaysk, saying "just a couple of tanks pushed through." But when asked about Russians in the battle for Debaltseve, he became animated: "I'm not going to hide it: Russians were here. They went in and left quickly."

In March, the independent Russian newspaper Novaya Gazeta published a rare interview with a Russian soldier who said he fought outside Debaltseve. Dorji Batomunkuyev, who was wounded Feb. 9, said his brigade of 120 troops and 31 tanks crossed into Ukraine in February, wearing no insignia and leaving behind all documents identifying them as Russians.

He recalled how the rebels were often reluctant to attack, while he and his fellow Russian soldiers had no choice but to obey orders and advance. Batomunkuyev, a native of the Siberian city of Ulan-Ude near the Mongolian border, could not be reached by the AP.

Igor Sutyagin, a senior research fellow at the Royal United Services Institute in London, has spent months collecting evidence of the Russian presence in Ukraine, coming up with an exhaustive list of combat formations that were sent in.

The presence of large numbers of Russian troops has been a "permanent feature of the conflict" since August, Sutyagin said, with the number peaking at about 9,000 troops in late February at the end of the battle for Debaltseve.

His estimate stems from calculations based on sightings of weaponry on the ground as well as information that soldiers routinely post on social media.

The Russian Defense Ministry did not respond to numerous calls and faxes seeking comment for this story. Putin's spokesman Dmitry Peskov said Tuesday that Russia "firmly denies" reports of a Russian military presence in Ukraine.

NATO insists Russian troops continue to operate in eastern Ukraine despite the cease-fire, but it is unable to give exact figures. In recent months, according to Lt.-Col. Jay Janzen at NATO headquarters in Brussels, Russia has transferred more than 1,000 heavy weapons to the separatists, including tanks, armored vehicles, rocket systems, surface-to-air missiles and artillery.

NATO and the Ukrainian government in Kiev are convinced that Russian military personnel in rebel-held territories are providing training to a proxy force.

Gen. Philip Breedlove, commander of NATO forces in Europe, said the alliance's intelligence indicates that trainers from Russia's special forces have been instructing fighters in eastern Ukraine about sophisticated weaponry that the Russian military has supplied. Breedlove estimated 250-300 advisers are supervising the training.

One evening in November, a rebel garrison on the outskirts of Donetsk was on the move. Fighters busied themselves hauling their belongings into the back of pristine military transport trucks. One middle-aged rebel fighter, who identified himself only by the nom de guerre Kesha, said he and his comrades were leaving for training.

The instructors, Kesha let slip, were Russian nationals. Asked what his combat-hardened battalion still had to learn, Kesha said with a chuckle: "All kinds of things."

At the grounds outside Yenakiyeve, where the man referred to as the "general" observed maneuvers, the lack of formal military training among the rebels was obvious.

As infantry vehicles rolled toward a hill and opened fire, Cherny, their commander, started to shout into a walkie-talkie: "Why did you open fire? I didn't give you an order to open fire!"

Cherny told the rebels afterward that the "general" was happy: "He said you did fine. But I actually think it was not fine. There's still a lot of work to do."

The officer, whose camouflaged uniform bore no insignia, never approached the fighters and left with his entourage of protective guards after a brief word with the man in charge of the training grounds.

His black Toyota was seen later in the day parked outside a well-guarded hotel in Luhansk, less than 25 kilometers (15 miles) from the Russian border.

The hotel appeared largely empty, although potential guests were told there was no vacancy. Its restaurant was frequented almost exclusively by middle-aged men, some in camouflage with epaulets. They didn't say a word in the presence of strangers.

Every corner of the hotel was guarded by armed men with the deportment of professional soldiers. Some slouched in chairs in the lobby for days, watching Russian TV. The glittering ammunition belts of their machine guns rested on the floor. One morning, a military truck arrived at the hotel with 12 men carrying large-caliber machine guns and sniper rifles.

Although hostilities in the region have subsided since a truce was reached in mid-February, continuing skirmishes in some areas feed anxieties that the conflict could flare up again across the entire 450-kilometer (280-mile) front line.

None of the rebel fighters interviewed said they believed the war was over, adding that they are preparing for battles.

Sutyagin said Russia has created a regular force of sorts that is "more or less" capable of defending the rebels' self-proclaimed republics in the Donetsk and Luhansk regions.

"One of the most important tasks now is to keep these republics as possible leverage on Ukraine," he said. "So they need to preserve these republics, make them combat-ready, and at the same time, make sure that the sanctions against Russia are lifted."