Russia from Ukraine to Syria: Helping the Cat Down the Tree 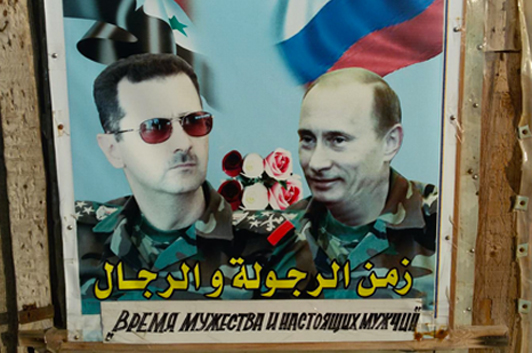 Russia’s military involvement in Syria and Ukraine obligates the United States and its European allies to bring the Kremlin back to Earth and recognize that such adventures cannot be sustained indefinitely. Russia simply does not have the money and human resources to do so in view of low oil prices and birth rates. It will find itself increasingly isolated if it supports Syria’s Assad regime and separatists in the Donbas.

Washington has recently expanded its anti-Russia sanctions list to include 29 more individuals and 30 companies including some based in Cyprus, Finland, Romania, Switzerland and the UK. These additions will surely be painful for the Kremlin elite and their business allies.

Russia has escalated its involvement in Syria to satisfy Moscow’s ambitions to be an equal partner with the US in Syria and the Middle East. To accomplish that, it gives Syria sophisticated arms to protect Assad and fight ISIS, so that it becomes an “indispensable party” to any final settlement. However, this risks having US and Russian fighter jets clash in the skies over Syria.

Unfortunately, Russia does not recognize that Syria is dead as a nation-state; it is rather a geopolitical corpse. Neither Russia nor Iran can save the Assad regime. So perhaps Russia is trying to secure the Alawi heartland with Tartus and Latakia as its naval bases.

Crimea’s annexation was the first step in Russia’s effort to return to the Mediterranean and the Indian Ocean. Projection of naval power into Syria is the second step. Next will be an attempt to secure naval bases in Egypt, the Red Sea, the Indian Ocean and the Persian Gulf. While Europe is swamped with migrants, Russia is building up a distant perimeter in the Middle East, to stall Islamic State engagement in the North Caucasus, especially in Chechnya and Dagestan.

The West keeps up pressure on the Kremlin in the hope it’ll make Moscow remember the Minsk II agreement. Yet judging by Russia’s first reaction, this is a vain hope. Russian assistance keeps flowing to the Donbass “separatists” who pose as innocent victims. Moscow officials, from politician/crooner Yosif Kobzon to TV propaganda chief Dmitry Kiselev complain that they are barred from travelling to Europe.

The Kremlin now looks like a cat stuck up a tree. It doesn’t know how to descend, so it panics and just keeps climbing. Washington and Brussels are trying very hard to coax that cat down. We shall see if sanctions are the way to ensure Russia’s safe descent and de-escalation.

The panic is starting to trickle down to Russia’s political class and especially the financial technocrats, despite all the brave talk on TV. With oil prices hovering between $40 and $50 a barrel, there’s enough money in Russian state reserves for only a couple of years. The graph for the 1998 crisis and the recovery that followed was shaped like the letter “V”. The 2008 crisis was more like the letter “U”, indicating both a slower decline and a slow recovery. The current crisis appears to be an “L” as in a fall the country is unlikely to come back from.

Part of the problem is the Russian elites’ xenophobic, paranoid view of the West. Many of those educated during Soviet times have deeply engrained dislike of Western approaches and institutions. They detest a free press, the rule of law, good governance, and social tolerance, instead embracing and thriving on corruption.

This political rigidity also undermines Russia’s ability to pass structural reforms needed to truly integrate into the modern, global economy. Instead of exporting food, Russia destroys imported meats and cheeses. Instead of inventing medicine, it refuses to import drugs it desperately needs.

Still, the economic slump hurts the Kremlin. Big oil and gas projects, such as the Power of Siberia and the Altai gas pipeline from Siberia to China, were set up when oil traded at $360 per 1,000 cubic meters. Today, Gazprom sells gas to Europe for $220-$250, while Qatar is signing six-year contracts at an even lower price. Newly discovered deposits in the Eastern Mediterranean off the coasts of Israel and Egypt may offer yet another source of gas for Europe.

To boost its energy security, Europe should limit the consumption of Russian energy. Oil futures for 2020 at $60 a barrel are definitely not a good sign for the oil-dependent Russian economy. Yet saying Russia’s economic decline would last through 2017 is an educated good guess. It may hit rock-bottom around the 100th anniversary of the October 1917 Bolshevik coup.

Sadly, instead of enacting effective anti-crisis reforms, Moscow prefers to blame it all on Uncle Sam. The cat in the tree keeps climbing. Hopefully, Western sanctions will help Russia come back to reality, and avoid a tailspin descent into chaos.

Ariel Cohen is a non-resident Senior Fellow at the Atlantic Council. He is also Director of the Center for Energy, Natural Resources and Geopolitics at the Institute for the Analysis of Global Security.