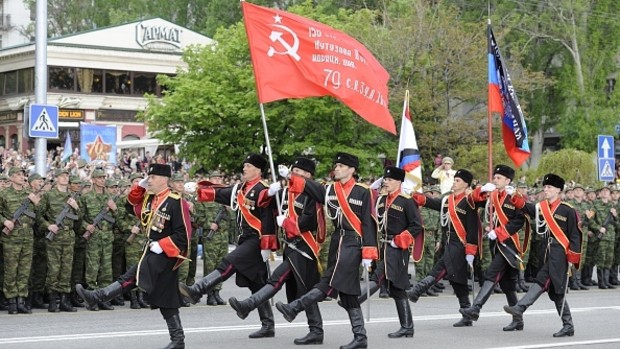 We hadn't heard much from the separatists in eastern Ukraine lately, but this week they put forward proposals for the long-term status of those regions. These are mainly in line with the Minsk peace plan of February, but they are also designed to be rejected by the government of Ukraine as a way to produce a permanent frozen conflict zone, akin to the Russian-controlled areas of Georgia.

The separatists published their proposals on the website of the "Donetsk News Agency," where they often post official statements. There is a document suggesting amendments to the Ukrainian constitution and another outlining a draft law on elections for the rebel-held areas. Both have Moscow's fingerprints; they demonstrate a lawyerly cunning that the rough and ready rebels have never exhibited.

Judging from the two documents, President Vladimir Putin's goal is for Ukraine's leaders in Kiev to reject the proposals. Then he will be able to say Ukraine has broken its political terms and renounce his own key concession -- to return control of Ukraine's southeastern border to the central government by the end of the year.

At first glance, the separatist documents seem promising. In a sharp break with previous practice, they make no mention of the unrecognized Donetsk and Lugansk "people's republics." Instead, the territory is called "a separate district with a special status."

Although the separatists had never acknowledged it before, the Minsk agreement specifies that their territory should remain part of Ukraine. It also requires judges and prosecutors to be appointed by Kiev. So if the rebels are to be the constructive party, they can't say otherwise in their proposals.

The rebels do, however, claim their right (set down in the Minsk accord) to field a "people's militia" with local commanders, allowing the current insurgent army to keep its weapons and, ultimately, control over the area.

The proposals also contain demands that simply weren't covered in Minsk. These include locally controlled election commissions, fiscal control over local businesses that would allow the "special district" to balance its budget, an exemption from the article of the Ukrainian constitution that says the country's regions are run by Kiev-appointed governors, and power-sharing between the central government and local councils.

In addition, there is a demand that Ukraine restore a law requiring the country's military non-alignment, which was rescinded under President Petro Poroshenko. That would prevent Ukraine from applying for membership in the North Atlantic Treaty Organization.

None of these demands directly breach the letter of the cease-fire agreement.

The only proposal that does is a list of "special district" towns in the draft election law. It includes: Ukrainian-held Shyrokine, near the port city of Mariupol; Piski, adjacent to the hotly contested Donetsk airport; and Debaltseve, the railroad junction the rebels seized after the Minsk deal was signed. The cease-fire explicitly enshrines last September's separation line between the rebels and the Ukrainian military, and would put all three towns on the Ukrainian side.

The separatists have submitted their proposals both to the Ukrainian Constitutional Commission, charged with working out a decentralization plan, and to the Minsk contact group, which is supposed to monitor cease-fire compliance. Ostensibly, the rebels -- and Russia -- want a dialogue with Ukrainian authorities about the documents. They know, however, that it won't take place. "We don't really want to respond to this clear provocation by the separatists," a person at the Constitutional Commission told Theinsider.ua.

Putin undoubtedly wants the commission to reject the proposals. That's why the separatists also submitted them to the international contact group, where French diplomat Pierre Morel oversees the political part of the Minsk deal. It's important for Putin to convince his Western adversaries that Ukraine won't do its part to bring about lasting peace.

That's the reason Putin's propaganda machine seized on Poroshenko's recent statement that Ukraine would "free" the Donetsk airport, part of which is in rebel-held territory, according to the cease-fire terms.

Putin wants Western leaders to get tired of Poroshenko's combative stance. As soon as they show signs of such fatigue, he can freeze the situation and proceed to build ties with the rebel-held areas on the model of other frozen conflict zones: Transnistria in Moldova, Abkhazia and South Ossetia in Georgia.

It's hard for Ukraine to break out of this Kremlin scenario. The last thing it wants is to negotiate its new constitution with Putin and his proxies. A refusal to negotiate, however, isn't going to please German Chancellor Angela Merkel or her French counterpart, President Francois Hollande, who brokered the Minsk deal. Merkel has reportedly told Poroshenko that Putin is prepared to recognize east Ukraine's "people's republics" and send in a "peacekeeping force," as he did with the disputed areas of Georgia. If she did say that, she was probably trying to compel Poroshenko to be more flexible and keep the Minsk deal alive, so Putin would be forced to hand back control of the border by the end of the year.

Such flexibility, however, would be politically impossible for Poroshenko. He doesn't have a popular mandate to create a pro-Russian autonomous area within Ukraine. His response is to try to scare his Western partners with a new Russian onslaught -- but they will only believe it when they see it.