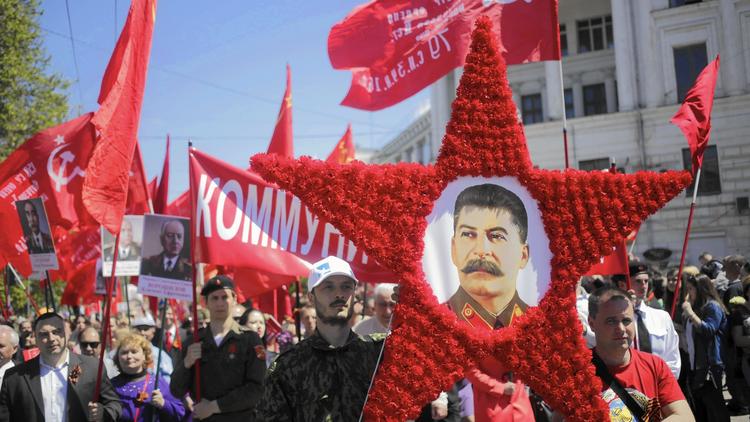 Only six years ago, President Vladimir Putin visited the Polish port of Gdansk, birthplace of the Solidarity movement that threw off Soviet domination, and reassured his Eastern European neighbors that Russia had only friendly intentions.

Putin spoke harshly that day of the notorious World War II-era pact that former Soviet leader Josef Stalin had signed with Adolf Hitler — an agreement that cleared the way for the Nazi occupation of Poland and Soviet domination of the Baltics — calling it a "collusion to solve one's problems at others' expense."

But Putin's view of history appears to have undergone a startling transformation. Last month, the Russian leader praised the 1939 nonaggression accord with Hitler as a clever maneuver that forestalled war with Germany. Stalin's 29-year reign, generally seen by Russians in recent years as a dark and bloody chapter in the nation's history, has lately been applauded by Putin and his supporters as the foundation on which the great Soviet superpower was built.

Across a resurgent Russia, Stalin lives again, at least in the minds and hearts of Russian nationalists who see Putin as heir to the former dictator's model of iron-fisted rule. Recent tributes celebrate Stalin's military command acumen and geopolitical prowess. His ruthless repression of enemies, real and imagined, has been brushed aside by today's Kremlin leader as the cost to be paid for defeating the Nazis.

As Putin has sought to recover territory lost in the 1991 Soviet breakup, his Stalinesque claim to a right to a "sphere of influence" has allowed him to legitimize the seizure of Crimea from Ukraine and declare an obligation to defend Russians and Russian speakers beyond his nation's borders.

On May 9, the 70th anniversary of the Allied war victory was marked and Stalin's image was put on display with glorifying war films, T-shirts, billboards and posters. Framed portraits of the mustachioed generalissimo were carried by marchers in Red Square's Victory Day parade and in the million-strong civic procession that followed to honor all who fell in what Russians call the Great Patriotic War.

Putin's embrace of Stalin's power-play tactics is applauded by many Russians and other former Soviet citizens as the sort of decisive leadership they longed for while watching communism collapse around them. To the proponents of a reinvigorated Russia, reformist Mikhail Gorbachev and his successor, Boris Yeltsin, are seen as having submitted Russia to Western domination.

Stalin "kept us all together, there was a friendship of nations, and without him everything fell apart," said Suliko Megrelidze, a 79-year-old native of Stalin's Georgian birthplace who sells dried fruit and spices at a farmers market. "We need someone like him if we want peace and freedom from those fascists in Europe and America."

Such sentiments are no longer confined to those with actual memories of the Stalin era. A poll this spring by the independent Levada Center found 39% of respondents had a positive opinion of Stalin. As to the millions killed, 45% of those surveyed agreed that the deaths could be justified for the greater accomplishments of winning the war, building modern industries and growing to eventually give their U.S. nemesis a battle for supremacy in the arms race and conquering outer space.

The share of Russians who look back approvingly has been increasing steadily in recent years, and the segment of those who tell pollsters they have no opinion on his place in their history has shot up even more sharply, said Denis Volkov, a sociologist with the Levada Center. He points to this year's massive Victory Day events as the Kremlin's message to ungrateful neighbors that they owe their peace and prosperity to the wartime deaths of more than 20 million Soviet citizens.

"The figure of Stalin is being justified through the war," Volkov said. "There is an attitude now that, yes, there were repressions and, yes, there were huge losses, but we won the war after all."

Stalin's standing among his countrymen has waxed and waned with the political upheavals that have wracked the Soviet Union and Russia. He was so dominant a figure in Soviet citizens' lives by the time of his death on March 5, 1953, that hundreds of thousands poured into the streets of Moscow in a chaotic outbreak of mourning when word of his passing reached a public taught to believe that life was impossible without Stalin — the Bolshevik nom de guerre he adopted, signifying "man of steel."

Nikita Khrushchev, who finally prevailed in attaining the leadership after five years of Kremlin infighting, began a campaign of de-Stalinization in 1961, moving Stalin's embalmed remains from public display next to Vladimir Lenin's to a less prominent grave near the Kremlin wall. Stalingrad, the hero city that symbolized the Soviets' watershed battle to turn back the Nazis, was renamed Volgograd, and statues and busts were removed, and streets, institutes and schools were renamed.

But the erasure of Stalin's name and likeness served also to stifle discussion of his vast crimes: Siberian exile or death sentences for political opponents, collectivization of agriculture during which millions starved, deportation of minorities and property seizures that impoverished generations. It wasn't until Gorbachev came to power in 1985 that a candid recounting of his era was attempted.

Even Putin, earlier in his presidency, fell in line with the collective spirit of criticism of Stalin's errors. During the visit to Poland in 2009, a year after he had sent troops to seize territory in sovereign Georgia, Putin appeared to reassure Russia's nervous neighbors that the nonaggression pact that paved the way for war and division 70 years earlier was to be remembered as immoral.

The Aug. 23, 1939, Molotov-Ribbentrop pact's secret protocols doomed Poland to Nazi occupation a week later and gave the Baltic states and parts of Finland and Romania to the Soviet Union. Millions of citizens of those betrayed territories died at Stalin's hand, in political purges, summary executions and slave labor camps.

The scope of Stalin's brutality remains a topic of heated debate. Late Nobel laureate Alexander Solzhenitsyn once claimed in an interview that as many as 110 million died from the dictator's vast array of repressions between 1921 and 1959, including prisoners who succumbed long after Stalin's reign. Historian Viktor Zemkov, at the other extreme, puts the number of deaths attributable to Stalin at 1.4 million.

"The estimates of 110 million to 1.4 million speak for themselves — a hundredfold disagreement," said Dmitry Lyskov, a state television talk-show host who mounted a failed campaign four years ago to put Stalin's visage on city buses to commemorate Victory Day.

The Russian Military-Historical Society, established by Putin in 2012, announced this year that a new Stalin museum was to open in May in the village of Khoroshevo, 140 miles northeast of Moscow. Stalin spent the night of Aug. 4, 1943, in a small wooden home there, the closest he came to visiting frontline Soviet troops during the four-year fight to defeat Germany.

The sanitized exhibits recounting Stalin's contributions to the war effort and postwar recovery were ready by the planned May 9 holiday. But the opening was postponed amid local opposition led by the Tver regional leader of Memorial, a group dedicated to shedding light on Russia's totalitarian era.

The stillborn museum was one of several official efforts to honor Stalin this year: A statue was erected in the southern city of Lipetsk, and splashed with red paint the night it was unveiled. A bronze likeness of the dictator was put up to mark the February anniversary of his 1945 meeting with British Prime Minister Winston Churchill and President Franklin D. Roosevelt at Yalta, a Black Sea resort now inaccessible to most of the world as only Russian aviation serves the contested Crimean peninsula.

Stalin has weathered more than six decades of historical revisions to maintain his standing as a rival to the West, "which is the context in which he interests Putin," said Nikolai Svanidze, a writer and historian whose grandfathers died in Stalin's political purges.

"Just as Stalin defeated the West 70 years ago by capturing half of Europe," Svanidze said, "we are defeating the West again today. Crimea is our Berlin, our Reichstag, and there is no way it will be restored to Ukraine in the foreseeable future."

Svanidze also predicts there will be no more credible elections as long as Putin chooses to stay in power. That, he said, is another parallel with Stalin's lifetime sinecure as Soviet leader.