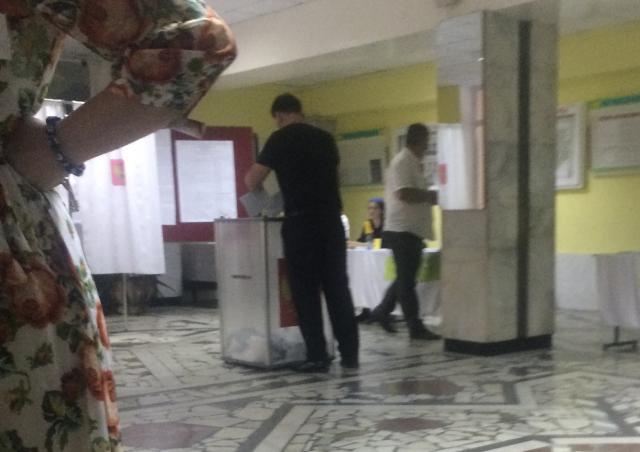 Sergei Lyutikov (C), who said he was an election observer of United Russia party, stands near a ballot box at a polling station during a regional election in Vladikavkaz, the capital of North Ossetia, Russia September 10, 2017.

(Reuters) - At polling station no. 333 in the Russian city of Vladikavkaz, Reuters reporters only counted 256 voters casting their ballots in a regional election on Sunday.

People were voting across Russia in what is seen as a dress rehearsal for next year's presidential vote. Kremlin candidates for regional parliaments and governorships performed strongly nationwide.

When the official results for polling station no. 333 were declared, the turnout was first given as 1,331 before being revised up to 1,867 on Tuesday. That is more than seven times higher than the number of voters counted by Reuters - with 73 percent of the votes going to United Russia, the party of President Vladimir Putin.

Election officials at the polling station said their tally was correct and there were no discrepancies.

Reuters reporters were there when the polls opened at 08:00 until after the official count had been completed. They saw one man, who said he was a United Russia election observer, approaching the ballot box multiple times and each time putting inside voting papers.

“We must ensure 85 percent for United Russia. Otherwise, the Tsar will stop providing us with money,” the man, Sergei Lyutikov, told a reporter, in an apparent reference to Putin.

Putin is the strong favourite to win re-election next year. Many voters credit him with restoring national pride. However, with the economy forecast to grow only 1 percent this year enthusiasm for Putin is not as strong as it has been. Political analysts say that could result in a weak election turnout.

Reuters reporters observed the vote at six polling stations on Sunday. At all six the reporters found discrepancies, of varying sizes, between the official vote tally and the number of voters the reporters counted.

The reporters were present for the entire voting day except for in one place where a reporter missed the start because they were initially not allowed in.

Kremlin spokesman Dmitry Peskov did not immediately respond to requests for comments for this story.

However, Peskov, on a conference call with reporters on Monday, said the vote showed people trust Putin. He said that there was "zero tolerance" of fraud, with reports of violations of election rules being dealt with swiftly.

READ MORE: Commentary - Here’s what a realistic Ukraine settlement may look like

United Russia's party headquarters, in a statement sent to Reuters, said it gave no orders to anyone to stuff ballots or falsify results. It said all violations would be examined by election commissions and, if the law was broken, those responsible would be punished.

The six polling stations the Reuters reporters visited were in three regions but there were thousands of polling stations operating in Russia on Sunday so the events only offer a small snapshot of what happened.

Reuters reporters are unable to assess if such practices were widespread, or whether they had a material bearing on the outcome of the election.

Opinion polls consistently show that United Russia has more support than any other Russian party.

Golos, a non-governmental organisation whose volunteers monitored the voting in 36 regions, said late on Monday it had received reports of 825 violations of election rules. They included multiple reports of inflated turnout figures and ballot-stuffing. However, the NGO said violations were down compared to previous elections.

Russia's central election commission, asked about the discrepancies witnessed by Reuters did not immediately respond.

Ella Pamfilova, chair of the commission, told a news conference after polls closed that the irregularities that had been reported to her commission would be investigated.

At polling station no. 333, located in a further education college in Vladikavkaz, capital of the North Ossetia region, voters on Sunday were electing a new regional parliament.

Lyutikov was there throughout the day. He works as an aide to Vadim Suanov, a United Russia deputy in the outgoing North Ossetia regional legislature, according to the legislature's website. Suanov, who was running for re-election on Sunday, told Reuters he knew nothing about what his employee did in the polling station.

Lyutikov cast his ballot in the first hours of voting but later inserted ballot papers about 10 times, according to the Reuters witnesses.

Lyutikov told a Reuters reporter not to document him at the ballot box, threatening to break her mobile phone if the pictures and video footage were not deleted. At one point, he showed a reporter his passport, with his name, Sergei Ivanovich Lyutikov and his date of birth, April 17 1984.

While he was approaching the ballot box, he was in sight of Yelena Khadonova, the chair of the election commission for polling station no.333.

Asked about Lyutikov's actions, she said: “I have nothing to comment on. I haven’t seen anything.”

At a parliamentary election last September, Reuters reporters at several polling stations found cases of inflated turnout and ballot-stuffing. Russia election chiefs said they would investigate, and the police launched their own investigation.

United Russia was less dominant in municipal elections in parts of Moscow, where support for opposition candidates is traditionally stronger.

At another location, polling station no. 618 in Belgorod region, a Reuters reporter accompanied election officials on their visits to voters' houses to administer home voting. The number of home voters was equal to about a quarter of those who voted at the polling station.

Under Russia's electoral rules, voting at home is reserved for cases where a voter has specifically requested a visit, because for health reasons they are unable to make it to a polling station.

Kremlin opponents and independent monitors say home voting is open to abuse because it is not subject to the same scrutiny as voting in a polling station, where monitors from several parties, and journalists, are often present.

Despite the rule that home voting is only offered on request, several of the people visited by the election officials at their homes said they had not asked to vote at home.

"First build a road and then we'll talk," he told the officials, pointing at a bumpy path leading to his house. He denied he asked them to come, but still cast his vote.

The officials said a relative or neighbour may have made the request on his behalf.

The officials who made the trip said the tally was correct. The head of the election commission at polling station no. 618, Lyubov Grushko, said: "The difference in numbers is a provocative issue, we won't discuss it."