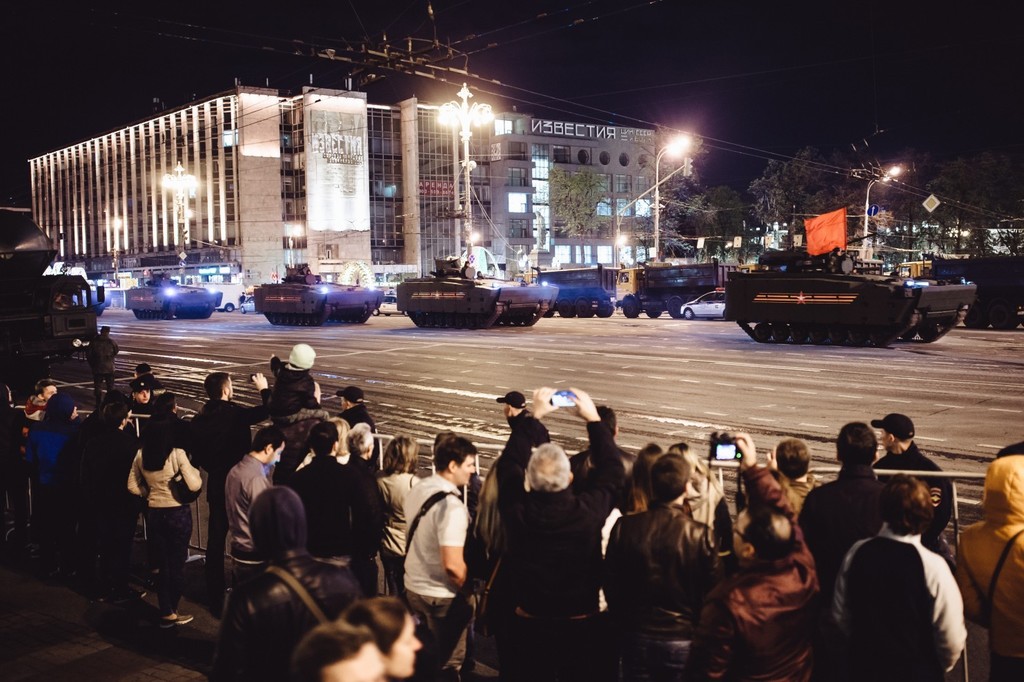 Crowds watch a rehearsal of Moscow's Victory Parade on May 5. (Max Avdeev/For The Washington Post)

MOSCOW — To most Americans, the anniversary of the defeat of Nazi Germany slips by unnoticed. To Pavel Elfimov, it’s among the biggest holidays of the year.

Ask any Russian about their family’s World War II experiences and the answer, almost invariably, is one of suffering and battlefield service. Unlike the United States, which had two oceans that largely insulated it from attack after Pearl Harbor, Russia was besieged, bombed, invaded and re-invaded during World War II. Then the Red Army swept toward Berlin and played a key role in toppling Adolf Hitler.

“You have Thanksgiving. We have Victory Day,” said Elfimov, 44, who came with his family this week to a nighttime rehearsal for Moscow’s annual Victory Day Parade. The procession is a bristling display of military might that sweeps down some of the capital’s most exclusive streets before rolling through Red Square in front of the Kremlin elite.

Russian President Vladimir Putin revived the Soviet-style tank parade in 2008, seeing the day as a way to rally citizens around the flag. But despite the hundreds of missile launchers, warplanes and antiaircraft guns that roll through Red Square every year, many Russians say that the true meaning of the holiday is more personal, 71 years after the end of the war.

“In Russia there are very few families who weren’t touched by it,” said Elfimov, who added that both of his grandfathers fought in the war and that one of them died shortly afterward, his resilience destroyed by combat. Of more than two dozen people approached at the rehearsal, all had a parent, grandparent or great-grandparent who fought in the war. Most said at least one direct ancestor died in the fighting. Soviet losses were immense — most historians estimate the Soviet death toll between 27 million and 28 million people — and the oldest generation of Russians still has aching memories of wartime starvation.

“It was impossible,” said Irina Kravchenko, 60, who said that 300 of the 500 people living in her small town in the Ural Mountains at the time of the war headed off to combat. Her grandfather never came home from the fighting, she said, a memory she wanted to make sure she passed down to her grandchild, who along with her daughter-in-law was watching soldiers on antiaircraft missile systems prepare for the parade. “The memory of service was so tough. There was an inner strength,” Kravchenko said about the townspeople who returned from war. “They didn’t like to talk about their experiences.”

World War II tends to be remembered in the United States as a victory by Americans, with the Red Army acting more or less as an adjunct. Russian memories are focused on their own sacrifices. As the veterans have died, their children and grandchildren have started to march on Victory Day, holding their photos, separately from the martial parades. That started as a nonpolitical movement in 2012, and has since been embraced by the Kremlin.