NYPD officer letter to Mayor: "We're done with your lies and abuse." 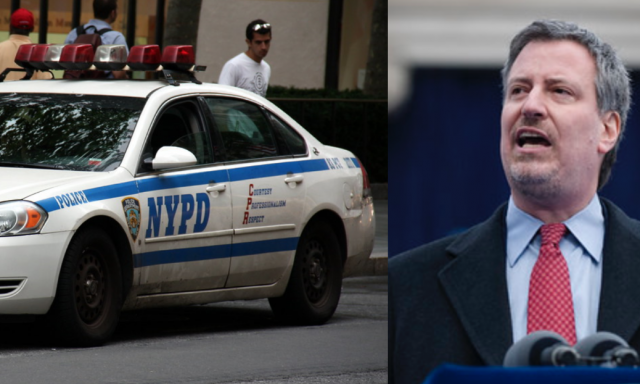 I just wanted to take a minute to say, “ENOUGH!”

You can publicly deny the allegations all you want, but I might just have a bad back from moving your daughter’s furniture out of her apartment and I know which gas stations are at which exits between Manhattan and Yale. So, let me tell you what you can do with your denials.

I went to the academy. I learned a lot of things while I was there.

I qualified on my weapon. I learned how to de-escalate volatile situation. I know the penal code.

I have spent time in multiple units, doing several years in traffic, moving to investigations as a detective. I have time with SWAT. I have been undercover. I have been a patrolman and a sergeant. I have been a supervisor.

And in all those roles, I have read and understood the job description. And nowhere does it state that I am responsible for moving your daughter’s furniture or chauffeuring your son back and forth to New Haven, CT, because he didn’t want to take the train. Bill de Blasio with his family in 2012. (Wikipedia)

Yet, here are some of the things that you deny doing.

About driving your son, you said:

“I never ordered anyone to do anything.”

I beg to differ. None of us volunteered to do it.

The drive from downtown New York City up to New Haven, Connecticut doesn’t take more than a few hours, but it’s a frustrating drive – especially considering the hefty amount of traffic running along I-95. But it’s not the mileage that’s the issue — it’s an abuse of power. Sources close to the you told Daily News that you absolutely ordered us to drive his son back and forth between the city and Yale University during his first years at the school.

In fact, the Department of Investigation is looking into whether the allegations might be true.

“I think that story is just unfair and inaccurate in so many ways,” you continued.

You think that because your son is, well…your son, that he has a greater potential of becoming a target.

I joined the NYPD to serve and protect the citizens and guests of New York City, not to be your personal assistant.

I am done running your errands.

And just so you don’t think I am simply letting you off the hook for making officers ferry your son to his Ivy League classes, I want to remind you of the fact that you had us come in and move your daughter.

Remember last summer when we were instructed to act as a moving company for your daughter, Chiara? Remember how she had been living in an apartment at 4th Street at 56th in Brooklyn for approximately two years? Remember how the time came to relocate, instead of calling a private company, you called NYPD to do the heavy lifting. You used detectives and department vehicles on city time to move your daughter. Not only were officers put to work, in a gross abuse of city resources, but two unmarked Sprinter vans that belong at City Hall were used to collect her personal possessions and transport them to Gracie Mansion? And do you also recall how your wife and First Lady, Chirlane McCray, personally directed our crew?

Breaking news, Your Honor. We don’t work for Chirlane.

Oh, by the way, she instructed us to leave a number of Chiara’s belongings abandoned on the city sidewalk. Dumping and littering is a chronic problem in this city.

A supervisor once told me that we cannot question you.

“It’s all just part of the job. We just do it out of respect.”

And by the way, that $400 bullet-proof vest you borrowed back on 2016 for the comedy sketch you did with the cast of The Wire, we are still waiting to get that back. That is a vest we could put on a cop working the streets.

You do not care about members of law enforcement. And now, your actions (or lack thereof) are becoming a danger to the police.

Perhaps you missed it when former NYPD police chief Louis Anemone was interviewed by Fox, but he criticized you for your treatment of those who hold the thin blue line. For your benefit, here is what he said:

He also said the recent blatant disrespect for New York officers regarding the water bucket assaults would have never happened under the watch of former mayor Rudy Giuliani. He not only had a pulse on the city, he also had our backs.

“It’s disgraceful,” Anemone continued. “He’s the chief executive of this city of New York, the largest city in this country. He has not taken the lead for security, for public security, and for supporting the police. He’s been behind, way behind.”

Mr. Mayor, your actions and attitude toward this police force have bred contempt and hostility in the streets. You are partly to blame for the water assaults.

Yet, we will do what wey need to do in order to maintain control, regardless of what the public will say afterward.

I wish this was all we had on you; but let me continue.

I want to personally thank you for repeatedly warning your son about the “dangers of police brutality.”

“I have had to have very, very serious talks with my son, Dante, about how to protect himself on the streets of our city and all over our country, including how to deal with the fact that he has to take special caution because there have been too many tragedies between our young men and our police.”

Those were your words Mayor.

Even with your belief that we all have a proclivity for violence aimed at innocent young men of color, you still put him in the car with us for the numerous drives to and from New Haven. That leads me to ask: do you even care what happens to your son?

And let’s not forget, you skipped out on a dedication for fallen heroes so that you could go to the gym and drink your morning coffee.

Cuomo skips 9/11 hero’s wake to zipline, de Blasio blows off funeral to campaign to be president

Then you he missed Luis Alvarez’s wake, a 9/11 hero, in order to focus on your joke of a Presidential campaign.

Just so you don’t think I am alone in that belief, one of your administrative staffers said,

“It’s a joke. I think that he knows that he can’t win. It’s just a lot of eye-rolling … He’s doing it because he’s got a big ego and needs to prove something, and I don’t think he’s going to quietly go away and become an adjunct professor at Hunter.”

I will continue to serve and protect, because I love this city and I love what I do.

But you, I have no respect for you. But if you need me to do something for you and your family, that is actually within my job description, then I will be there.