No, you can’t take an American flag from people who you think are mistreating it 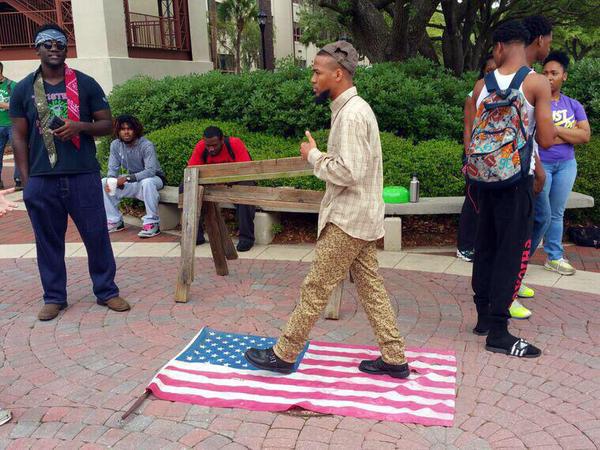 Michelle Manhart, a former Air Force staff sergeant, was arrested Friday in Georgia after taking an American flag away from a group of Valdosta State University students. Before her arrest, students accused the police on the scene of treating Manhart with deference because of her race. (Michelle Manhart/Facebook)

Police in Georgia arrested a U.S. veteran on Friday after she took an American flag away from students who were trampling it. Michelle Manhart, a former Air Force staff sergeant who left the military after posing nude for Playboy, took the flag from a group of African American students at Valdosta State University who were demonstrating against racism. Manhart, who is white, was handcuffed but has not been charged with a crime.

A video of the confrontation, recorded by Manhart’s daughter, shows a strange three-way standoff between students, Manhart and VSU police. The spat could hardly have been more symbolic, with both sides claiming ownership of the American flag and expressing outrage.

“This flag belongs to the entire United States,” Manhart says on camera while clutching the stars and stripes.

“Is that not theft?” a student says moments later. “I swear to God, if this had been in the ‘hood, you’d have had me in handcuffs already.” …

“You are disobeying our lawful command,” the cop [who detained Manhart] says [on the video]. “Let go of this flag, ma’am.” When Manhart continues resisting, the officers pin her to the ground and handcuff her to a smattering of applause from the students.

“Really guys?” Manhart’s daughter says to the cops. “You couldn’t just stand up for the flag?”

When a cop hands the flag back to the students, Manhart calls him a “slimy little piece of s–.”

Trampling on an American flag that you own (or that is owned by someone who has given you permission), like burning the flag, is constitutionally protected symbolic expression, as Texas v. Johnson and United States v. Eichman make clear. (Flag desecration statutes, like this federal statute, remain physically on the books, but they are invalid and unenforceable.) And people have no right to attack protesters whose constitutionally protected message they find offensive, or to take the protesters’ property. Patriotic sentiment does not exempt Ms. Manhart from the law.