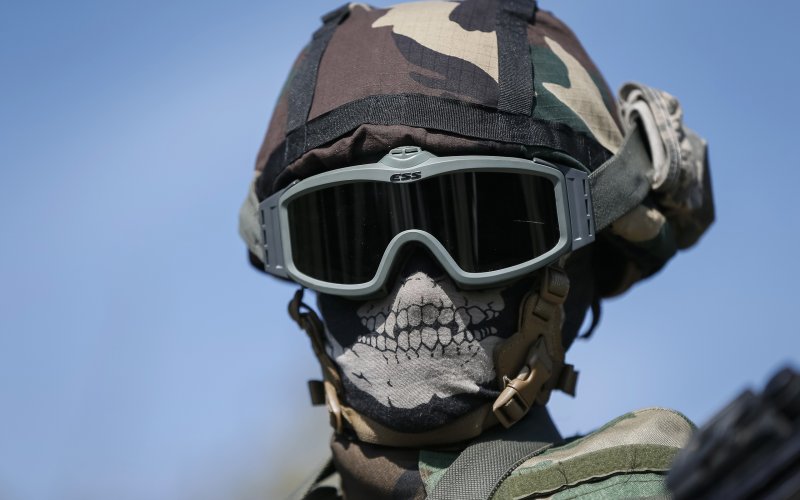 The war in Ukraine may have faded largely from international headlines, but Vladimir Putin’s drip-drip invasion continues. In the last two weeks, forensic evidence, some of which has been reported by monitor organizations and senior Western diplomats, the rest corroborated by eyewitness photography and video, only confirms what the U.S. fears most: A summer offensive is inevitable.

On May 5, the Ukrainian government released new data which says that they have lost 28 towns to Russian-backed separatists since February 18. That was the day the strategic town of Debaltsevo, which guarded a key highway to separatist-controlled regions, slipped from Ukraine’s control. The map of separatist territory is as alarming as it is illustrative, especially when it is combined with the daily reports of ceasefire violations and fighting coming out of both the Organization for Security and Co-operation in Europe (OSCE) and Kiev.

On May 6, Ukrainian President Petro Poroshenko addressed the National Security and Defense Council and warned that Russia has 50,000 troops on the border and its proxies have more than 40,000 fighters inside the country. That’s not only a combined 50% increase in possible invaders over July of last year, the month which proceeded the “Russian invasion” on the Ukrainian mainland. It’s more than enough soldiers to invade and gobble up a significant amount of Ukrainian territory.

“There is a convincing evidence that Ukraine strictly complies with the Minsk [ceasefire] agreements and militants constantly violate them,” Poroshenko noted. Separatists do not allow international observers to verify their withdrawal of heavy weaponry. “Militants regularly shoot Ukrainian positions, engage in reconnaissance and subversive activity and provoke armed confrontations in order to disrupt peaceful settlement of the conflict.”

One day later, May 7, the OSCE witnessed a significant amount of fighting both near Donetsk and around a town called Shirokino, 20 kilometers east of Mariupol—part of a trend of heavier fighting which started in late April. The OSCE also reported that one of their surveillance drones was jammed for 10 minutes while attempting to monitor the movement of separatist tanks near Donetsk, in violation of the 50-kilometer demarcation line agreed upon by both sides.

While the OSCE reports that it has seen an increase of heavy weaponry within the demarcation line for weeks, Ukraine maintains that it is only returning fire and it is the Russian-backed separatists who are on the offensive. On May 8, the day after the OSCE’s unmanned aerial vehicle (UAV) was jammed, the OSCE witnessed three Ukrainian tanks in government-controlled territory—an admitted violation of the negotiated ceasefire. That same day the OSCE witnessed 30 separatist tanks moving toward the front lines within the demarcation line—10 times more than the Ukrainian government was deploying. The OSCE also observed a testing ground for advanced weaponry—proof, according to the U.S. ambassador to Ukraine, Geoffrey Pyatt, of “Russia’s train and equip program in plain sight.”

Each day since has provided more evidence that the Minsk agreement is little more than a piece of paper. For weeks the OSCE, NATO, and citizens of eastern Ukraine brave enough to snap pictures and video have been warning that a large amount of heavy Russian armor and artillery has been headed back to the front lines. The separatist leadership has maintained that this equipment was only moving around to prepare for military parades on Saturday, May 9, to commemorate the 70th anniversary of Nazi Germany’s capitulation to the Soviet Union in World War II. While the movement of this equipment would be a violation of the Minsk agreement whatever the floated reason, since the parades ended the weaponry hasn’t been moved back beyond the demarcation line.

It’s not just the amount of firepower now in separatists’ hands that is alarming observers. It’s also the kind of weaponry—specifically, the Strela-10 anti-aircraft missile system.

The Strela-10 is designed to supply close support to troops and vehicles near the front line of fighting. It’s meant to shoot down fast-moving, low-flying aircraft such as helicopters or non-stealth jets. There is significant evidence that the Russian military regularly includes the Strela-10 in important convoys because it can protect against immediate air threats while longer-range weapons (such as the Buk system, which shot down a MH17 passenger jet in 2014) can perform the same function from further afield. In fact, the first time the Russian-backed fighters were ever seen using T-72 tanks, Strela-10s were filmed escorting the vehicles from a border crossing in Lugansk just seven days before the MH17 was immolated. There are no documented cases of the Strela-10 system having been captured by Russian-backed separatists, and the T-72 has not been used by the Ukrainian military in this conflict.

On May 2, three Strela-10s were spotted escorting a convoy of two T-64B tanks, three BMP-2s, three BTR-80s, three 2S1 Gvozdika self-propelled howitzers, three BM-21 Grad MLRS, three trucks towing artillery pieces, perhaps 2A65 152mm howitzers, and several other military trucks and fuel tankers through Lugansk. On May 5 Strelas were seen parading through Donetsk, escorting a similar convoy. But if they were only in Donetsk for the May 9 parade, it’s curious that a similar convoy was spotted by the OSCE within the line of demarcation near Donetsk on May 10, suggesting that the weapons have not returned to their holding areas as specified in the Minsk protocol.

Could these weapons systems have been mobilized just to deter Ukraine and fortify standing separatist positions? Well, the Minsk protocol was designed to forestall any such scenario and explicitly called for de-escalation rather than retrenchment. Also, Western military officials seem to think the presence of this materiel has another purpose altogether. In late April, NATO Supreme Commander and U.S. Air Force General Philip Breedlove warned that the Russian military had taken advantage of the ceasefire to train and equip the separatists and to “reset and reposition” their forces. Nor were these mere training exercises. “Many of their [the Russians’] actions are consistent with preparations for another offensive,” Breedlove said, adding that Russia never rattles its saber without the attendant follow-through. Breedlove also suggested that Russia had further integrated its own military’s “[c]ommand-and-control, air defense, support to artillery…making a more coherent, organized force out of the separatists.” Then, on May 11, NATO Secretary General Jens Stoltenberg also warned that the separatists are now so well equipped that they could launch an all-out offensive against the Ukrainian military on little notice and without direct military assistance. Again, if all this was just to hold the line, then why agree to Minsk in the first place, when that protocol was designed to do just that without the benefit of tanks or APCs?

There’s the added alarm of what the separatist leadership itself says about its imminent plans. On April 23, Vice News broadcast an interview with Alexander Zakharchenko, the self-declared head of the “Donetsk People’s Republic.” Asked if he saw the Minsk agreement holding, Zakharchenko was unambiguous: He did not want it to hold.

He categorically rejected one of the main planks of that diplomatic settlement—that the Donbass remain part of Ukrainian territory. “Do you suggest we give up, so our territory can fall into Ukraine’s hands?” he told Vice News. “So that they can put us back into the stalls, like we are some kind of cattle? So that they can drag us to join the EU, to be living off American handouts? We do not want that. We declared that we want to be friends with Russia and that’s what we are doing. That’s what the majority of the local population want. At least 95 percent.”

Zakharchenko, who wants to see the return of the Soviet Union, mooted the possibility of other conducting “referenda” to certify their breakaway status from Ukraine.

“Aside from Zakharchenko’s belligerent rhetoric,” a senior Western diplomat told The Daily Beast, “the most worrisome evidence is the continued active tempo of Russian training activities with the separatist armies, and the presence of advanced Russian surface-to-air missile systems near the contact line in blatant violation of the Minsk agreement.”

As ever, the Putinists command one side to abide by a compact they never had any intention of honoring themselves. Only now, they’ve managed to embarrassingly snare the State Department into defending their own arguing position. While John Kerry was breaking bread (and potatoes) with Putin and Russian Foreign Minister Sergei Lavrov at the Russian president’s personal residence in Sochi last week, Poroshenko made an ambiguous statement about plans to regain Donetsk International Airport, once the cynosure for some of the fiercest fighting the war as yet seen and some of the bravest Ukrainian resistance to better-armed separatists.

“I have no doubt,” Poroshenko said at the premiere of Airport, a new documentary about the battle for that installation, “we will free the airport, because it is our land. And we will rebuild the airport.”

Kerry was in Russia on his first state visit since 2013, and clearly there to ask for various favors from a government the United States has sanctioned yet nevertheless believes it still needs to resolves various foreign crises from Syria to Iran and Ukraine. So the opportunity to scandalize America’s top diplomat—something of a contact sport in Russia these days—was too good for the Kremlin-owned press to pass up. Asked by the state-owned media about Poroshenko’s provocative although nebulous pledge, Kerry replied as the media hoped he might by saying that he hadn’t seen the Ukrainian president’s remarks but would warn him to “think twice” before kickstarting any military operation.

The U.S. embassy in Moscow tried to downplay the inevitable awkwardness this created between two allies, noting, for instance, that Poroshenko has elsewhere ruled out taking back any of the Donbass by force. But Moscow just sat back and enjoyed the squirming. Vitaly Churkin, Russia’s ambassador to the UN, said, “It’s an important thing that Kerry made this statement and that he said the U.S. believed it was crucial to observe the accords reached in Minsk on February 12,” neglecting of course to mention how his own government has “observed” those accords.

The Ukrainians, meanwhile, were left furious at Kerry for kowtowing to the Kremlin (again) and now worry that the Obama administration has gone out of its way to telegraph its own disposition should fighting indeed escalate in the coming weeks. Kerry went so far as depict the Ukraine crisis as the result of bilateral culpability: “Whoever has instigated” war, he said, should stop, as it has gone on too long already. He also floated the possibility of U.S. sanctions relief on Russia “if and when Minsk is fully implemented.” Washington, it is feared in Kiev, will do nothing if Minsk is turned to toilet paper. And that’s as good as an engraved invitation for Putin to proceed as he’d already planned to anyway.