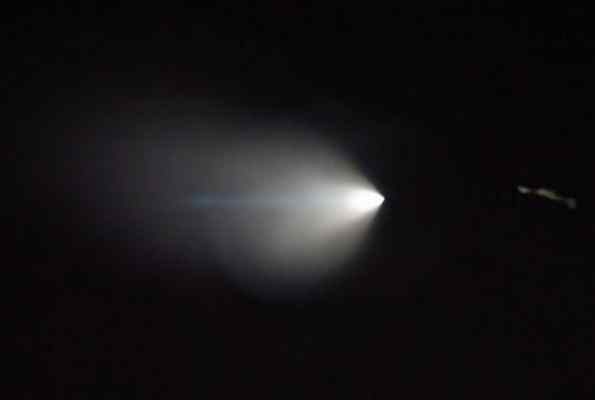 This Saturday, Nov. 7, 2015, image from video provided by Julien Solomita, shows an unarmed missile fired by the U.S. Navy from a submarine off the coast of Southern California, creating a bright light that streaked across the state and was visible as far away as Nevada and Arizona. A Navy spokesman told The San Diego Union-Tribune that the Navy Strategic Systems Programs conducted the missile test at sea Saturday from the USS Kentucky, a ballistic missile submarine. A second test was conducted on Monday. (Julien Solomita via AP)

The U.S. Navy launched a second missile from a submarine off the coast of Southern California on Monday, two days after an unannounced launch that caused alarm and speculation along the West Coast among those who witnessed the missile streaking through the night sky.

The tests were conducted by the Navy’s Strategic Systems Programs.

According to the Navy, today’s launch from a submarine of an unarmed Trident II D5 ballistic missile was the second and final part of what it calls demonstration and shakedown operations.

Both missiles landed in the Eastern Missile Range near Kwajalein Atoll in the Marshall Islands.

Although the launches were not announced in advance, Los Angeles World Airports announced last week that the military airspace west of LAX was expected to be active for one week for unspecified reasons, causing a change in arrival patterns between midnight and 6:30 a.m.

During those hours, incoming flights normally land at LAX from over the ocean to reduce noise for residents living east of the airport. Due to the military airspace activity, however, incoming flights were going to use the over-land westerly route when approaching the airport, according to LAWA.

Testing a missile without issuing broad prior notice is essential for national security, a military expert told the Los Angeles Times.

On the one hand, the military needs to give local aviation officials enough information as to the time and place of an upcoming test to ensure no planes are in the area, Loren Thompson, a military analyst with the Lexington Institute, a public policy think tank headquartered in Arlington, Virginia, told the paper.

But at the same time, the military is determined to keep tests shrouded in secrecy in order to thwart any efforts by potential adversaries — namely Russia and China — to monitor the missile launch and flight, he said.

The confusion and social media uproar that erupted Saturday night is an unfortunate but necessary tradeoff, Thompson said.

The need for secrecy was all the more important given the type of weapon the Navy launched Saturday from a submarine, according to Thompson. The Trident II missile is a centerpiece of the U.S. military’s ability to deter a nuclear attack, and modernizing the weapon is a top priority, he said.

Knowing in advance that a Trident was going to be tested would give prying eyes, for example, sailors on a Russian submarine in the Pacific, the ability to gather valuable information, Thompson said. Tracking its trajectory, speed, electromagnetic emissions and other characteristics in real time could provide insights into potential vulnerabilities, he said.

“The Russians and Chinese would have great interest in finding ways to defeat this type of missile,” Thompson said.