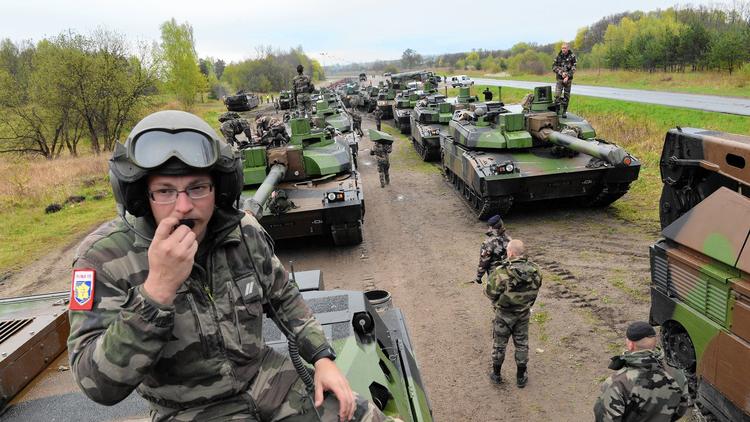 NATO countries are staging massive air, land and sea exercises across Russia's northern borders this month in response to warnings from the Kremlin and strategic analysts that President Vladimir Putin's threats to use nuclear weapons are more than bluster.

The exercises in Estonia, Lithuania and Norway involve more than 21,000 troops and state-of-the-art military hardware. Coupled with U.S. training of Ukrainian forces and the recent activation of a 3,000-strong rapid-reaction force to defend Eastern Europe, they appear intended to send a message to Moscow that the alliance is ready to defend its new members in Russia's backyard.

Troops, trainers and readiness testers of the North Atlantic Treaty Organization have been bolstering defenses along what Eastern Europeans call the new Iron Curtain. Although it still divides East from West, this time there are former Soviet subjects on the western side of the ideological border.

NATO's widening presence along Russia's frontiers is a reaction to Putin's aggressive actions against Ukraine over the last year, which have rattled nerves throughout the arc of states that still has painful memories of postwar Soviet domination.

On Monday, Estonia launched the biggest ground maneuvers in its history, Operation Hedgehog, drawing 13,500 troops from across the 28-nation alliance. In Lithuania, Operation Lightning Strike deployed more than 3,000 soldiers and police officers on a mission to test the effectiveness of military-civilian collaboration. The goal: to defeat the kind of stealth invasion and proxy war that Ukraine has been fighting for more than a year against pro-Russia separatists whom the Kremlin denies arming and instigating.

NATO's widening presence along Russia's frontiers is a reaction to Putin's aggressive actions against Ukraine over the last year, which have rattled nerves throughout the arc of states that still has painful memories of postwar Soviet domination.

On Monday, Estonia launched the biggest ground maneuvers in its history, Operation Hedgehog, drawing 13,500 troops from across the 28-nation alliance. In Lithuania, Operation Lightning Strike deployed more than 3,000 soldiers and police officers on a mission to test the effectiveness of military-civilian collaboration. The goal: to defeat the kind of stealth invasion and proxy war that Ukraine has been fighting for more than a year against pro-Russia separatists whom the Kremlin denies arming and instigating.

Submarines and an additional 5,000 sailors from the United States, Germany, Norway and non-NATO member Sweden have been engaged in antisubmarine maneuvers in the North Sea that have also drawn in surface vessels and aircraft from across the Western alliance.

NATO's saber-rattling hasn't exceeded the scale of Russia's recent war games, which have included a March show of force in the Barents Sea involving 30,000 soldiers and sailors and hundreds of warships and aircraft. But NATO's sweeping operations and displays of firepower have bolstered Putin's claims to be the target of a U.S.-inspired plot to conscript Moscow's former allies in isolating Russia to leave it vulnerable to Western-executed "regime change."

Putin has been making pointed reminders to his Western foes that Russia is nuclear-armed and ready to defend itself by any means necessary. In a docudrama produced for the March 18 anniversary of Russia's annexation of Ukraine's Crimea region, Putin said he contemplated the use of nuclear weapons in what the film cast as a white-knuckled confrontation with NATO over its purported luring of Ukraine away from its traditional alliance with Moscow.

Veteran military and political analysts say the threats to go nuclear shouldn't be brushed off as idle.

Russia's conventional armaments, for all their ability to roll over antiquated armies in Georgia and Ukraine, are woefully inadequate for any fight against NATO, said Pavel Felgenhauer, an independent defense analyst whose contacts within the military hierarchy date to the Soviet era.

Putin executed a "strategic turn" in 2007 when he announced a massive rearmament program for the current decade, costing more than $500 billion in today's dollars and much of it focused on modernizing the nuclear arsenal, Felgenhauer said.

"Russia has already shown it is prepared to use the military to force its will on neighbor countries to secure its sphere of influence," said Felgenhauer.

"Russia's leaders know they can't respond to the United States with a conventional attack so they have to resort to brinkmanship," with warnings that any provocation could be answered with a nuclear strike, he said.

An atmosphere of imminent danger has been whipped up in Russia, Felgenhauer said, by reports spread from the hawks in Putin's inner circle that U.S.-funded missile shields planned for NATO allies Poland and Romania are intended to put Putin's residences in St. Petersburg and Sochi within range of Western rockets.

"Events have been overtaken. We are now in a prewar situation," the analyst said of the sentiment prevailing among ordinary Russians.

Dmitri Trenin, director of the Carnegie Moscow Center, said he fears Putin has so effectively cast himself as all that stands in the way of Russia being vanquished by NATO that any perceived setback at the hands of the U.S.-led alliance could provoke him to play the nuclear card.

"He can't afford to lose Donbas," Trenin said of Putin's ill-disguised backing of pro-Russia separatists in eastern Ukraine's Don River basin. "At some point Mr. Putin might go for a nuclear strike, demonstrating that he is prepared to do what needs to be done."

Failure to "protect" eastern Ukraine's Russian-speaking communities from the government in Kiev, which Kremlin propaganda portrays as dominated by anti-Russian fascists, would lead to Putin's downfall, Trenin said.

"The country would experience not so much regime change as chaos," he said of the consequences of a sudden Putin ouster. The fear and confusion that would ensue, he said, would be similar to that which led to the outflow of traumatized masses after Soviet dictator Josef Stalin's death in 1953.

In a revised defense mission statement signed into law by Putin on Dec. 26, the Kremlin accused the United States of undermining "the established global stability and balance of power" with its development of the Prompt Global Strike program. The weapon system is designed to position rockets capable of striking anywhere in the world so swiftly as to preclude a reaction from the target.

Given the steady drumbeat of nuclear threats, those in Eastern European countries that are now NATO members are skeptical that the alliance will be able to protect them.

"It's clear that we find ourselves in a period of high risk of war in Poland. We live in the shadow of Russian imperialism," said Polish lawmaker and historian Pawel Kowal. "This is the last paroxysm of colonial power. It takes a long time for an empire to fall."

Latvia's deputy defense minister, Janis Sarts, said he worries about Russia's decision to boost military spending by 30% this year even in the midst of the worst economic crisis since the global recession of 2008. "This is the action of someone who has the intent of having a war somewhere," he said.

Putin's nuclear threats have been issued with increasing frequency since he returned to the Kremlin helm in 2012.

"It's best not to mess with us," Putin observed for the television cameras that followed him on an August visit to a Kremlin-sponsored youth camp. "I want to remind you," he said to his imagined audience afar, "that Russia is one of the leading nuclear powers."

Two months later, he accused unspecified "partners" of trying to blackmail Russia with their encroachment into the traditionally Moscow-allied East, warning that they should "remember what discord between large nuclear powers can do to strategic stability."

NATO diplomats told journalists this year that they were concerned by reports that the Kremlin and its chiefs of staff have lowered the criteria for when a nuclear strike would be justified.

Public proclamations of readiness to use nuclear weapons haven't been limited to Putin. The commander of Russia's Strategic Rocket Forces, Lt. Gen. Sergei Karakayev, announced in December that the Kremlin was planning to resume the Soviet-era tactic of mounting intercontinental ballistic missiles on trains in response to the U.S. advanced strike capability. He has also said he stands "ready to push the button" in offensive use of the nuclear missiles if ordered to do so.

In February, the Kremlin's television propagandist in chief, Dmitry Kiselev, called the Soviet Union's Cold War-era pledge to never be the first to use nuclear weapons a side effect of "political romanticism." Russia's current military doctrine imposes no such restraints, he told an audience of his weekly current affairs program, saying that Russia has "no more illusions." A year ago, as Western leaders were contemplating sanctions on Russia for its Crimea seizure, Kiselev observed that Russia is the only power "capable of turning the United States into radioactive ash."

Russia's ambassador to Denmark, Mikhail Vanin, warned in a late March interview with the Danish newspaper Jyllands-Posten that if Copenhagen followed through on its pledge to contribute naval radar capabilities to NATO's new missile shield, "Danish warships will be targets for Russian nuclear missiles."

Andrei Kortunov, director of the Russian International Affairs Council, attributes the Kremlin's ominous warnings to Russian leaders' sense that they are being treated unfairly by a Western world that refuses to respect its opposition to former allies defecting to NATO.

"There is this attitude in the West that all was fine in Ukraine until this hooligan in Moscow came along and, without justification, decided to rewrite the international order. But that is not the case," said Kortunov.

Ukrainian President Petro Poroshenko is treated by fawning Western officials and media like "a second [Vaclav] Havel or [Nelson] Mandela," Kortunov said of the late Czech dissident and South African freedom fighter, both revered figures who traveled a path from prison to the presidential palace. The Kiev leadership isn't run by fascists, as Russian media portray it, Kortunov said, but "neither are they Easter bunnies."

Ukraine's parliament in late April passed a law criminalizing denigration of independence fighters from World War II, including the Nazi-allied brigades that collaborated in atrocities against communists and Jews.

The three-month revolt by pro-Europe Ukrainians that overthrew Kremlin-allied President Viktor Yanukovich 15 months ago sent shock waves through the Kremlin, where the display of popular will for change was viewed as a threat to Putin's hold on power.

The warnings and references to Russia's nuclear capacities have ratcheted up the rhetoric on a scale that only Putin can control now, Kortunov said.

"No one really knows if Putin is ready to launch nuclear war. Maybe Putin himself doesn't know," he said. "But the message delivered is clear: We can be more decisive than our opponents and they should keep that in mind. Who is readier to escalate: Barack Obama or Vladimir Putin? The answer is evident."