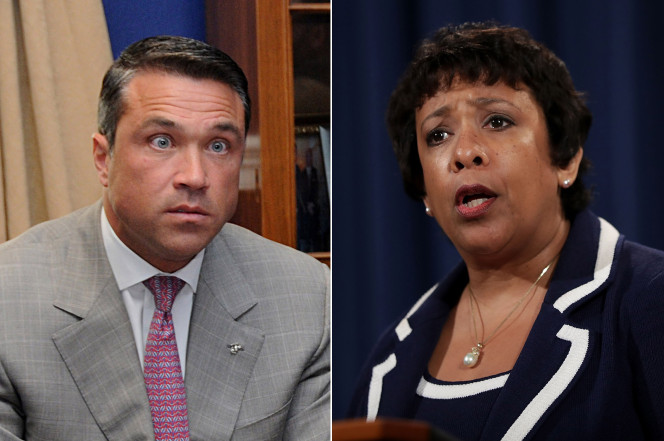 Michael Grimm, Staten Island’s ex-con ex-congressman, says that his stint in jail got Loretta Lynch her job as U. S. Attorney General.

The admitted tax cheat accused Lynch — the Brooklyn federal prosecutor who launched the case that forced him to lose his seat in Congress — of railroading him for political gain in a Saturday radio interview.

“They made a deal with Loretta Lynch, that if she could take me down on anything, didn’t matter what it was, if she could find anything, she would be put to the top of the list for Attorney General,” Grimm said.

“Two months after my bogus sham indictment, she’s the Attorney General of the United States. It’s the definition of corruption in politics.”

Grimm, who announced a bid to wrest his former congressional seat from fellow Republican Dan Donovan last week, has called the case that sent him to the slammer for eight months a “witch hunt.”

He presented no evidence for his quid pro quo allegation, which he made on Breitbart News — home of his newfound ally, former Trump strategist Steve Bannon.

Lynch did not respond to a request for comment.