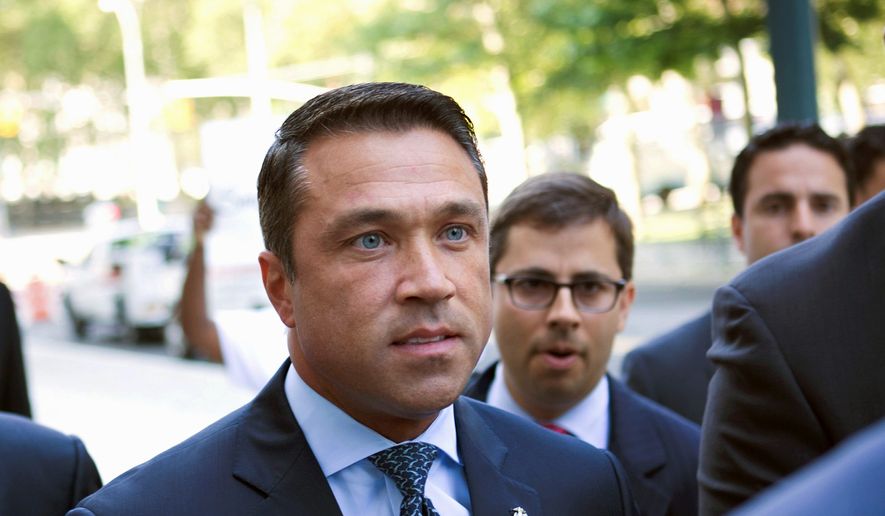 Former Rep. Michael Grimm is out for political redemption in the boroughs of New York City, where he is running to unseat Rep. Dan Donovan and put behind him a checkered past that includes a prison sentence for tax fraud, as well as a memorable moment on Capitol Hill when he threatened to hurl a reporter over a balcony and break him in half “like a boy.”

Mr. Grimm has returned with the same rough-and-tumble brand of politics that made him both a polarizing figure and a favorite son in the 11th Congressional District and drawn comparisons to President Trump, who remains immensely popular in the area.

But Mr. Trump threw his “full endorsement!” behind Mr. Donovan, providing the incumbent with cover in a race that has boiled down into a fierce fight over who would be more loyal to the president.

Richard Flanagan, chair of the Political Science and Global Affairs Department at the College of Staten Island, said Mr. Grimm has maintained a strong connection to voters in the conservative bastion of liberal New York politics that is not only built off his combative style, but also off his strong ties to former GOP Rep. Guy Molinari and the devotion he showed to constituents in the aftermath of Hurricane Sandy in 2012.

“In a lot of ways, he is Trumpian,” Mr. Flanagan said. “He has a big mouth. He gets into trouble with it. He is very pugnacious.”

“A lot of the stuff that probably the rest of the country is looking at critically … is looked at as sort of foibles, not critical flaws, and in a sense he has adopted the persona of Trump as an anti-hero and people are connecting to it,” he said. “Even felonies are OK in Staten Island.”

The Donovan campaign said Mr. Grimm’s attempts to cast himself as conservative belies the record he compiled in Congress and attempts to claim Mr. Trump were crippled when the president picked sides.

“Obviously the president’s endorsement has had a tremendous impact, and I think it really was a game changer in a lot of ways because it completely undercut Grimm’s entire rationale for running,” said Jessica Proud, spokesperson for the Donovan campaign, which is touting the Trump endorsement in television ads and campaign mailers. “Not only did he give a glowing endorsement of Dan, but he also told people not to vote for Grimm.”

Indeed, Mr. Trump compared Mr. Grimm, a former FBI agent and Marine, to Roy Moore, who lost a special election race for the Senate seat to Democrat Doug Jones in deep red Alabama after coming under siege by allegations of sexual misconduct.

But the endorsement didn’t go off without a hitch.

Mr. Trump said Mr. Donovan “voted for Tax Cuts” when in fact he was among a dozen Republicans that lined up against the $1.5 trillion tax cut Mr. Trump signed into law last year.

Mr. Grimm has held up that that vote, as well as others on immigration and Obamacare as proof that Mr. Donovan has not had Mr. Trump’s back when it mattered most.

“Over the last three years, my opponent just hasn’t been sleeping in his office, he has been sleeping on the job,” Mr. Grimm said in a recent debate.

Mr. Grimm also has claimed that Mr. Donovan tried to scare him away from running by offering to seek a pardon on his behalf from Mr. Trump.

Mr. Donovan, who won the seat in a special election in 2015 after Mr. Grimm stepped down, vehemently denies the accusation.

A half dozen Democrats, meanwhile, are running for their party’s nomination in the district, which encompasses a piece of Brooklyn and Staten Island.

Political handicappers say Republicans are favored to defend the seat.

But both parties agree that if Mr. Grimm advances, his past could haunt him, putting the seat more in play.

Mr. Grimm was elected in 2010 and stepped down in 2015 after pleading guilty to filing a false and fraudulent tax return related to a restaurant he ran in Manhattan. He admitted to hiring illegal workers, paying them off the books, and lying under oath to cover up his crimes.

Despite that, he is still in the race.

A Siena College poll of likely GOP primary voters released earlier this month found Mr. Grimm had a 10 point lead over Mr. Donovan. Part of the survey was completed before the Trump endorsement.

More than 82 percent of respondents said they have a favorable view of Mr. Trump in the district, which supported Mr. Trump in the 2016 presidential race and is home to 30,000 more registered Democrats than Republicans.

John McLaughlin, a GOP strategist, said things could get interesting if Mr. Grimm wins the Republican race because Mr. Donovan has already secured his place on the November ballot through third party endorsements.

“You could have Donovan and Grimm split the pro-Trump vote and Democrats could then have an opportunity to win,” he said.