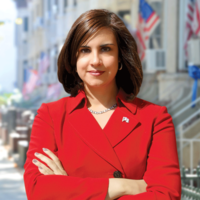 Max Rose supports sanctuary policies like Bill de Blasio’s that prevented these individuals from being turned over immediately to federal immigration officials.

In a horrendous act, an illegal immigrant was arrested for an assault when he attacked and slashed his own father, but the NYPD was forced to ignore an ICE detainer request issued for him on the same day he was arrested. After being released without bail, he was arrested weeks later for sexually abusing and murdering a 92 year old Queens’ woman.And on Christmas Eve, an unlicensed illegal immigrant who fled after striking and killing a mother of three, was later arrested and immediately released without bail, under the terms of New York’s new bail reform and sanctuary policies. Thankfully, ICE agents have now apprehended him.

Max Rose supports sanctuary policies like Bill de Blasio’s that prevented these individuals from being turned over immediately to federal immigration officials.

Whether it's sanctuary cities, the dangerous bail reform or the closing of Rikers Island,Max Rose is on the record supporting the radical, far-left criminal justice policies of Bill de Blasio, Andrew Cuomo and their progressive pals.Max Rose is on the WRONG side of these issues and must be replaced.