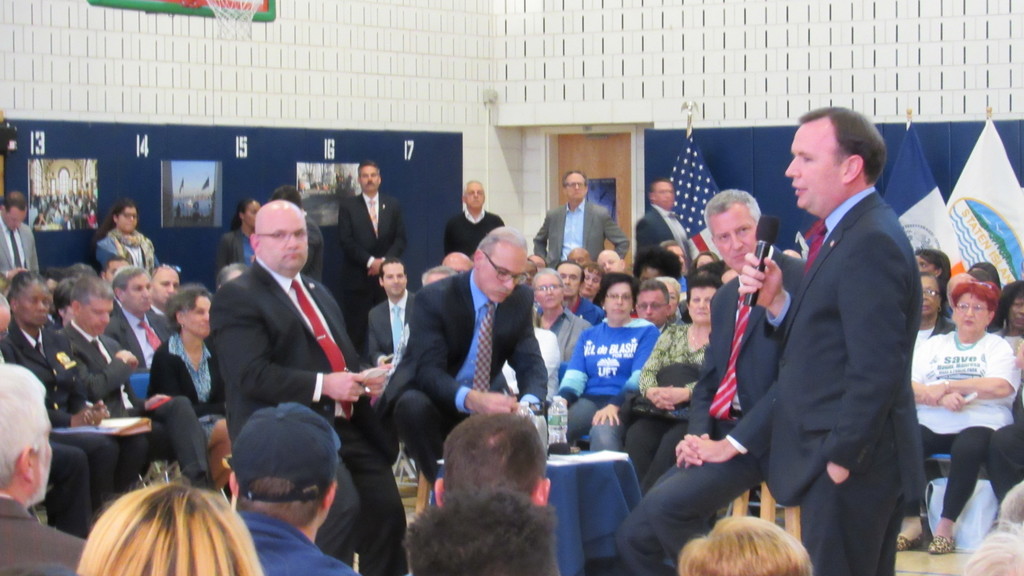 Mayor Bill de Blasio came to Staten Island, the belly of the beast, the borough where he has the least political support, for a town hall meeting on Wednesday night.

And lived to tell the tale.

It was a good night for him and for us (even if it did take de Blasio a while to finally give us a town hall).

De Blasio didn't waste any time addressing a recent controversy: The demise of the Kroc Center, a project slated for Clifton that the Salvation Army scotched after City Hall failed to come up with $20 million in requested funding. It temporarily drove a wedge between de Blasio and GOP Borough President James Oddo, an old friend.

De Blasio met the issue head on, saying he took "personal responsibility" for the debacle, that his administration didn't do all it could.

"We missed the ball on this one, and the buck stops with me," he said.

But he said he'd been in touch with Salvation Army leaders and that he would meet with them and Oddo about getting another Salvation Army recreation center project here.

"Let's get started again, see if we can get on track," de Blasio said.

He added that separate whatever happens with that, the city budget will include money for an indoor pool for the Island.

We complained. City Hall responded. It was a good thing.

But it wasn't just about the issues. It was about de Blasio being here, about him sharing the stage with Oddo and with City Councilman Steven Matteo (R-Mid-Island), both Republicans.

It was about the crowd asking pointed questions, but the event never getting out of control.

De Blasio knows that his liberalism puts him out of step with many of his Staten Island constituents. He talked about knowing Oddo when they both served in the City Council, beginning in 2002.

"We realized that we believed the job was to get things done," de Blasio said. "We found there was plenty we could actually agree on."

Oddo said that he and the mayor have "different political philosophies and ideologies. We have to get over that. We have to get to the core of the matter. We have lots of challenges in this community.

He said whatever problems the Island faces, "can't get fixed without this man and his team."

It was positive seeing him and de Blasio side by side. The relationship between Borough Hall and City Hall is the most crucial in Staten Island government and politics.

Said Matteo, "We don't always agree. With know that. What we can agree on is coming together for solutions."

The town hall came three days after Donald Trump and Hillary Clinton each brought their presidential campaigns to Staten Island, another day when Staten Island was in the spotlight.

On Sunday, Hillary said she would return to the Island as president.

On Wednesday, de Blasio said, "This will not be my last town hall meeting on Staten Island. I look forward to more."

It will be a good thing. He's welcome here.