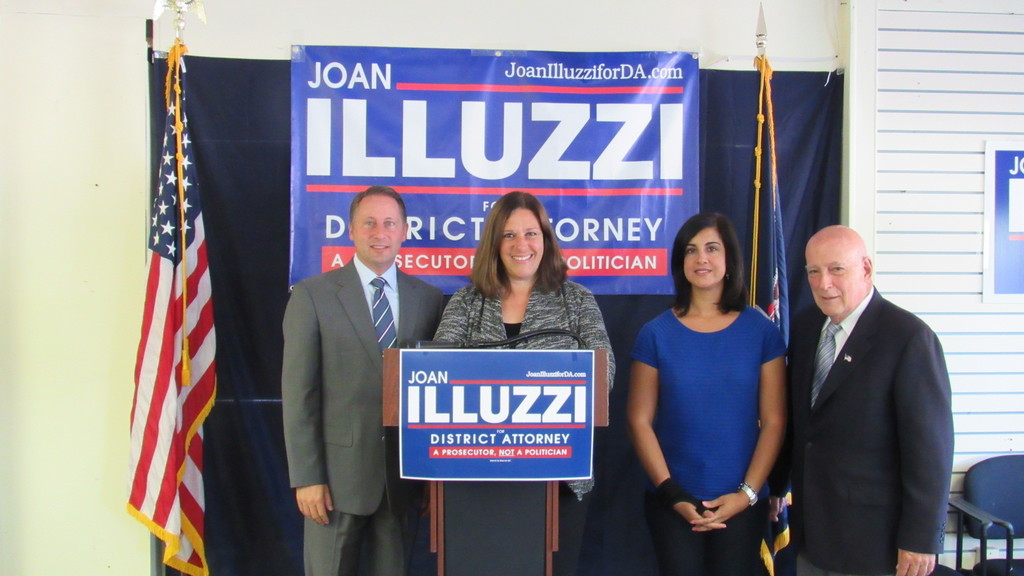 Republican Joan Illuzzi has picked up yet another party line on the November ballot in the race for district attorney.

Illuzzi, who secured the Conservative Party line in an opportunity-to-ballot primary on Sept. 10 against Democrat Michael McMahon, also received the Reform Party line, it was announced Saturday.

In speaking to a small crowd of Illuzzi supporters gathered at the campaign's New Dorp headquarters, Rob Astorino, the Westchester county executive and first candidate to run on the line last year, when he unsuccessfully challenged Gov. Andrew Cuomo, said, "We're lucky to have a candidate with Joan's resume." Astorino called Illuzzi a "public servant, not a politician." Illuzzi had been an assistant district attorney for the Manhattan D.A.'s office for 27 years. "She devoted her life to fight crime," Astorino said. "That's who we want as our district attorney on Staten Island. ... She would be an independent prosecutor and not be soft on crime." Illuzzi thanked Astorino for his support and said as D.A. she would "administer justice without fear or favor."

Assemblywoman Nicole Malliotakis (R-East Shore/Brooklyn) and GOP Party Chairman John Antoniello attended as well. The new Reform Party, founded last year, is not to be confused with the national Reform Party founded by Ross Perot in 1995. The party was originally called the Stop Common Core Party. Party officials changed the name in February to broaden the appeal outside that single issue.

The state Conservative Party opposed the name change, saying there were too many minor parties — Conservative, Independence and now, Reform.

The McMahon campaign criticized Illuzzi getting the party line, calling it the result of a "shady back-room deal" and only accomplished through a "loophole in election law." McMahon spokeswoman Ashleigh Owens in a statement called it "a total affront to open, fair, and transparent elections." Because the party was recently created, there is no county committee to nominate candidates and there are no registered members of the party, so Illuzzi was not required to collect signatures on petitions to secure the ballot line. Speaking in an interview afterward, Astorino said a statewide 15-member committee selected Illuzzi as the candidate to get the party line. It has done the same for about 1,900 other candidates for office this election year.

Responding to the McMahon campaign comments, Astorino said, "That's just sort of ignorance of the law on their behalf and just trying to make it political. The committee selects. There is no petitioning process this year, there will be next year."

Joan Illuzzi, a lifelong Staten Islander, is a 27-year veteran of the Manhattan District Attorney’s office where she served under the legendary Robert Morgenthau and  Cyrus Vance, Jr. In addition, Ms. Illuzzi was named Senior Trial Counsel to Robert Morgenthau in 2000 (a role she continued under Cyrus Vance, Jr.) and was also named Chief of the Hate Crimes Unit in 2010. She resigned her position in the Manhattan DA's office to run as the endorsed Republican party candidate to succeed former Staten Island DA and now Congressman Dan Donovan.

Joan Illuzzi has been endorsed by: