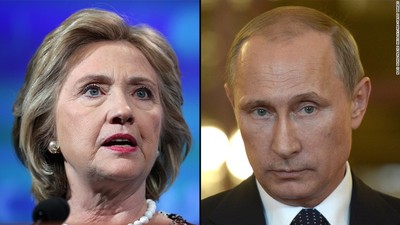 Johnson, on a trade mission to the United States, said that he was struck by the former secretary of state's insistence that Europe must do more to stand up to the Russian leader over Ukraine.

"One thing in particular she really wanted to get across -- that was she thought the Europeans were being too wimpy in dealing with Putin," Johnson said, at a Politico Playbook Breakfast event in Washington.

Stressing he was not quoting Clinton word for word, two days after meeting her in New York, Johnson said that he was impressed by the likely Democratic presidential candidate's "brilliant mastery" of foreign policy.

"She thought in particular that we in Britain should be less dependent on Russian hyrdrocarbons and she thought we should get on with seeking alternative sources," Johnson said.

"Her general anxiety was that Putin, if unchallenged and unchecked, would continue to expand his influence in the perimeter of what was the Soviet Union. She spoke of alarm in Estonia and the Baltic states. I was very, very struck by that."

"I was struck by the firmness with which she wanted us in Britain to stick it, to take it to Putin," he said, once again underlining he was not using Clinton's exact words but offering a "brutal summary" of what she said.

Johnson, who is known for his scruffy shock of blond hair and colorful turn of phrase, said Clinton backed President Barack Obama's strategy on tackling ISIS and thought there was more everybody could be doing to support Kurdish Peshmerga forces fighting the extremist group.

The mayor, who recently visited Kurdish areas in Iraq, quipped that he would not overstate the danger of his trip -- in a reference to NBC newsman Brian Williams who was suspended for six months for exaggerating his experiences during the Iraq war.

"You get in trouble over here .. I was nearish to the front line. I wouldn't say bullets were wanging over my head."

Johnson also said that Clinton was "particularly gracious and charming" in their meeting, considering his comments about her in a Daily Telegraph article in 2007 in which he accused her of "purse-lipped political correctness" and said she reminded him of a "sadistic nurse in a mental hospital."

"She was so nice and so kind that even in that article she found something to agree with," he said Friday.

Johnson also weighed in on the controversy stoked up by a possible Republican presidential candidate Bobby Jindal who said in London last month after the Paris terror attacks that Muslim communities had made parts of the British capital and other European cities "no go areas" for people who did not share their faith.

He said that Louisiana Gov. Jindal and those who shared his views were in need of some "gentle education" on the issue. "I would be more than happy personally to escort Governor Jindal around any area of London that he thinks is a no go zone. It really isn't true, it is complete nonsense ... there are no no go zones and nor will there be."

The flamboyant Johnson, while remaining mayor of London, is running for a seat in parliament at the next UK general election in May, and has long been tipped as a future leader of the Conservative Party and possible future prime minister.