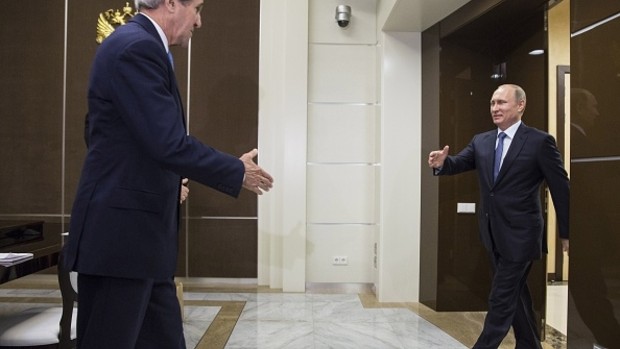 If Russia is intractable on Ukraine and considers the West an adversary in most other areas of global policy, why has U.S. Secretary of State John Kerry come to Sochi to meet with President Vladimir Putin for the first time since Russia invaded Crimea? Most likely, this isn't even a baby step toward a normalization of the Russia-U.S. relationship, but just a sign that the two countries' strategic interaction is close to what game theory calls the ultimate outcome.

The game unfolding between Russia and the West is described in a paper published in the April issue of the journal Peace Economics, Peace Science and Public Policy.  Its authors, economists Richard Ericson and Lester Zeager, readily admit they have no particular regional expertise. To model the interaction using the theory of moves, they read the coverage of the Ukraine crisis in The Wall Street Journal and other major U.S. media. That makes their conclusions all the more remarkable. It seems the logic of the game doesn't really depend much on the personalities, history and emotional baggage.

Moves in the game are unilateral policy changes -- say, Russia invades eastern Ukraine and the U.S. toughens sanctions in response. Instead of making a move, a player can pass or refrain from changing policy. Two consecutive passes by either player end the game.

In Ericson and Zeager's  model, Russia can pursue three basic policies: "let go" (cease interference in Ukraine), "destabilize" (keep aiding separatists as it does now or exert economic pressure) or "invade" (openly send in troops). The three possible Western lines are "business as usual" (turn a blind eye to Russian actions in Ukraine), "sanctions" and "military aid" (to Ukraine, that is). Putin supporters would challenge the authors' description of the starting point in the game: "destabilize" (for Russia) and "business as usual" (for the West), meaning the West wasn't involved in any strategic interaction when Russia started meddling in Ukraine after the overthrow of President Viktor Yanukovych. The official Russian line is that the West aided an illegal coup in Ukraine, forcing Russia to respond. In terms of the game, however, that's a moot point because we know how each side moved for the year following Yanukovych's ouster.

The authors infer from these moves -- correctly, I think -- that Russia is unwilling to "let go" and that it responds angrily to any signs of Western interference. The West, for its part, is generally prepared to react to escalation on Russia's part, but it will choose the weaker response whenever possible. Ericson and Zeager, however, experiment with reordering the sides' preferences. Besides, they noticed that actions by Ukraine -- generally an inert pawn in the big game -- can affect the order of Russian preferences: For example, the Ukrainian army's military successes against the Russian-backed insurgents in the summer of 2014 caused Russia to step up its destabilizing interference.

So the game theorists drew up matrices and decision trees for 13 different scenarios, taking into account all the more or less plausible combinations of moves. The idea is to assign an order of preference-based value to each of the policy lines and calculate the benefit of a series of moves to each player.

The equilibrium for most of these scenarios was "sanctions"/"destabilize." To quote Ericson and Zeager, "Russia destabilizes Ukraine, creating a 'frozen conflict' that blocks the consolidation of a democratic, Western-oriented polity, while the West settles into a stable configuration of ongoing sanctions, punishing Russia, at high cost to itself, for 'bad behavior.'" The second most likely option is "business as usual"/"destabilize," in which "the West believes that preserving a democratic, Western-oriented Ukraine is not worth the cost, again allowing Russia to achieve its geopolitical objectives through successful destabilization."

If one assumes that both sides in the game are rational, they manage to avoid the "coordination trap" in which Russia begins a full-scale invasion and the West steps up military assistance to Ukraine. The assumption of rationality, especially on Putin's part, is something of a leap of faith, but, like the paper's authors, I am prepared to accept it. Rationality, after all, can be defined in terms of economic and geopolitical gain, and Putin is clearly thinking in these terms, whatever he may say on state TV.

In all of Ericson and Zeager's scenarios, the ultimate outcome is reached in just a few moves. In real terms, we may already be at the end of the game. After all, Russia continues to destabilize Ukraine, and the West doesn't intend to lift sanctions. All that remains for the most likely scenario to be realized is the formal creation of a frozen conflict zone, like Transnistria in Moldova, with neither side prepared to let go or escalate any further.

Putin and Kerry are still talking, having kicked out the press immediately after shaking hands. It doesn't matter, however, what the communique after the meeting will say. The outcome of the Ukraine crisis is practically a foregone conclusion if both sides' analysis of possible moves is relatively rational. Kerry has come to Russia so the sides can agree to disagree on Ukraine and move on to other issues such as Syria and Iran, where constructive interaction is still possible.

For Ukraine itself, the role of a pawn for bigger players may be somewhat humiliating, but it shouldn't be. If the country successfully transforms itself into a Western-style democracy with a viable open economy, it can handle the continued Russian destabilization attempts and, in time, make them much less effective. Not being a player in the big strategic game is even, perhaps, to Ukraine's advantage: Once it realizes it can have little effect on the outcome, it can concentrate on solving its internal problems.