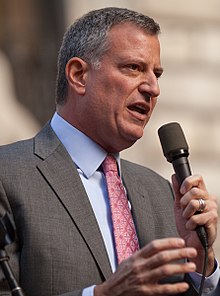 Liberal New York City Mayor Bill de Blasio is rolling out a new plan that would potentially allow the city government to seize buildings of landlords who force tenants out -- a plan his opponents say amounts to “straight communism.”

De Blasio, in his State of the City address on Thursday, announced he wants to take action against landlords who try to force tenants out by making the property unliveable -- and pulled out an executive order to create a Mayor’s Office to Protect Tenants. He said that in the event the government intervenes, the buildings would then be controlled by a “community nonprofit.”

“When a landlord tries to push out a tenant by making their home unlivable, a team of inspectors and law enforcement agents will be on the ground to stop it in time,” he said, according to the New York Daily News. “If the fines and the penalties don’t cut it, we will seize their buildings and we will put them in the hands of a community nonprofit that will treat tenants with the respect they deserve.”

According to the mayor’s website, the city is “pursuing new local law to seize upwards of 40 of the most distressed multiple dwelling buildings annually and transition them to responsible, mission driven ownership.”

The city reportedly has gone easy on problem landlords in the past. The New York Times reported last year that officials have taken a "gentle hand with landlords who deprive tenants of basic services, declining to enforce the maximum penalties for even the worst offenders," detailing how "neglected repairs" end up forcing tenants out.

Republicans, though, were disturbed by the extent of Hizzoner's plan and charged the idea was more suited to communist dictatorships where land and property seizures are commonplace.

“My first reaction was: Is this communist Cuba?” state Assemblymember Nicole Malliotakis, who ran against De Blasio in the 2017 mayoral race, told Fox News. “ I can say that as a daughter of Cuban refugees who fled Castro’s Cuba in 1959, this is what happened to her family, she had her home taken, my grandfather had his gas station taken.”

“This is extreme even for Mayor de Blasio, because we know that he has socialist leanings, but this is straight communism and I think it’s very scary to America-loving, democracy-loving people.”

Malliotakis said the proposal was also hypocritical of the mayor, as she says the city runs some of the worst housing via the NYC Housing Authority. She also expressed some doubt as to how his plan to seize property would fare.

“Any attempt to seize property will face a court challenge and the mayor himself comes up with these ideas, throws stuff out there and doesn’t know how he intends to make it happen,” she said. “It’s all rhetoric.”

The proposal is the latest big-government pitch from the mayor. Earlier this month, he announced plans to launch “the largest, most comprehensive plan in the nation” to guarantee health care coverage for all city residents, including those in the country illegally.”

“Health care is a right, not a privilege reserved for those who can afford it,” de Blasio said in a statement. “While the federal government works to gut health care for millions of Americans, New York City is leading the way by guaranteeing that every New Yorker has access to quality, comprehensive access to care, regardless of immigration status or their ability to pay.”

In an interview with New York Magazine in 2017, he also expressed a desire for much more government control in development and rents, and cited a “socialist impulse.”

MOST DEMOCRATS IDENTIFY AS LIBERAL FOR FIRST TIME, UNDERSCORING LEFTWARD TILT OF PARTY

"I think people all over this city, of every background, would like to have the city government be able to determine which building goes where, how high it will be, who gets to live in it, what the rent will be," he said. "Look, if I had my druthers, the city government would determine every single plot of land, how development would proceed. And there would be very stringent requirements around income levels and rents."

On Sunday, he said in an interview that he wouldn’t rule out running for president in 2020, and urged the Democratic Party to take “bolder” positions similar to his own.

“There is still a lot of moderate voices in the party that did not learn the lessons of 2016 and are not listening to what people need in this country,” de Blasio said. “So I want to push this whole party, and I want to inform this debate in this country about the fact that we could go a lot further, we could be a lot bolder than what we’re doing now.”