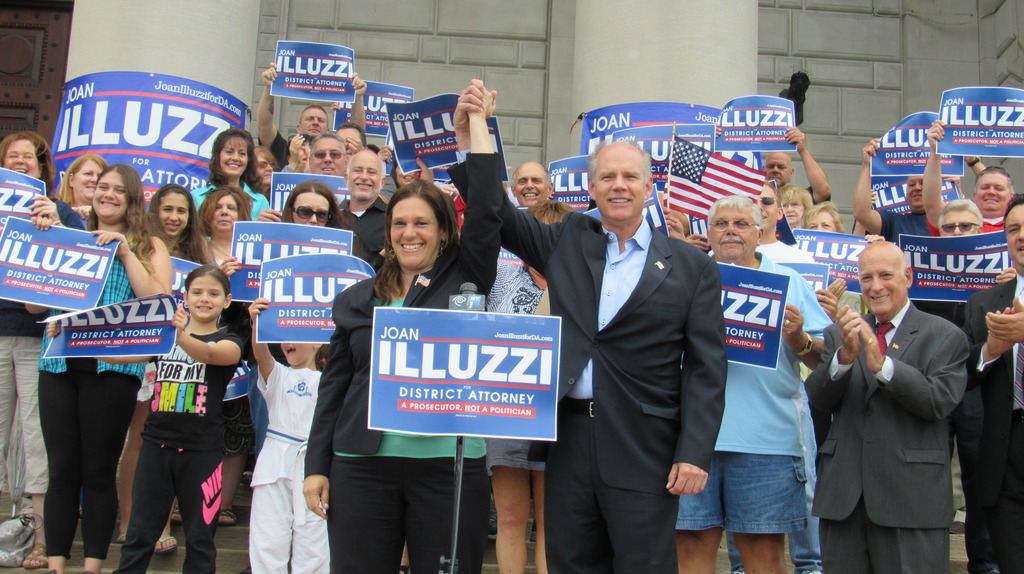 "Joan brings the experience, integrity and judgment necessary to keep Staten Islanders safe," Congressman Donovan said. "Her record of fighting for victims and getting dangerous criminals off our streets is truly second to none. Our public safety is too important to leave in the hands of someone who has never prosecuted a case. Joan will not only continue the good work we've done, but she will bring her unique skill-set to the people of Staten Island. She has my unequivocal support and I urge everyone to join me in helping to elect her as our next district attorney."

Ms. Illuzzi and Congressman Donovan, both lifelong Staten Islanders, were joined by dozens of Illuzzi supporters and volunteers at today's press conference on the steps of the Richmond County Courthouse in St. George. Before his recent election to represent Staten Island and southern Brooklyn in Congress, Dan Donovan served as Staten Island District Attorney between 2004 and 2015. Ms. Illuzzi and Congressman Donovan began their prosecutorial careers in the late 1980's when they both worked for the legendary Robert Morgenthau in the Manhattan District Attorney's Office.

"The people of Staten Island know that few have done more to keep our streets safe and to support the brave men and women of our law enforcement community than Dan Donovan, so I'm honored to have his endorsement and support," Ms. Illuzzi said. "As our next Staten Island District Attorney, I will work tirelessly to continue and expand upon his outstanding legacy of dedication and results for the people of our wonderful borough."

"This is a very personal endorsement for me because I dedicated the last 12 years of my life to transforming the Staten Island DA's office," Congressman Donovan went on to say. "We took an office from last place in felony convictions to first. We cracked down on sexual predators, repeat drunk drivers and violent criminals. Those policy decisions helped make Staten Island the safest community in the safest big city in America, and it's critical that the next person who leads this office continues to build on those successes."